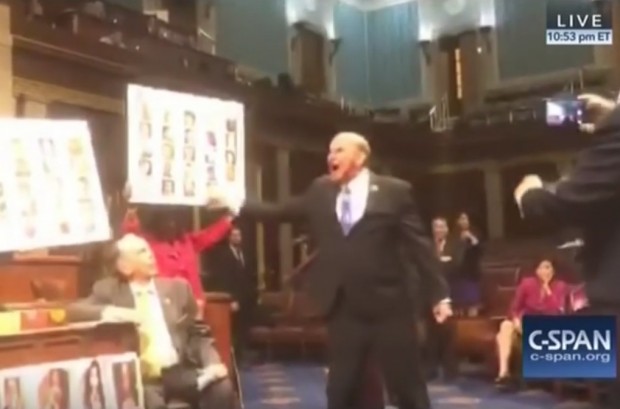 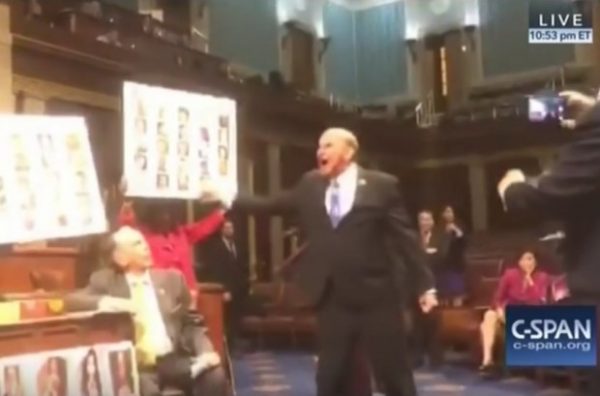 On Wednesday, House Democrats held a gun control sit-in, and Republican Representative Louie Gohmert (LA) had enough when challenged by Democrat Rep. Brad Sherman (CA) over the issue of the Orlando shooting and what brought it about. According to Gohmert, it wasn’t about guns, but rather about the ideology known as Islam.

“It appears the gentleman is afraid to vote and afraid to debate,” Sherman thundered as fellow Democrat congressmen cheered him on. “And given the weakness of his arguments and his position, his fear is well founded.”

However, Gohmert was having none of it and rushed the floor and pointed to the victims of the Orlando shooting and declared, “Radical Islam killed these poor people!”

While much of Rep. Gohmert’s comments were indiscernible, he managed to repeat the phrase about “radical Islam.”

During Gohmert’s outburst, he pointed at a poster of victims of the Orlando shooting being held by Rep. Corrine Brown, the Democrat who represents the part of Orlando where the shooting took place.

Gohmert and Brown got into a heated conversation and had to be physically separated by colleagues.

Sherman said a few more words and was replaced by Rep. Zoe Lofgren (D-San Jose), who tried to defuse the tension in the room.

"We are facing an extraordinary bloodbath in our country," @RepZoeLofgren tries to calm the chamber with a personal story.

Part of the problem is in our vocabulary.

First, while I can appreciate Rep. Gohmert’s passion, he is wrong. The problem is not “radical Islam.” It’s simply Islam.

As Pamela Geller rightly said, “All infidels… The Islamic imperative is to subjugate all infidels under the hegemony

“The political and media elites are lying to us constantly about Islam. It is no wonder that so many Americans are ignorant and complacent about the jihad threat,” said Geller. “But because Islam is indeed the real problem, Trump is so popular. He is the first presidential nominee — or presumptive nominee at this point — since John Quincy Adams

even to come close to speaking honestly about this threat.”

“They keep having to club us over the head with this so that we ignore what we see in the daily headlines — Orlando is just the latest example,” she concluded. “They’re banking on no one actually reading the Qur’an

, because if they did, the lies would be exposed.”

Finally, we must begin calling the party people out for who they really are. In most cases, Democrats in DC are nothing more than Communists, not all, but most. Many Republicans talk a good game about smaller government, but they are happy to grow government when it becomes a police state or when it comes to certain aspects of Socialism.

Enemies abound in America. While Rep. Gohmert needs to do a little tweaking on some of his rhetoric, I do believe he at least is drawing attention to a real problem in our country and that if the rise of the anti-Christ, totalitarian ideology of Islam.