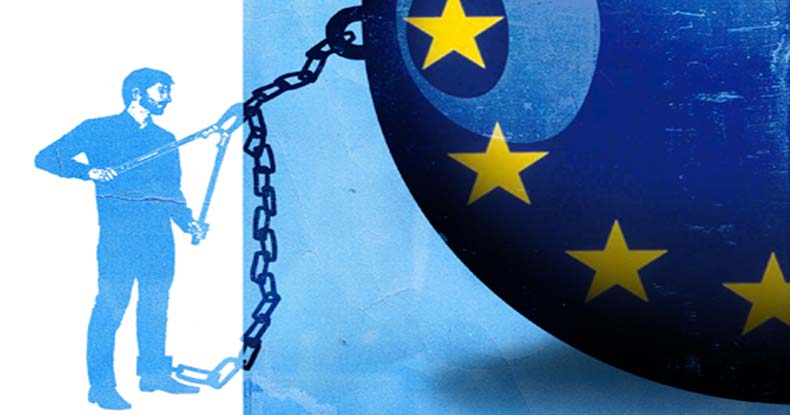 A Brexit domino effect could effectively end the European Union once and for all as five more countries may seek to follow Britain’s lead, according to the German newspaper Die Welt.

Germany fears France, Austria, Finland, the Netherlands and Hungary may follow the UK and leave the EU, the government paper says.

As it stands now, since Brits will no longer be forced to pay taxes to the EU, Germany’s fair share will be increased by 3 billion euros a year.

Not wanting to shell out the extra cash, Germany is recommending that the EU enters into negotiations aimed at making the UK an “associated partner country” for the remaining 27 nations — rendering Brexit impotent.

While some of the intentions and promoters behind Brexit certainly have ties to anti-Muslim immigration, the idea of decentralizing power tends only to further the cause of freedom. And, freedom is contagious.

Politicians in Hungary voiced their concerns about EU dictates as well on Friday.

“Brussels must hear the voice of the people, this is the biggest lesson from this decision,” Hungarian Prime Minister Viktor Orban told public radio.

The European Union is nothing more than unelected bureaucrats seeking to amass power and then use that power to force other countries to do their bidding. Unfortunately, it took a refugee crisis, essentially created by the West and the EU, to wake Europeans and their leaders up to this fact.

Regardless of their reasons for leaving the EU, the UK has set off a potential catalyst for change that will inevitably lead to a more free world.

The spreading of freedom, however, is an enemy to tyranny, and the global elite will not go quietly. When a secession happens, it is usually followed by revenge and attacks.

Former secretary of the treasury and economist Dr. Paul Craig Roberts has predicted what is to come.

The British people, or a majority of them, gave Washington the bird. But the fight is not over. Perhaps it hasn’t really yet begun. Here is what the British can likely expect: The Federal Reserve, European Central Bank, Bank of Japan, and George Soros will conspire to attack the British pound, driving it down and terrorizing the British economy. We will see who is the strongest: the will of the British people or the will of the CIA, the One Percent, and the EU and neocon nazis.

The coming attack on the British economy is the reason that leave supporters such as Boris Johnson are mistaken in their belief that there is “no need for haste” in exiting the EU. The longer it takes for the British to escape from the authoritarian EU, the longer Washington and the EU can inflict punishment on the British people for voting to leave and the more time the presstitutes will have to convince the British people that their vote was a mistake. As the vote is nonbinding, a cowardly and cowed Parliament could reject the vote.

George Soros exposed the dependence of the elite on the EU when he took to fearmongering about rampant financial collapse upon Brexit and he issued threats backing up Roberts’ predictions.

“The Brexit crash will make all of you poorer — be warned,” Soros penned in an op-ed for the Guardian on June 20. “My 60 years of experience tells me the pound will plummet, along with your living standards. The only winners will be the speculators […]

“A vote to leave could see the week end with a Black Friday, and serious consequences for ordinary people.”

The big investment banks were also hit hard with Goldman Sachs shares down 5.26%, and Morgan Stanley shares dropping 8.57% to $24.94.

The global banking industry is entirely dependent on centralization of power to keep their balance sheets in order as their model requires a controlled economy and war. However, as Brexit has already shown, this model is not in the interests of the people. As nations continue to declare their independence, the cartel will crumble.

The predictions of a Brexit domino effect need to turn into actions before this momentum is lost. If the people give into the financial terrorism and scaremongering by the banking elite and their puppet politicians, any chance for independence could be lost in fear.

As Roberts points out, Cameron should step down immediately, not months from now in October. The new British government should tell the EU that the British people’s decision is implemented now, not in two years and that all political and legal relationships terminated as of the vote. Otherwise, in two years the British will be so beat down by punishments and propaganda that their vote will be overturned.

The British government should immediately announce the termination of its participation in Washington’s sanctions on Russia and hook its economy to the rising nations of Russia, China, India, and Iran. With this support, the British can survive the Washington led attack on their economy.