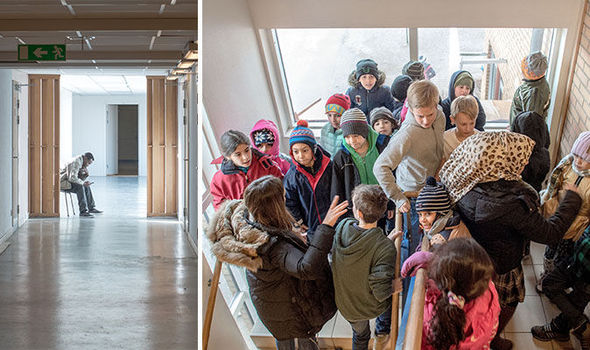 Another young girl slaughtered by savages– her dead body found in a bedroom of a refugee center. But do not speak ill of them, you brutes, you’ll hurt their feelings. The primary concern of the EU is for the Muslim migrants, not their own citizens.

They send these innocent girls to work in these refugee centers, like sheep to slaughter.

The fact they Sweden did not halt all Muslim immigration after Alexandra Mehzer’s savage murder demonstrates that they are already dead.

Another young Swedish girl murdered –I blame the leftist elites who put this girl in jeopardy, who lie about the “poor refugees” and who misinform their populations about the very real threat this invasion poses.

Her death is the fourth alleged murder at a Swedish asylum centre this year.

A MURDER enquiry has been launched after a young woman was found dead in an asylum seeker’s hostel.

The 25 year old was found with serious injuries in a bedroom at the hostel in Jönköping, southern Sweden.

Police were called at 1.30pm on Sunday to the scene and shortly after found the dead woman.

Her death is the fourth alleged murder at a Swedish asylum centre this year.

The circumstances in which the police found her body have led them to launch a murder enquiry into her death.

They have not yet released her nationality.

One person has been taken in for questioning.

Other residents at the asylum are currently being questioned as police remain on site.

The hostel remains closed off as crime scene investigators and the coroner search the site for evidence.

Sweden, with a population of 9.8million, has been struggling with the European migrant crisis and took in more than 160,000 asylum seekers last year.

In March, a 19 year old man was stabbed to death at an asylum seeker’s centre near Lindesberg, central Sweden.

He was taken to hospital but died in the morning of March 4 from his injuries.

At the time Stefan Wickberg, a Lindesberg police spokesman, said: “Asylum centres have been a problem for us and we have had frequent calls to sort out fights and other disturbances.

“People in these centres live too close together and many of them come from war zones. It’s not easy for them to all get along.”