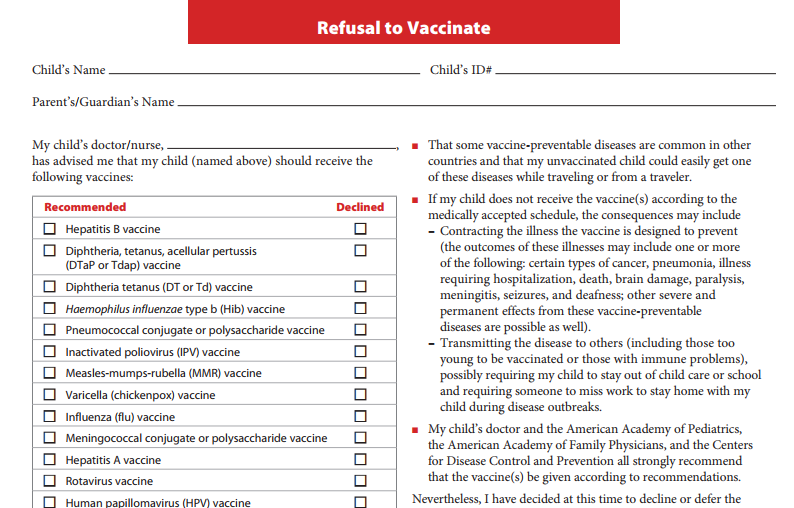 The new vaccine refusal form, produced by the American Academy of Pediatrics to be handed out in doctor’s offices across the country to parents who don’t want to vaccinate their kids, essentially forces those parents to incriminate themselves and “admit” that by signing they are knowingly putting their child’s life and health at risk, in addition to the lives and health of others who come into contact with their non-vaccinated child.

“I know that failure to follow the recommendations about vaccination may endanger the health or life of my child and others with whom my child might come into contact,” the form says.

Edgy Truth reports, “… it is a total propaganda sheet about the alleged value of vaccines, the alleged ‘risk’ of not vaccinating and, even worse, the parent who signs the form is falsely ‘admitting’ that they are putting their children at risk.”

Those who sign the form will, of course, be databased for it as well; the form itself even includes a line for the “child’s ID number”. Can you imagine all the ways such a form could be used against parents? It makes it seem as if not vaccinating a child is tantamount to neglect and endangerment, after all. It’s basically like signing a child abuse confession.

You can see where this kind of thing is headed as well; if, one day, it is declared that denying vaccinations is no longer a parent’s right, states could use such information to force vaccinations on kids the way that some states have forced chemotherapy on Amish children whose parents refused the treatment for more natural options.

Not only that, but if someone happens to come down with a vaccine preventable disease around the child, would the parent be able to be held personally liable for damages? That parent would have signed a piece of paper essentially saying so without any further proof required.

In short, who in their right mind would sign this??

(Funny the news comes out right at the same time the CDC admits that FluMist, given to kids under eight because it is supposedly more effective than the shots, is actually only an abysmal three percent effective.)