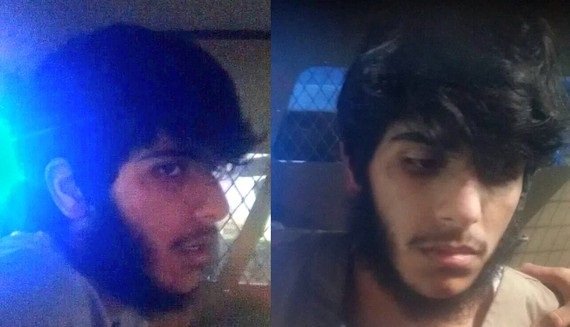 Twin brothers wanted to join ISIS and their parents objected. But Muslims mean business when they say “fidaka abi wa-ummi ya rasul Allah” (I sacrifice my father and my mother for you O messenger of Allah). “Sacrifice” means sacrifice and “mother” means mother, especially in the Muslim holy month of Ramadan.

This is why the two (identical twin) brothers in Riyadh Saudi Arabia began to slaughter their entire family, killing their mother and seriously injuring their father and elder brother by using a cleaver.

The Saudi twins, Khalid and Saleh Al Areeni, first stabbed their mother with a cleaver and sharp knives before turning on their father. They then chased their elder brother and stabbed him, too – multiple times, as well. Having thought the entire family was finished, the twins fled the scene in a stolen car.

The two stabbed men were critically injured and taken to hospital, while the woman died on the spot.

After a large-scale manhunt, police caught the brothers some 100km (62 miles) from the capital. According to a statement issued by the Saudi interior ministry, the crime was premeditated and the twins were found to be loyal to IS.

Lajeen Imran, an expert on Islamic Jihad, said that this Takfiri view think like this:

The phenomenon of sacrificing parents, if they oppose joining Jihad, is not only etched in Islam, but is being promoted in Islamic songs presented with modern appeal. The group Birds of Heaven go all over the Muslim world singing:

“We will bring back the glory of Islam … may I be slaughtered instead of you [Muhammad]” the song goes. It is the opposite of Christ who was slain for us.

“Fidaka abi wa-ummi” (sacrifice my father and mother). If one examines how this message is on youtube and sees how many different flavors, sermons, and songs … this message is permeating the youth.

Even children’s books tell the story of how The Prophet Muhammad named ten men whom he himself guaranteed would be in Paradise including Abu ‘Ubaidah bin Al-Jarrah, who even killed his own father during Jihad.

This is Islam. This is life under Islam where baby spiders eat the mother. Any questions?