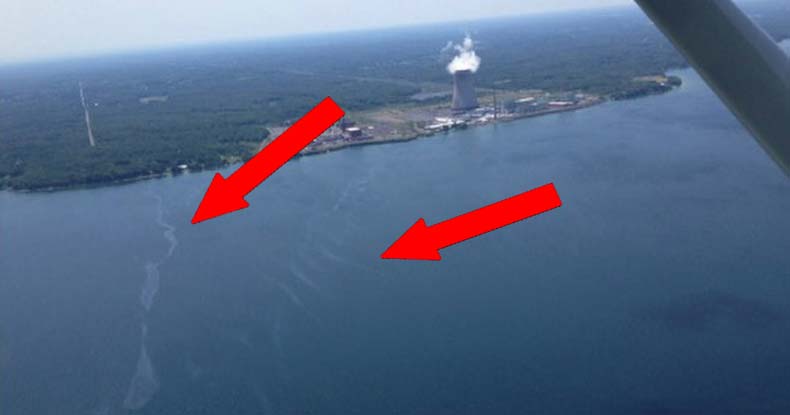 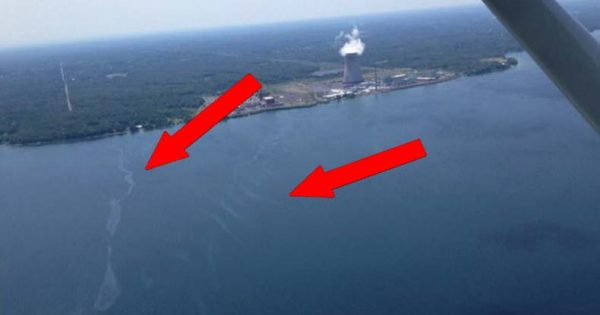 Scriba, NY — US Coast Gaurd officials have cordoned off a portion of Lake Ontario this week, after aerial spotters found a visible “sheen” that is coming from a nuclear power plant in upstate New York.

The Coast Guard Auxiliary aircrew first noticed the sheen on Sunday. Shortly after, a boat crew from the Oswego station tested the sheen and a “temporary safety zone” was put in place.

The Free Thought Project spoke to the Coast Guard Sector Buffalo Command Center on Tuesday and confirmed that the zone was still closed off, and there is no information as to when it will reopen.

The oil sheen is said to be coming from the vent for the hydrogen seal system of the Fitzpatrick plant is in Scriba, New York, approximately 10 miles northeast of Oswego.

According to the Democrat and Chronicle, Entergy Corporation, which operates the plant, found the source of the oil on the roof of a turbine building, said Neil Sheehan, a public affairs officer for the NRC.

“It appears about 20 to 30 gallons that leaked were then drained through the plant’s discharge drain system to the lake,” said NRC public affairs officer Neil Sheehan. “The company has placed oil-absorbent pads on the turbine building roof and has also stopped all circulating water pumps to eliminate any further discharges.”

Despite the miles-long spill coming from their nuclear power plant, Entergy is claiming that the sheen has not impacted the operation of the plant.

It appears that this Fitzpatrick leak is likely the least worrisome of current leaks popping up around the country.

To give you an idea of the scope of the crisis facing America’s aging nuclear infrastructure, a startling investigation by the Associated Press found radioactive tritium leaking from three-quarters of all commercial nuclear power sites in the United States.

As the Free Thought Project reported last month, a major nuclear disaster is unfolding in Washington state at what is known as the Hanford nuclear site. There have been reports that the Hanford has been leaking massive amounts of radioactive material for over two weeks.

Only a week after 19 workers were sent for medical evaluation after waste tank they were moving was found to be leaking, 3 more workers have reportedly been injured at the site. The workers reportedly inhaled radioactive fumes – the same issue facing the 19 previously hospitalized workers, according to reports, bringing the total number of workers injured at the site up to 22.

On top of the Hanford disaster, in recent months, a fire at the Bridgeton Landfill is closing in on a nuclear waste dump, according to a Missouri emergency plan recently distributed by St. Louis County officials. The landfill fire has been burning for over five years, and they have been unable to contain it thus far.

There are clouds of smoke that have been billowing from the site, making the air in parts of St. Louis heavily contaminated. In 2013, Missouri Attorney General Chris Koster sued Republic Services, the company responsible for the landfill, charging the company with neglecting the site and harming the local environment.

Last year, city officials became concerned that the fire may reach the nearby Lake Landfill, which is littered with decades worth of nuclear waste from government projects and weapons manufacturing. Remnants from the Manhattan Project and the Cold War have been stuffed there for generations. The site has been under the control of the Environmental Protection Agency (EPA) since 1990, but they failed to make any significant effort to clean up the waste.

To add to the legitimacy of the residents’ worries about the government’s timeline, the ground has yet to be broken, the fire is still smoldering, and the EPA just finalized, on Thursday, an Administrative Settlement Agreement and Order on Consent (Settlement) requiring Bridgeton Landﬁll, LLC to start work on the isolation barrier system at the West Lake Landﬁll Superfund Site.

Aside from the threat of the U.S. military’s decades-old nuclear waste erupting into flames in the near future, there are also two nuclear reactors inside the United States, which have been leaking for months.

“We now know exactly where the pollution is coming from, and we have a tracer that shows it’s in the national park,” said Laura Reynolds. Reynolds is an environmental consultant who is working with the Tropical Audubon Society and the Southern Alliance for Clean Energy, which intend to file the lawsuit, according to the Times. “We are worried about the marine life there and the future of Biscayne Bay.”

Fifteen hundred miles north of the leaking reactors in Florida is the Indian Point nuclear power plant in New York. Since the beginning of this year, there’s been an uncontrollable radioactive flow from the Indian Point nuclear power plant that continues leaking into groundwater, which leads to the Hudson River, raising the specter of a Fukushima-like disaster only 25 miles from New York City.

While the U.S. war machine spends hundreds of billions of dollars per year waging war against humanity, Americans at home are dying from a crumbling nuclear infrastructure. The realization that multiple nuclear disasters are currently unfolding across the country, while the mainstream media remains silent, speaks to the fact that most media is owned by the same benefactors that have a vested interest in maintaining the status quo.