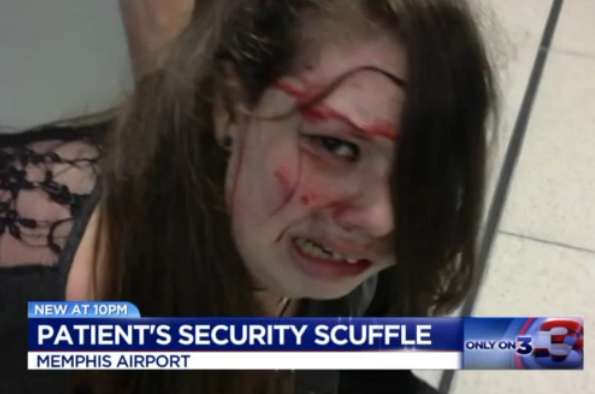 Yet another example of an innocent American attempting to travel by plane in the U.S. (Pic: WREG)

It seems people aren’t just suing the TSA for missing their flights these days.

An 18-year-old partially deaf girl, blind in one eye and with limited ability to walk and talk, spent 17 years of her life travelling between Chattanooga and Memphis for treatment of her brain tumor at a children’s hospital. Her last experience returning home from treatment via the Memphis Airport, however, left her beaten, bloodied, and locked up in a Shelby County jail like the potential terrorist the TSA thinks she is.

When Hannah went through the metal detector at the airport, an alarm went off. Disoriented by the noise, she did not immediately cooperate with TSA agents who asked to conduct further screening.

Shirley Cohen tried to inform the agents about her daughter’s disabilities, she told television station WREG, but airport police kept her away. That’s when the situation between Hannah and the TSA officials became violent:

“She’s trying to get away from them but in the next instant, one of them had her down on the ground and hit her head on the floor. There was blood everywhere,” said [Shirley].

The family is suing for a “reasonable sum not exceeding $100,000 and costs.” Reason reports that when asked about it, (an apparently heartless) TSA spokeswoman responded with, “passengers can call ahead of time to learn more about the screening process for their particular needs or medical situation.”

Oh really? Can they call ahead to learn more about how TSA agents have little to no discernment whatsoever between a suspected terrorist and a scared teen with mental and physical disabilities? Can a traveler call to find out just what kind of abuse they are most likely to receive from TSA thugs if they are already unfortunate enough to suffer from a “medical situation” when they are going to fly on a plane?

Versions of this same story come out of airports so often, the nation has sadly gotten used to this open show of innocent Americans being beaten like slaves at airports.