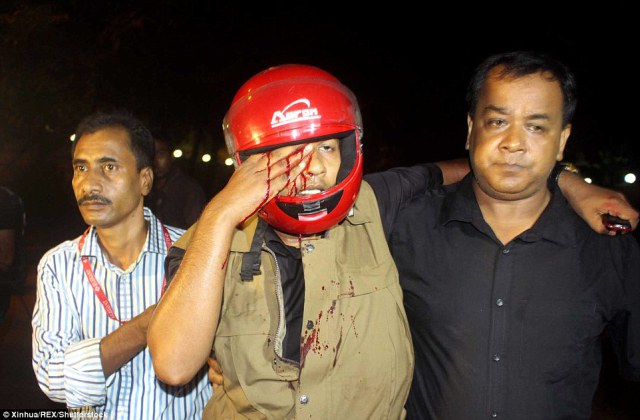 Muslims testing their victims’ Qur’anic knowledge in order to separate the Muslims from the non-Muslims (and apostates) for slaughter. If you recall, devout Muslims did this at the Westgate Mall, the Mumbai massacre (Jews got it the worst), Mali, Tunisia beach massacre, (even in Michigan) etc. The jihadis in Dhaka hacked 20 people to death, sparing only those who could recite the Qur’an, before engaging police in a 12-hour standoff. Clearly Muslims who could not recite Qur’an are considered apostates, and apostasy is punishable by death under the Sharia. The Islamic State means to purge the ummah of lapsed Muslims (apostates).

Islam is the problem.

[One eyewitness] detailed to his father Rezaul how the gunmen – who were armed with automatic weapons, bombs and makeshift machetes – had split the diners into two groups.

Rezaul said: ‘(The foreigners) were taken to the upper floor and the Bangladeshis were kept around a table.’

He said his son told him the terrorists ‘did not hit people who could recite verses from the Koran. The others were tortured’.

He added: ‘The gunmen asked everyone inside to recite from the Koran. Those who recited were spared. The gunmen even gave them meals last night.’

Cue Obama now for his “Islam is peace” speech and how this has nothing to do Islam. Obama is as much a part of the problem as the jihadis.

By Chris Pleasance and Mia De Graaf For Dailymail.com and Imogen Calderwood For Mailonline, 2 July 2016

At least three American students have been identified among 20 people killed during an ISIS attack on a cafe in Bangladesh yesterday.

Abinta Kabir, a student at Emory University who was from Miami, Florida, died when terrorists attacked the largely foreign crowd inside the Holey Artisan Bakery in Dhaka last night.

Fellow Emory student Faraaz Hossain, who attended the college’s business school, was also identified as being among the dead by a spokesman today. Tarushi Jain, 19, who studied at University of California Berkeley campus, was also killed.

SCROLL DOWN FOR VIDEO

Abinta Kabir, an American student from Miami, Florida, has been identified as one of the 20 foreigners killed during the ISIS attack on a cafe in the Bangladeshi capital of Dhaka last night

Kabir (far right), an undergraduate student at Emory University, Georgia, was visiting family and friends in Bangladesh at the time of the attack, a university spokesman said

Kabir died alongside Faraaz Hossain (right) who was originally from Bangladesh but had also been studying at Emory University, attending the college’s business school as a post-graduate

Kabir, a sophomore at Emory’s Oxford campus, was an American citizen, while Hossain was born in Bangladesh and Jain was of Indian origin.

A spokesman said: ‘Emory University has learned that two Emory students, Abinta Kabir and Faraaz Hossain, were among those taken hostage and murdered by terrorists yesterday in the attack in Dhaka, Bangladesh.

‘Abinta, who was from Miami, was a rising sophomore at Emory’s Oxford College.

‘Faraaz, who was from Dhaka, was a graduate of Oxford College and a student at the university’s Goizueta Business School.

‘The Emory community mourns this tragic and senseless loss of two members of our university family.

‘Our thoughts and prayers go out on behalf of Faraaz and Abinta and their families and friends for strength and peace at this unspeakably sad time.’

According to witnesses a group of seven Islamist radicals stormed the cafe yesterday evening armed with assault weapons, pistols and ‘sharp objects’ before taking more than 30 people hostage.

The terrorists then hacked 20 people to death, sparing only those who could recite the Koran, before engaging police in a 12-hour standoff.

The cafe was eventually stormed by elite Bangladeshi commandos who killed the attackers and freed the remaining hostages.

Among those killed are nine Italians, as well as tourists from Japan, South Korea, and India. 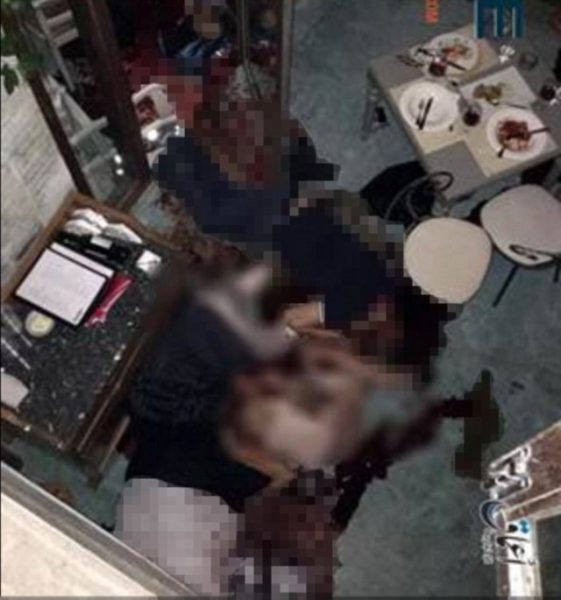 Gruesome: This is one of the images that was released by ISIS’ media agency Amar, purportedly showing victims inside the Dhaka restaurant which was taken siege by Islamist militants on Friday night 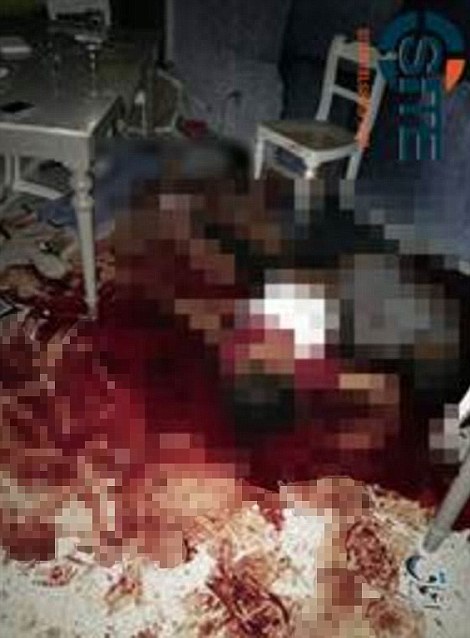 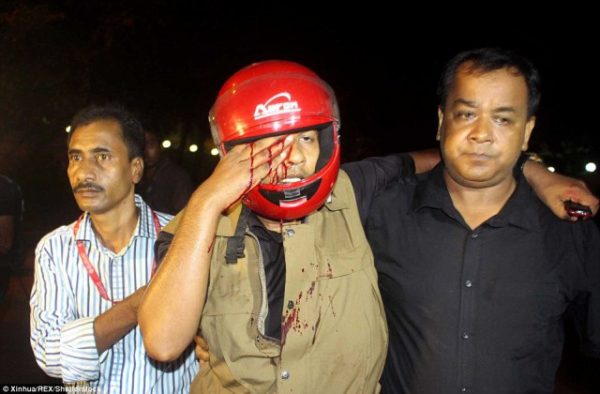 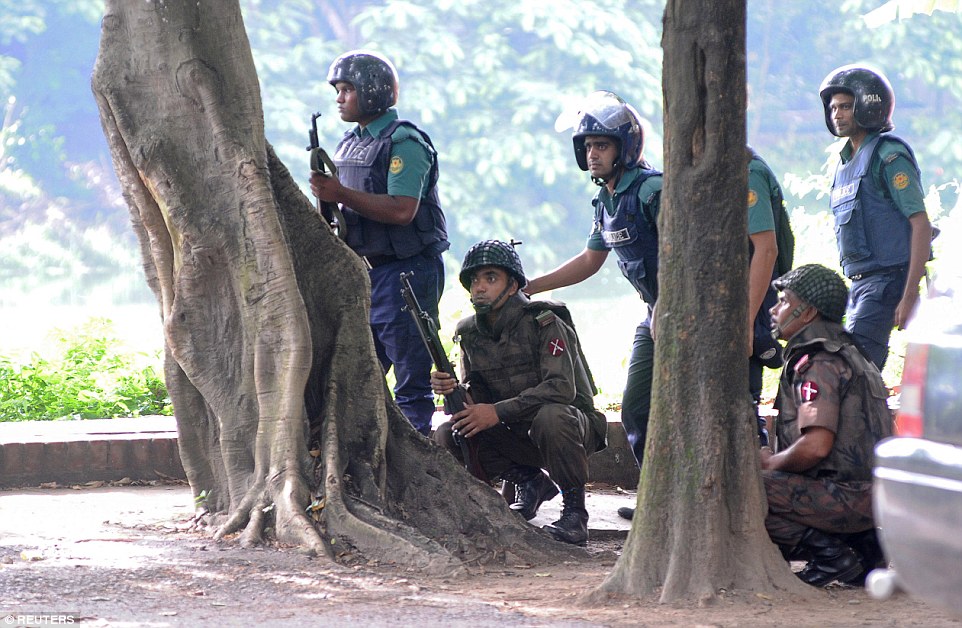 Today, soliders took up positions around the restaurant in case there were any further attacks 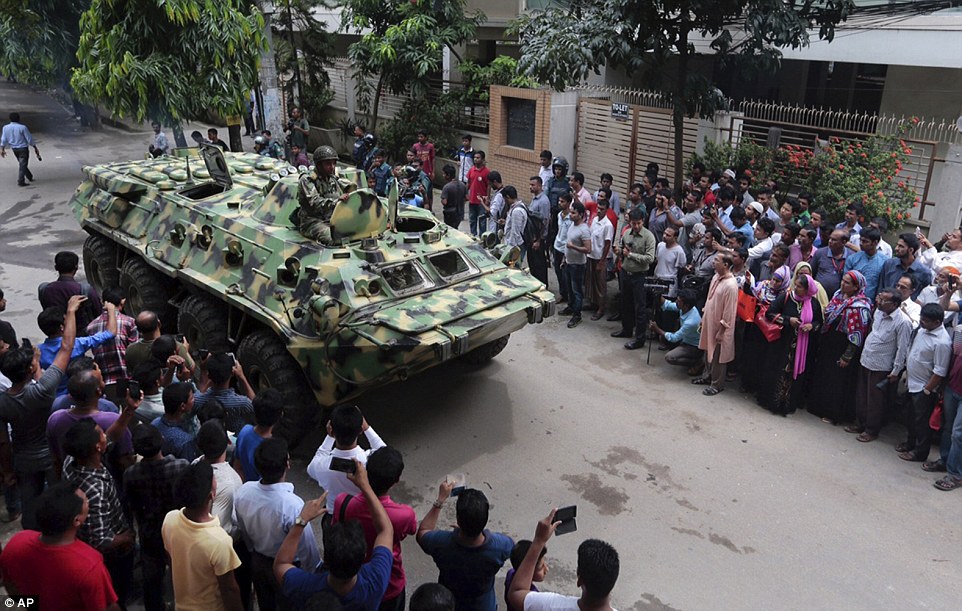 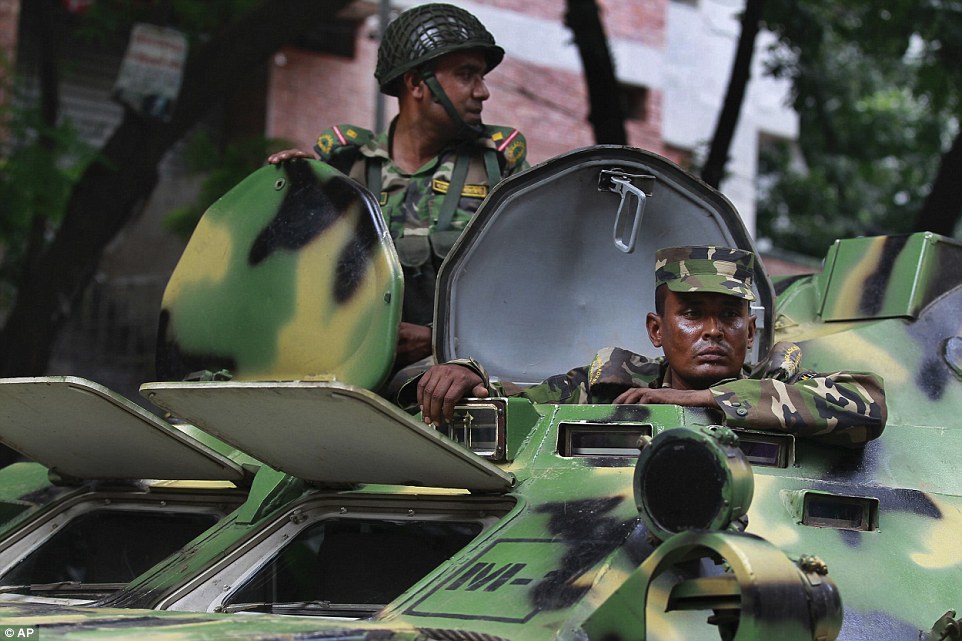 She also thanked all those who had expressed their solidarity with Bangladesh, and vowed that terrorism would be exterminated at all costs.

She added: ‘Anyone who believes in religion cannot do such act. They do not have any religion, their only religion is terrorism.’

On Friday night, Hasnat Karim had brought his family to celebrate his daughter’s birthday.

Hasnat was too traumatised to say more than a few words about his ordeal, saying only that the hostage-takers ‘did not misbehave with us’.

But he detailed to his father Rezaul how the gunmen – who were armed with automatic weapons, bombs and makeshift machetes – had split the diners into two groups.

Rezaul said: ‘(The foreigners) were taken to the upper floor and the Bangladeshis were kept around a table.’

He said his son told him the terrorists ‘did not hit people who could recite verses from the Koran. The others were tortured’.

He added: ‘The gunmen asked everyone inside to recite from the Koran. Those who recited were spared. The gunmen even gave them meals last night.’ 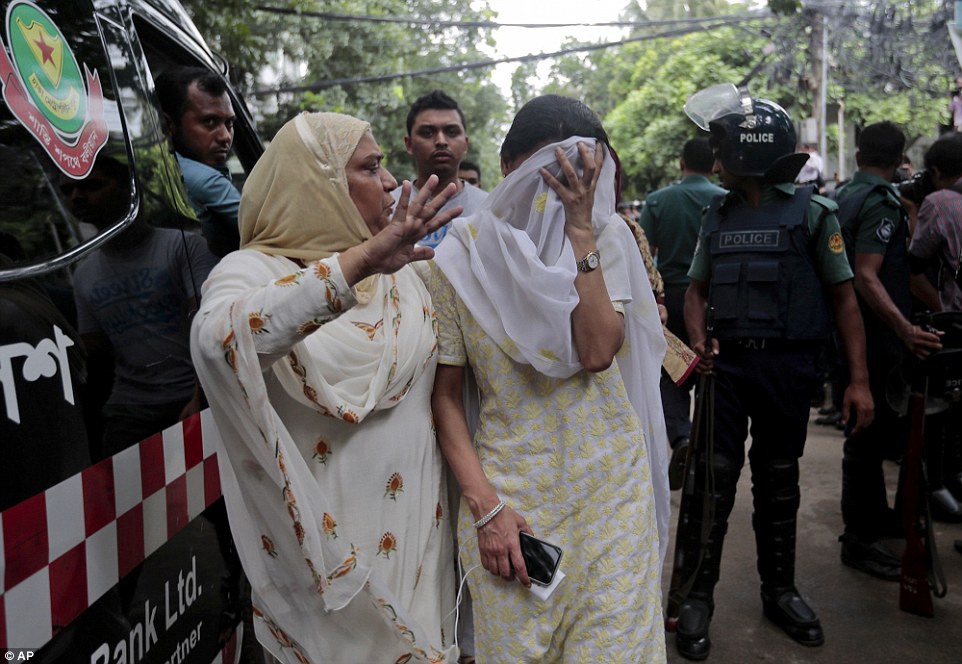 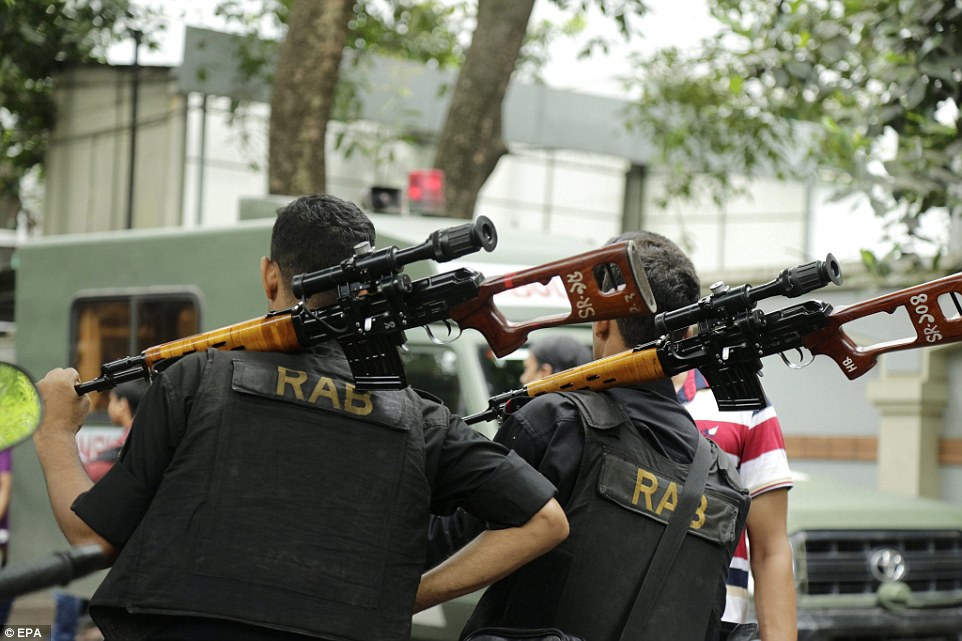 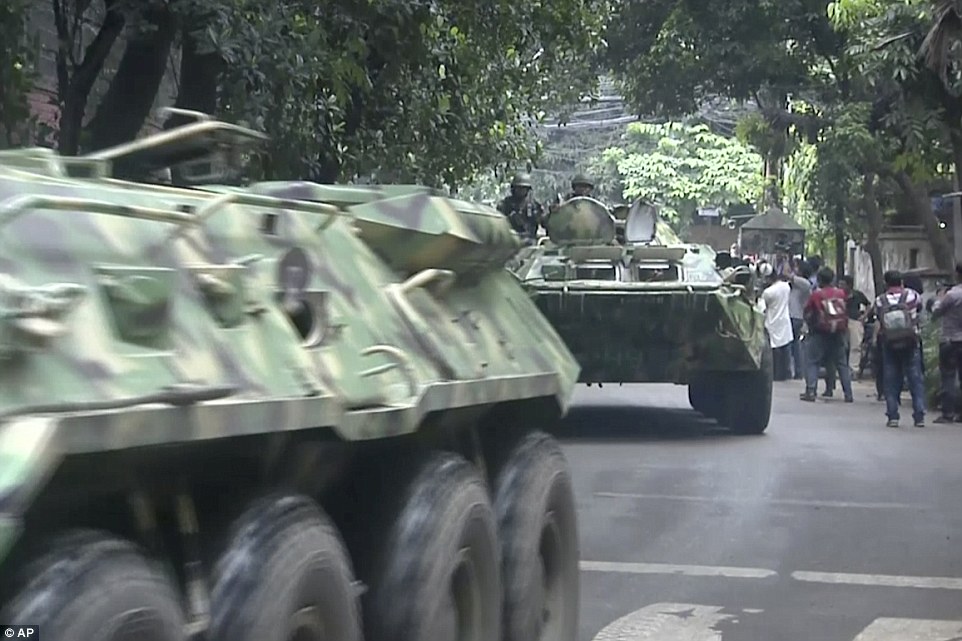 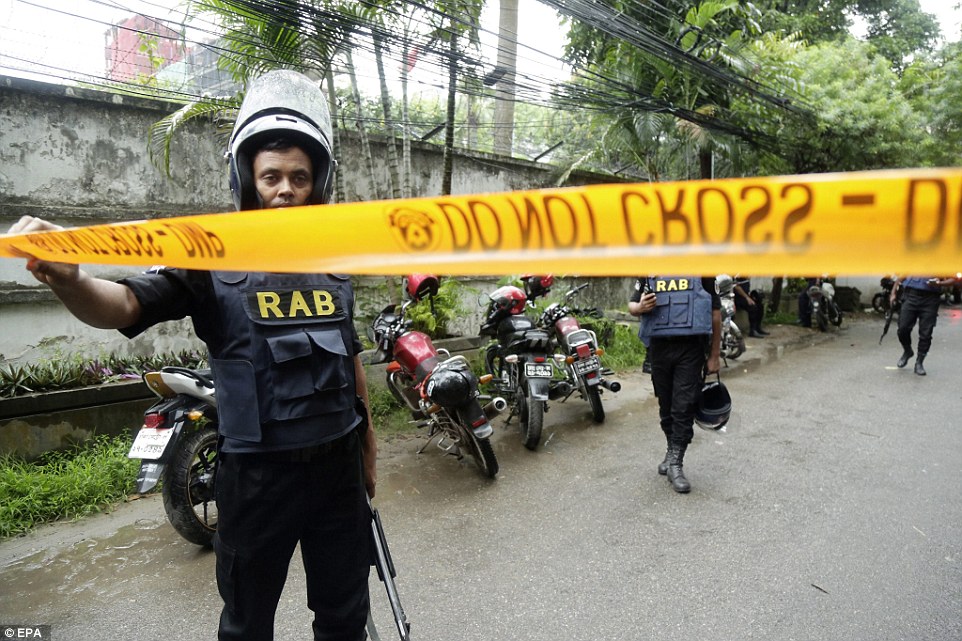 Elite Bangladeshi commandos stormed the building after siege of more than 12 hours, freeing some 13 hostages, in addition to another eight who manged to flee during the siege. Six of the terrorists were shot dead and one was arrested at the scene.

The ISIS media wing has claimed responsibility for the attack which was launched on the final Friday of Ramadan, as millions of Muslims prepare to celebrate the Eid holiday. The final ten days of Ramadan are the most solemn in the Islamic calendar.

Two police officers were killed, including a local police station chief, Mohammed Salahuddin, who was earlier injured in the shoot-out.

According to a local photojournalist, Mr Salahuddin was asked by his colleagues not to cross the cordon as he was not wearing a bullet-proof vest.

Just moments after he crossed the line, according to the Daily Star in Dhaka, he was shot.

Another 25 officers and one civilian are being treated for injuries from gunshots and shrapnel, with 10 people in a critical condition, according to hospital authorities.

ISIS has claimed responsibility for the attack, according to SITE Intelligence Group, which monitors jihadist activity. 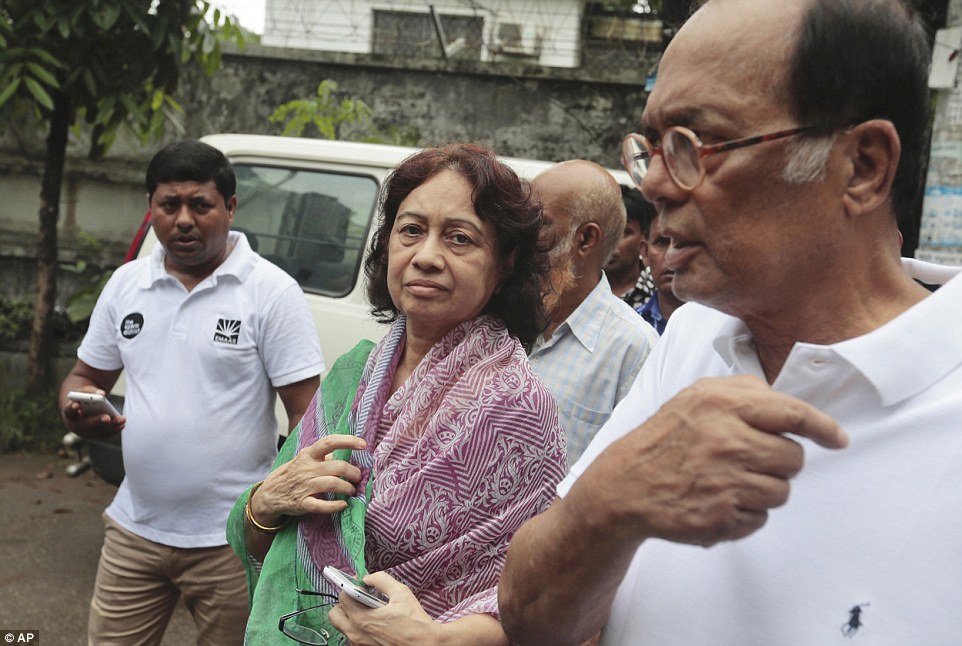 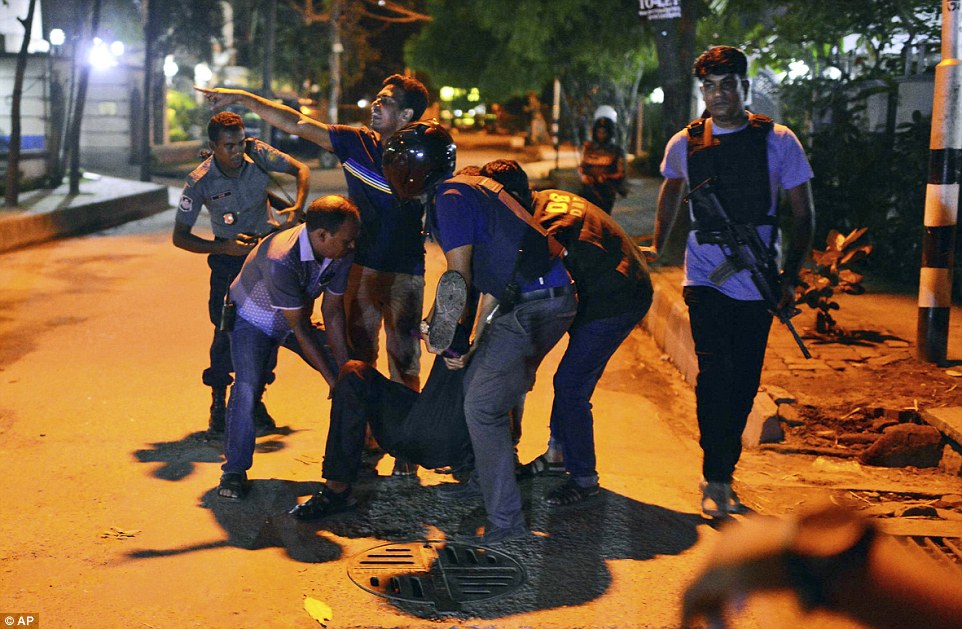 Police have stormed a restaurant after being locked in a shoot-out with gunmen at a restaurant in the diplomatic quarter of the Bangladeshi capital of Dhaka, that is popular with foreigners 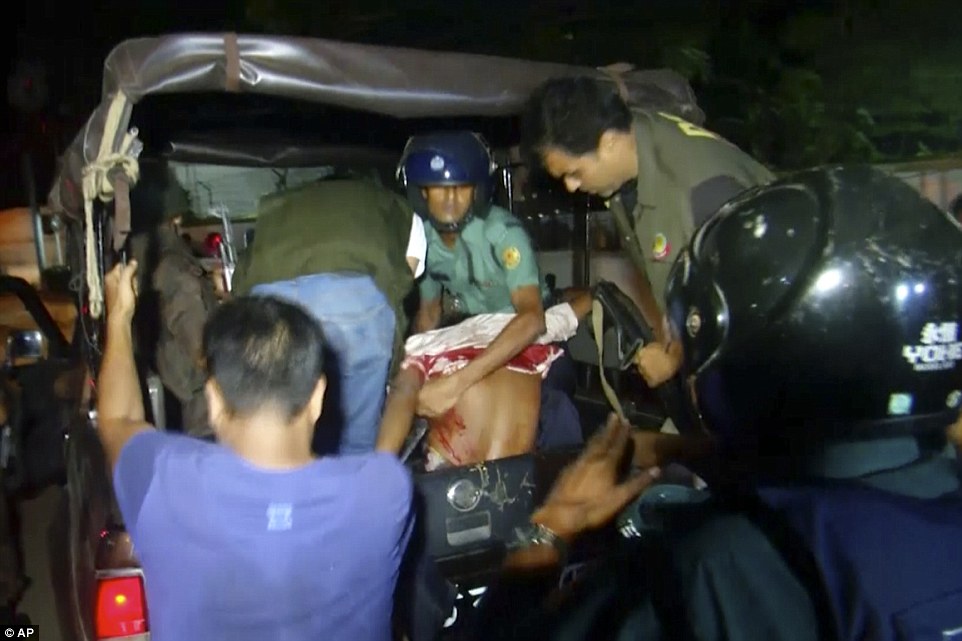 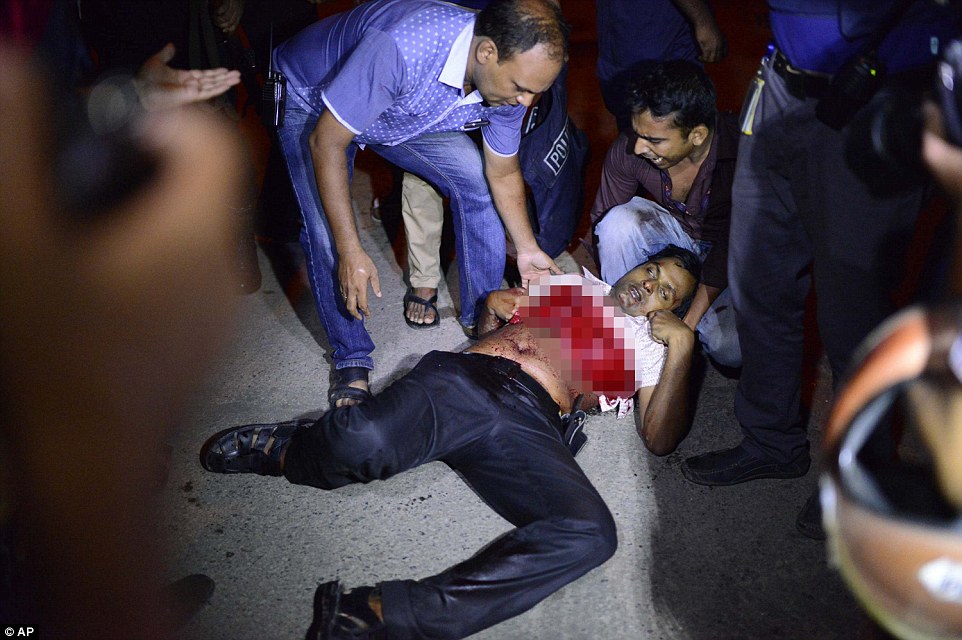 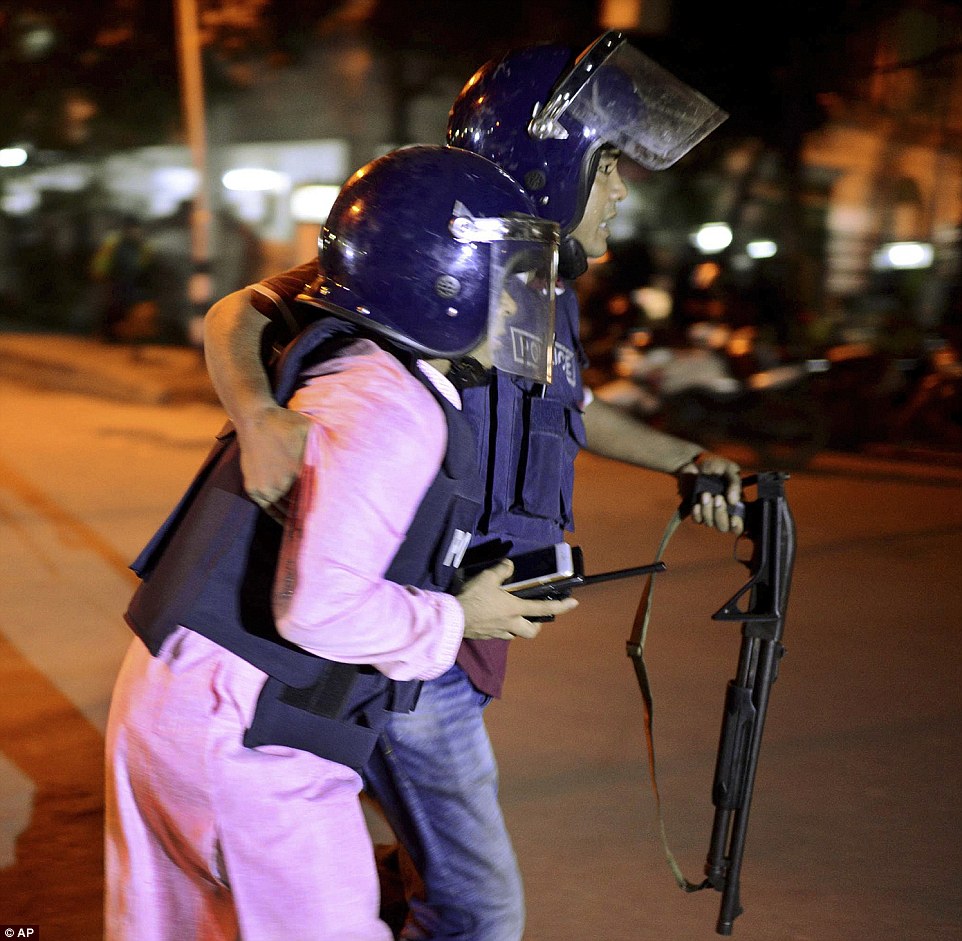 A staff member who managed to escape said the gunmen shouted ‘Allahu Akbar’ as they attacked the restaurant, shooting and throwing bombs

Speaking after the raid, Lieutenant Colonel Tuhin Mohammed Masud, commander of the Rapid Action Battalion said: ‘We have gunned down at least six terrorists and the main building is cleared but the operation is still going on.’

A Japanese government spokesman said that a Japanese hostage was rescued with a gunshot wound but seven others are unaccounted for.

Deputy Chief Cabinet Secretary Koichi Hagiuda said that the eight were together at the restaurant at the time of the attack.

One member of staff from the restaurant who managed to escape, Sumon Reza, told Bangladeshi newspaper The Daily Star: ‘They blasted several crude bombs, causing wide-scale panic among everyone. I managed to flee during this confusion.’

He added: ‘They came armed with pistols, swords and bombs. They shouted Allahu Akbar [God is great] before blasting the bombs.’

ISIS claimed 24 people had been killed and a further 40 were wounded in the attack. Images of the carnage were distributed on social media channels with links to the jihadi terror organisation.

Bangladeshi officials have said 20 have died with a number of others in a critical condition in hospital.

Hospital staff dealing with casualties said of the 26 people they are currently treating, ten are in a critical condition with six on life support. 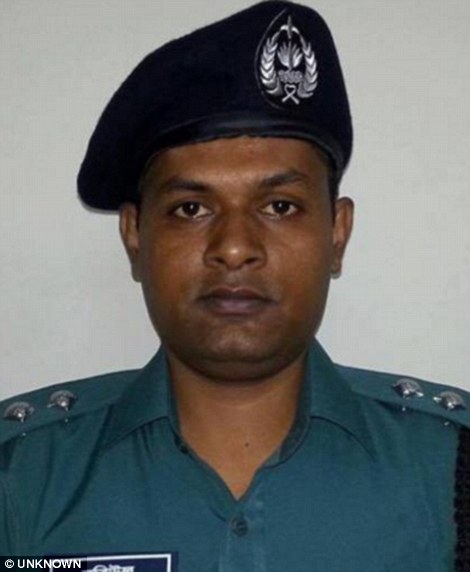 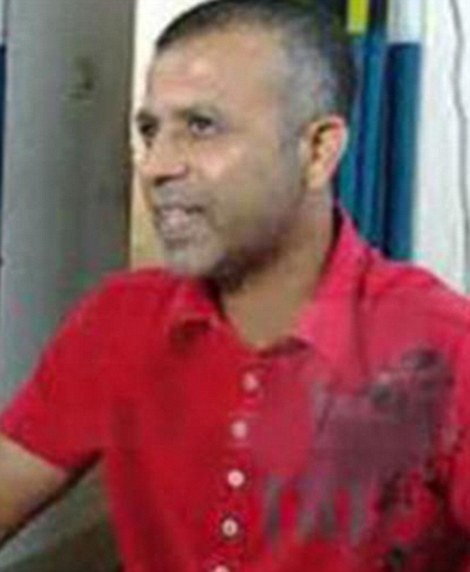 Victims: Police officers Mohammed Salahuddin (right) and Robiul Islam (left) have been named as the two reported fatalities in the hostage situation in Dhaka, according to local news site The Daily Star 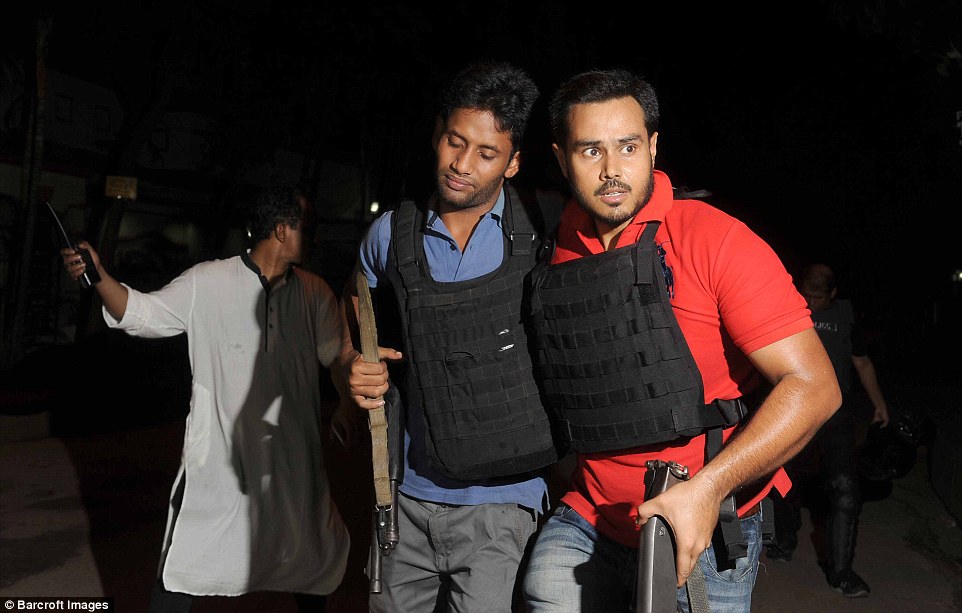 A police officer assists an injured colleague outside the Holey Artisan Bakery cafe, currently under a hostage siege by armed gunmen 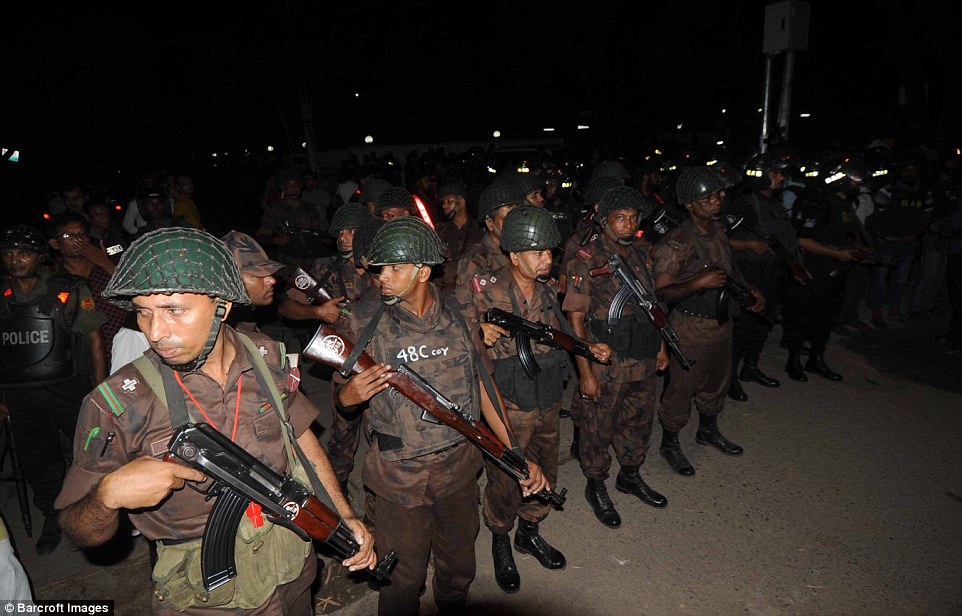 Two police officers injured earlier in the shoot-out have been confirmed dead, according to local media reports