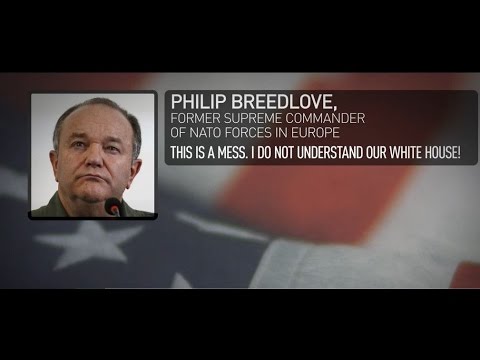 There is no question that the United States has been dangerously rattling the saber in Russia’s direction. From deploying battleships off their coast, to conducting record-breaking war games in the region, there is no doubt — the US is painting Russia as an enemy.

Now, however, we have even more glaring proof of the U.S. government’s intentions. Hacked private emails of the US general formerly in charge of NATO show a deliberate attempt to provoke conflict with Russia.

The emails, posted by the site DCLeaks, show correspondence between General Philip M. Breedlove, former head of the US European Command and supreme commander of NATO forces, with several establishment insiders concerning the situation in Ukraine following the February 2014 coup that ousted the elected government in favor of a US-backed regime, according to reports.

The emails expose Breedlove’s frequent communication with General Wesley Clark, as well as former Secretary of State Colin Powell, and involving a senior fellow at the Atlantic Council, State Department official Victoria Nuland, and US Ambassador to Ukraine Geoffrey Pyatt.

The communications are nothing short of Breedlove seeking advice on how to essentially start World War III.

Below is an example of one of the emails. “I seek your counsel on two fronts,…. how to frame this opportunity in a time where all eyes are on ISIL all the time,… and two,… how to work this personally with the POTUS,” Breedlove wrote to Powell in September 2014.

“I think POTUS sees us as a threat that must be minimized, … ie do not get me into a war????” Breedlove wrote in an email to Harlan Ullman, senior adviser to the Atlantic Council, describing his ongoing attempt to get Powell to help him influence Obama.

“Given Obama’s instruction to you not to start a war, this may be a tough sell,” Ullman replied a few months later, in another string of emails about Breedlove’s effort to “leverage, cajole, convince or coerce the U.S. to react” to Russia, as reported by the Intercept.

According to the Intercept:

Breedlove did not respond to a request for comment. He stepped down from his NATO leadership position in May and retired from service on Friday, July 1. Breedlove was a four-star Air Force general and served as the 17th Supreme Allied Commander of NATO forces in Europe starting on May 10, 2013.

Phillip Karber, an academic who corresponded regularly with Breedlove — providing him with advice and intelligence on the Ukrainian crisis — verified the authenticity of several of the emails in the leaked cache. He also told The Intercept that Breedlove confirmed to him that the general’s Gmail account was hacked and that the incident had been reported to the government.

“The last conversation I had about it with General Breedlove, he said, ‘Yeah, I’ve been hacked several times,’” said Karber. He added that he noticed at least one of his personal emails appearing online from the leak before we had contacted him. “I turned this over to the U.S. government and asked them to investigate. No one has given me any answer.”

“I have no idea whose account was leaked or hacked,” said Powell, when reached for comment about the emails. Powell said he had no comment about the discussions regarding Obama’s response to the conflict in Ukraine.

In the European press, Breedlove has been portrayed as a hawkish figure known for leaning on allied nations to ditch diplomacy and to adopt a more confrontational role again Russian-backed separatists in Ukraine. Breedlove, testifying before Congress earlier in February of this year, called Russia “a long-term existential threat to the United States and to our European allies.”

Der Spiegel reported that Breedlove “stunned” German leaders with a surprise announcement in 2015 claiming that pro-Russian separatists had “upped the ante” in eastern Ukraine with “well over a thousand combat vehicles, Russian combat forces, some of the most sophisticated air defense, battalions of artillery” sent to Donbass, a center of the conflict.

The Russians referred to last month as the “summer of provocation,” and called the NATO war games a move to reignite the Cold War intended to force Moscow to starve its domestic economy to ramp up its military to meet a growing external threat.

Russia is not alone in their assertion either as the Intercept pointed out. German Foreign Minister Frank-Walter Steinmeier told Bild am Sonntag newspaper this week that these ostensible ‘war games’ are little more than warmongering.

“What we shouldn’t do now is inflame the situation further through saber-rattling and warmongering,” Mr Steinmeier said in an interview to be published in Germany’s Bild am Sontag newspaper.

“Whoever believes that a symbolic tank parade on the alliance’s eastern border will bring security is mistaken,” Steinmeier said ahead of the upcoming NATO summit in Warsaw beginning July 8. “We are well-advised to not create pretexts to renew an old confrontation,” he emphasized.

Rather than risk inflaming the already-volatile situation further “through saber-rattling and warmongering,” there needs to be more dialogue and cooperation with Moscow, Steinmeier said.

It would be “fatal to now narrow the focus to the military, and seek a remedy solely through a policy of deterrence,” German FM said, calling to give way to diplomacy instead of military posturing.

The alliance should also consider the possibility to “renew discussions about the benefits of disarmament and arms control for security in Europe,” he said.

In spite of NATO spokesperson Oana Lungescu saying the alliance’s actions are “defensive, proportionate, and in line with our international commitments,” Russia has done absolutely nothing to provoke such a response.

The real intent behind this saber rattling is expanding military spending and bolstering the U.S. war machine. Retired U.S. Air Force Lt. Colonel Karen Kwiatkowski recently offered pertinent insight as to why Russia continues to be so vilified by the Pentagon and American media alike:

“The Pentagon needs and wants Russia to be the next big enemy that they are arming against it, budgeting against it, that they are targeting. Certainly, we have talked for a long time about China and China plays an important role as the enemy of choice for the U.S. military. But Russia is ideal in part, because we don’t import a lot of things from Russia, in part because we don’t have the debt relationship with Russia that we do with China. So, Russia makes for a very convenient enemy for the Pentagon in terms of its mission, its budgeting, and its intelligence organization.”

“The Pentagon needs that kind of enemy,” Kwiatkowski continued. “And [U.S. Secretary of Defense] Ashton Carter, if you listen to what he says continually — even from the beginning of time he was put in office — his job is fundraising, just like the university president’s job is not education but rather fundraising. Ashton Carter’s job is also fundraising, and he fundraises through this process of identifying, pushing, and delivering up an enemy that will justify their budgets.”

Prior to the German FM speaking out about this overt saber rattling, the only ones defending the Russians — were the Russians. Now that a U.S. ally is applying sensible logic to the scenario, the antagonistic intentions of the military-industrial complex are laid bare.

Unfortunately, the U.S., in its flagrant and irresponsible creation of the world’s largest military, cares not about starting actual world wars in their attempts to enrich their corporate masters. These hacked emails only add credence to this notion.

When the chickens come home to roost, however, the result of such belligerent foreign policy will be death and destruction — on a massive scale.