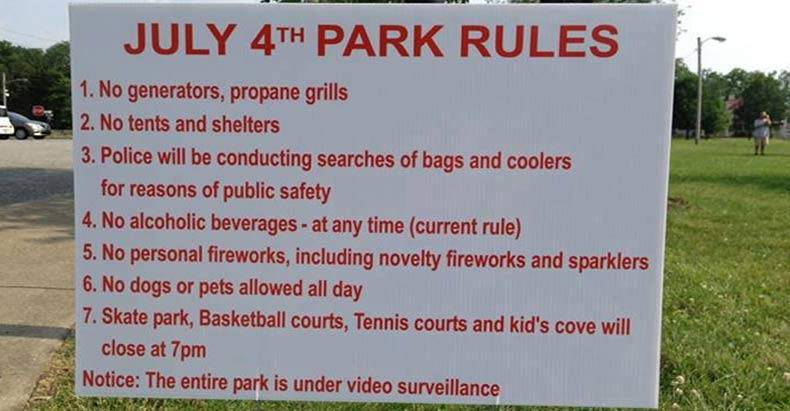 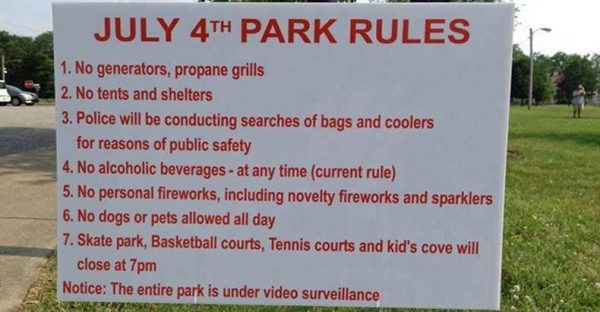 As Americans don their red, white and blue sequence bar-b-que aprons and raise their flags, ironically made in China, in an effort to “celebrate their freedom,” we should be asking ourselves this 4th of July — what freedoms do Americans really have?

We are under constant surveillance, with our every move under a microscope by government goons “protecting us” from “terrorists.”

We are under the constant threat of violence from the state for possessing a plant, or having a tail light out, or simply walking down the street.

Americans are constantly paranoid of those blue and red lights popping up in the rearview mirror that most always end in extortion and could very well end with a visit to the hospital, being locked in a cage, or worse.

In the Land of the Free, police killed more people in just one month of this year than the United Kingdom has in the entire 20th century.

In the Land of the Free, police kill at more than 70 times the rate of other first world nations.

In the Land of the Free, we are told to “fear the terrorists” but US police kill 58 times more people than all terrorist activity against US civilians since 9-11!

State sanctioned deprivation of rights, liberty, and life — is this what we call “Freedom” these days? The exact opposite of what the founders meant when they signed the Declaration of Independence?

Sadly, when people do begin to question this paradigm of violence against the citizens and the usurping of freedom, blame is quickly associated and directed toward whichever corporate puppet is in charge, then they just go back to sleep — resolute in the notion that they can vote those bastards out and it will all be fixed.

Boobus Americanus then slips back into la la land, cheering on the police state as if they are fans on a football stadium sideline. “My team is winning! USA! USA! USA!”

But your team is not winning, Boobus!

Just for a moment, can we stop chanting that “USA is number one”?

Can we remove the patriotic blinders for a moment and take a look at the categories in which we are actually number one? Because it’s certainly not freedom.

According to the 2014 Legatum Prosperity Index released in November, in the measure of personal freedom, the United States has fallen from 9th place in 2010 to 21st worldwide—behind such countries as Canada, the United Kingdom, Germany, Uruguay and Costa Rica.

Other such rankings systems show the US as low as 46. Yet somehow, Americans still believe their leaders when they say that terrorists “hate our freedom,” as if the ‘terrorists’ took down the first 45 freest countries and are just now getting to us!

No, we are most assuredly not number one in freedom.

But, we are however number 1 in,

The job of law enforcement in America today is enforcing every arbitrary edict in the land to maximize profits for just a few private prison companies who are paid with stolen money (taxes). Because order followers don’t question any of their orders, it has led to 65 million Americans (about 22% of the population) having criminal records.

Many of these criminal records are because of simple drug possession. An individual with a criminal history finds it extremely difficult to find a job or a place to live. People become desperate for life’s necessities so they resort to violent crime and will get a job on the black market selling drugs, which will lead to more time in jail.

This vicious cycle has become a phenomenon known only as recidivism.

Of all the major industrialized nations, America is the most obese. Mexico is #2.

The United States has the highest child abuse death rate in the world. Many of these deaths happen in state-approved foster homes after children are ripped from their parents’ arms because their parent took part in some arbitrary victimless crime, like smoking marijuana.

Hours spent in front of the Television:

Nobody watches more television per week (28 hours) than Americans do. Americans are far better at keeping up with the Kardashians than they are about putting an end to government corruption.

The US leads the world by a wide margin in teen pregnancies. This is in spite of public schools offering vaginal implants for birth control to 11-year-old girls without their parents’ permission.

Americans are not even close to being in the top 10 healthiest countries in the world, despite consuming far more prescription drugs than the rest of the world.

In Canada, the total number of citizens killed by law enforcement officers in the year 2015 was 23; that is 52 more people than the US.

If we look at the United Kingdom, police killed 3 people in 2015, one person in 2014, and 0 in 2013. English police reportedly fired guns a total of three times in all of 2013, with zero reported fatalities.

China, whose population is 4 and 1/2 times the size of the United States, recorded 4 killings by law enforcement officers in 2015. Police in America killed 302 times more people than China!

The United States has accumulated the biggest mountain of government debt in the history of the world.

According to nationmaster.com, the United States has the most total reported crimes in the world, by a long shot.

How ironic is it that the Land of the Free has the most laws on the entire planet?

Attorney Harvey Silverglate argues that the average American commits three felonies a day without even knowing it. Although it has been estimated that there are over 3,000 types of federal criminal offenses, no one knows the exact number for sure.

At any given time, a police officer could walk up to you and find you in violation of some arbitrary law. It is a mathematical certainty.

So, next time your chest begins to fill with patriotic puff, stop for a second and realize that Americans are number one, but in such a bad way.

In the meantime, however, we still have the freedom in this country to inform ourselves and others. Only through a lesser ignorance will these horrid tyrannical traits subside.

Humanity is involved in a struggle, as we have always been, but there are much more of us now. Inciting peaceful change has never been more important. However, so many well-meaning individuals go about inciting this change with blunt force. This has to change.

If you truly want to make the world a more peaceful place, you have to become a more peaceful person. Petty infighting, personal attacks, vitriol, and hate are the tools of tyrants and also of those who only claim to be awake.

Next time you’re cringing in a public setting, listening to Joe Six Pack spout off NFL stats like an ESPN commentator, wait for an opportune time and plant a seed.

“Hey Joe, speaking of the Kansas City Chiefs, what do you think of wide receiver, Dwayne Bowe and his arrest for having weed? Do you think its cool that he was deprived of his freedom for having a plant? How can we legitimately call this country the land of the free when that can happen to someone?”

Be the change that you want to see in this world.