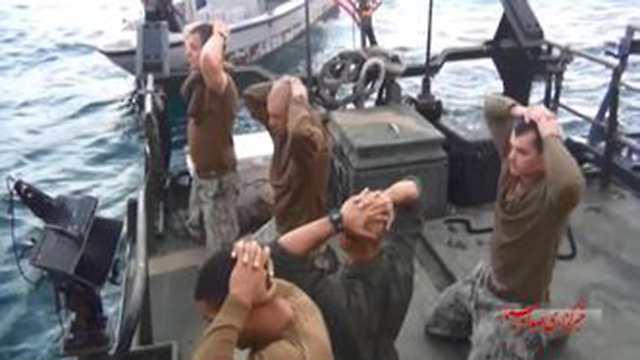 Shameful and treasonous. This is the low level to which the Navy, and the US military in general, has sunk during the Obama years. We no longer stand and fight. Instead, we surrender in order to protect a deal that makes massive concessions to a genocidal rogue state.

The Navy commander in charge of a pair of patrol boats captured by Iranian forces in January opted to surrender rather than fight back, citing later fears that a confrontation could endanger the Obama administration’s efforts to lock in a deal with Tehran on its nuclear program.

In an interview with investigators looking into the January incident, the commander said he surrendered the vessels after calculating that his sailors would not be in danger because Iran “wants this nuke deal to go through.”

The interview was one of several stunning revelations in the often scathing 170-page report compiled by Navy investigators, chronicling the chain of events that led to the apprehension and detention of the 10 American sailors by the Iranian military after a pair of U.S. patrol boats drifted into the country’s sovereign waters in the Persian Gulf….

Nine Navy officers have been fired for their involvement in the incident, in which the two Navy patrol boats, running late on their assigned mission, drifted into the costal waters near Farsi Island, home to an Iranian naval base.

Heavily outgunned and outnumbered by members of Iran’s Revolutionary Guard Corps, the Navy commander — whose name was redacted from the report — told investigators he calculated that Tehran’s desire to keep the nuclear deal with the U.S. alive would also protect the 10 American sailors if they surrendered.

Mr. Obama, the unidentified commander said, would not want me to start a war over a mistake, over a misunderstanding.”

The partially redacted report was also critical of the behavior of the U.S. sailors once in Iranian custody.

One sailor reportedly made “statements adverse to U.S. interests” during interrogation. As the Iranians videotaped their captives for later display on state television, another sailor encouraged the U.S. crew members to accept food offered to them.

One unidentified sailor was said to have violated the code of conduct standards when he “acquiesced” in making an Iranian-scripted statement on camera in exchange for the crew’s release.

“It was a mistake that was our fault and we apologize for our mistake,” a U.S. sailor, identified as the commander of one of the patrol boats, said during the videotaped apology. “It was a misunderstanding. We did not mean to go into Iranian territorial water. The Iranian behavior was fantastic while we were here. We thank you very much for your hospitality and your assistance.”…