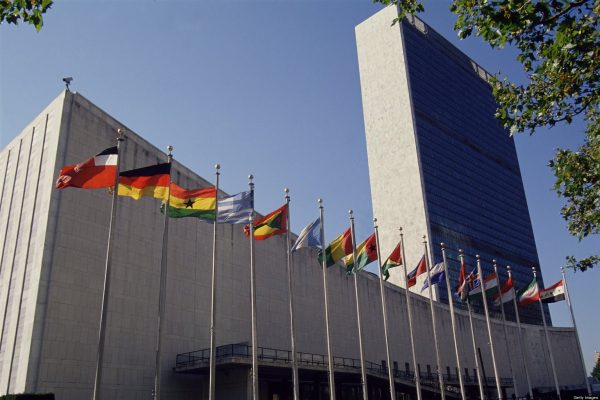 There have been rumors going around concerning the arrival of U.N. troops at U.S. military bases. Conspiracy theories abound which suggests peacekeeping troops will be used to confiscate weapons from American citizens in the final stage to merge the U.S. into a globalist world order headed by the United Nations. People who espouse these views are immediately discredited as “tinfoil hat” wearers and conspiracy kooks by people that believe something like that could never happen here. The evidence however is overwhelming when considering how deeply entangled the U.S. has become in United Nations affairs. For instance, Loretta Lynch and Barack Obama have initiated a program called the Strong Cities Network, which is the product of a U.N. think tank called the Institute for Strategic Dialogue. The purpose of the Strong Cities Network is to combat home grown extremism while giving the U.N. law enforcement capabilities over our cities. While many would think this makes sense in the age of terror, this author has described many times who this administration, and the U.N. indecently, considers being the extremists. Another example is the numerous treaties proposed by the U.N. which would surrender U.S. sovereignty to a world governing body; an example is the Arms Trade Treaty.

Is the United States losing its sovereignty to a world governing body? Sadly, the answer to that question is yes and it is a process that started many years ago with something called The United Nations Participation Act which was signed into law on December 20, 1945.

This law committed the United States to full participation in the U.N. while authorizing the president to appoint representatives and commit the United States military to conflicts based on U.N. objectives. To be more specific, congress would retain the power to determine the size and terms of military deployments but the power to determine what would constitute the type of crisis warranting their use would be solely up to the United Nations Security Council. That is a huge loss of American sovereignty in and of itself because the power to wage war, according to the U.S. Constitution, rests with the United States Congress alone. It was because of the provisions of this law that President Truman was able to commit troops to the Korean War without the consent of congress and instead, the vote of the U.N. Security Council on the pretext of an international emergency. The same could be said for many of the wars and police actions that would soon follow.

Another area of concern is the United Nations insistence that the United States fully comply with what has become known as Agenda 21, or the sustainable development agenda. This is the agenda based on the idea that United States, and capitalism in general, is responsible for global warming and in order to save the planet our sovereignty must be surrendered and our wealth redistributed to third world countries. According to climate justice activists the United States owes the world a climate debt because of our excessive use of fossil fuels. The U.S. commitment to the so called “climate change” problem is the result of another law passed by congress committing us to United Nations objectives. This law was called the United Nations Environmental Program Participation Act of 1973. This act, Public Law 93-188 made it U.S. policy to contribute funds to the United Nations in a “coordinated international” effort to protect and improve the environment. The Obama administration is working feverishly to implement the climate change agenda by reducing our reliance on fossil fuels on the pretense that they are destroying the environment. The U.N. climate chief, Christine Figueres, has publicly stated that all efforts should be made to reduce the human population in order to save the planet from climate change and that a global communist regime would be the best form of government to do so. According to Public Law 93-188, our government is providing the funds necessary to this effort.

Finally, an act passed by our congress concerning the United Nations that should have all Americans concerned because it deals with the very heart of the liberties we hold dear is the Arms Control and Disarmament Act of 1961, or Public Law 87-297. This law calls for the complete disarming of the U.S. military as a sovereign force and the merging of our troops into a global, U.N. peacekeeping force. The basic premise of this law is to give all policing and military powers to an international force governed by the United Nations.

The over-all goal of the United States is a free, secure, and peaceful world of independent states adhering to common standards of justice and international conduct and subjecting the use of force to the rule of law; a world which has achieved general and complete disarmament under effective international control; and a world in which adjustment to change takes place in accordance with the principles of the United Nations.
In order to make possible the achievement of that goal, the program sets forth the following specific objectives toward which nations should direct their efforts:
The disbanding of all national armed forces and the prohibition of their reestablishment in any form whatsoever other than those required to preserve internal order and for contributions to a United Nations Peace Force;
The elimination from national arsenals of all armaments, including all weapons of mass destruction and the means for their delivery, other than those required for a United Nations Peace Force and for maintaining internal order;
The institution of effective means for the enforcement of international agreements, and for the maintenance of peace in accordance with the principles of the United Nations;
The establishment and effective operation of an International Disarmament Organization within the framework of the United Nations to insure compliance at all times with all disarmament obligations.

Our armed forces have been reduced considerably over the past several decades and under President Obama, this process has accelerated. The U.N. Arms Trade Treaty seeks to strengthen this law by giving the U.N. jurisdiction over all arms, including those in the hands of U.S. civilians. Many believe that this treaty wouldn’t affect the rights of U.S. gun owners; however, with a U.S. military diminished in size and scope and an international army being funded by our own government through established law, not to mention the haphazard manner in which our lawmakers ignore our constitution, there is little to prevent the disarming of U.S. citizens at the hands of the United Nations. There are provisions of the Arms Trade Treaty that suggest lawful legitimate use of firearms would be protected; however, self defense and the right to over throw tyrannical governments are not considered human rights by U.N. bureaucrats.

In 2015 Congressman Mike Rogers introduced legislation to get the U.S. out of the United Nations. The bill, titled the American Sovereignty Restoration Act of 2015 has once again been introduced to congress after the recent Brexit vote. The question of whether or not a move like this is even possible, considering the laws that have been passed committing us to U.N. objectives is indeed a tough one to answer. Our congress is currently made of people sold out to global government issues and they have recently demonstrated a willingness to surrender the liberties of their constituents by allowing votes on gun control and staging a sit-in demanding security in exchange for liberty. Are they just playing a role to further the goals set by U.N. bureaucrats and global government advocates decades ago? The answer to that question is probably yes. If the U.S. is to retain its sovereignty it is imperative that we exit the U.N. and repeal all laws that give them any power over U.S. law immediately. Or else we may just find U.N. troops policing our streets one day.

Posted with permission from In Defense of Our Nation