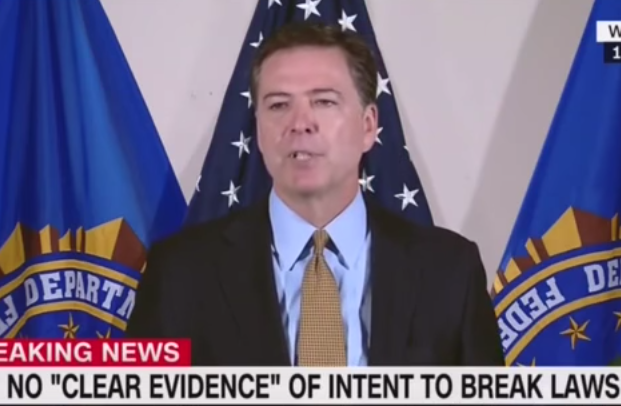 The criminal “just us” system continues to work superbly for untouchables at the top like Hillary Clinton.

The FBI has officially determined that no charges will be handed down in Hillary’s State Dept. email server scandal because… “she had no intent to harm”.

In point of fact, as it has been pointed out at length, the FBI essentially had to rewrite the law to let Hillary off:

There is no way of getting around this: According to Director James Comey (disclosure: a former colleague and longtime friend of mine), Hillary Clinton checked every box required for a felony violation of Section 793(f) of the federal penal code (Title 18): With lawful access to highly classified information she acted with gross negligence in removing and causing it to be removed it from its proper place of custody, and she transmitted it and caused it to be transmitted to others not authorized to have it, in patent violation of her trust. Director Comey even conceded that former Secretary Clinton was “extremely careless” and strongly suggested that her recklessness very likely led to communications (her own and those she corresponded with) being intercepted by foreign intelligence services…

In essence, in order to give Mrs. Clinton a pass, the FBI rewrote the statute, inserting an intent element that Congress did not require. The added intent element, moreover, makes no sense: The point of having a statute that criminalizes gross negligence is to underscore that government officials have a special obligation to safeguard national defense secrets; when they fail to carry out that obligation due to gross negligence, they are guilty of serious wrongdoing. The lack of intent to harm our country is irrelevant. People never intend the bad things that happen due to gross negligence. I would point out, moreover, that there are other statutes that criminalize unlawfully removing and transmitting highly classified information with intent to harm the United States. Being not guilty (and, indeed, not even accused) of Offense B does not absolve a person of guilt on Offense A, which she has committed.

And, as it has also has been pointed out, other people have been charged by the FBI for a similar offense specifically without malicious intent.

Not only has the system perfectly illustrated that the rule of law is dead, but the people have been clearly shown that the presidential candidate being shoved down America’s throats by the elite is, without a doubt, above the law entirely.

Watch FBI Director Comey talk about how “honestly” this investigation was done below.