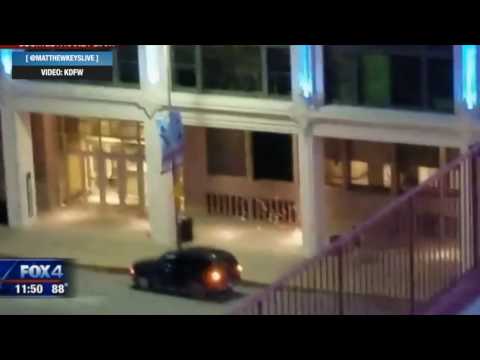 Dallas, Texas – In the above video, aired on CNN, a Dallas area law enforcement officer is seen being shot to death by an assailant at point blank range. The officer and suspect exchange gun fire as incendiary type explosions of unknown origin can be seen going off around them.

(Editor’s note: This article was posted at 3:00 AM Central on Friday Morning)

The would be assassin and officer can be seen squaring off as they fire at one another from behind the pillars of the building. The cop killer quickly rushes the officers position as bullets ricochet off the stone building. The officer attempted to guess which direction the killer would approach and was fatally overcome as the assailant ambushed him; cutting him down in a hail of bullets.

Eleven Dallas law enforcement officers were shot in the downtown Dallas attack, with five being fatally wounded, on Thursday by what police believe to be multiple shooters who opened fire during a downtown protest over the recent police killings in Minnesota and Louisiana, according to Dallas Police Chief David Brown.

Reports indicate that three people are in custody for the Dallas police massacre, while a a fourth person is currently exchanging gunfire and negotiating with Dallas police officers at the El Centro Garage according to Dallas Chief Brown’s statement in a <a< span=””> href=”https://twitter.com/DallasPD/status/751287925040525312″>Periscope video.

One suspect was in a shootout with Dallas SWAT and was ultimately taken into custody, with a “suspicious package” found in the vicinity of the suspects location, according to the Dallas Police.

According to Brown, at least two snipers attacked from elevated positions on police officers just minutes before 9 p.m. CT. Below is video capturing officers being shot and pinned down by sniper fire.

“We believe that these suspects were positioning themselves in a way to triangulate on these officers from two different perches in garages in the downtown area, and planned to injure and kill as many law enforcement officers as they could,” Brown said at a news conference — noting a number of officers were shot from behind.

Reports indicate that three people are in custody for the Dallas police massacre, while a a fourth person is currently exchanging gunfire and negotiating with Dallas police officers at the El Centro Garage according to Dallas Chief Brown’s statement in a Periscope video.

Chief Brown went on to state that police believe the suspects may have threatened to have plant a bomb in the downtown area, and were in contact with the FBI and federal Bureau of Alcohol, Tobacco, Firearms and Explosives, according to NBC News.

Meanwhile, a massive police presence has surrounded a vehicle and are questioning two individuals they took into custody on Interstate 35 at Ann Arbor Avenue in Dallas, according to WFAA-8. According to Dallas police, that situation began when a Dallas police officer saw an individual carrying a camouflage bag walking quickly down Lamar Street. The individual threw the bag into black Mercedes, when then sped off at a high rate of speed.

Officers followed the vehicle southbound on I-35 and stopped it on I-35 at Kiest. Police are questioning both occupants of the vehicle.

Thus far the body count of Dallas police officers killed in this brazen attack stands at four, with varying reports of either eleven or twelve officers having been shot in total.

Nearly 1000 people attended the peaceful demonstration, with close to 100 police officers were assigned to the event and the surrounding area, Dallas Mayor Mike Rawlings said.

The shooting began after the demonstration had finished and a march was taking place.

According to a report by CNN:

Dallas police are negotiating with a suspect at a parking garage in downtown Dallas, Chief David Brown said. Police have been exchanging gunfire with the suspect for 45 minutes.
“The suspect has told our negotiators that the end is coming,” Brown said.
The suspect said more officers are going to be hurt, and added that there are bombs placed in downtown Dallas.