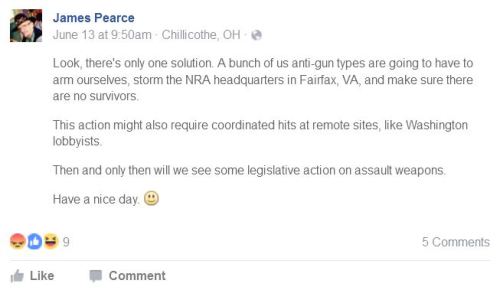 An important mark of sanity is that one must conform to the rules of logic.

Liberals, however, are creatures of illogic and are prone to logical fallacies. As an example, this blog, Fellowship of the Minds, regularly gets comments by liberal trolls scolding us for being “judgmental” and lecturing us to “judge not”. But it escapes them that in scolding us for being “judgmental,” liberals are being just that — “judgmental” — and so violate their own injunction to “judge not”.

The latest example of liberal illogic is an adjunct assistant professor of philosophy at a community college in Ohio who is anti-gun and pro-gun control.

Note: Being an “adjunct” means one is not tenured, nor even on tenure-track, but teaches part-time and can be terminated at any time

On June 13, 2016, Adjunct Assistant Professor James Pearce of Southern State Community College (SSCC) wrote on Facebook, calling on “us anti-gun types…to arm ourselves, storm the NRA [National Rifle Association] headquarters”, killing everyone so as to “make sure there are no survivors”. Here’s a screenshot of his Facebook post:

In other words, a professor who is pro-gun control wants to use guns to kill everyone at the NRA.

The Highland County Press reported that Pearce’s comments were sent to law enforcement and Pearce’s employer, SSCC, on June 15.

On June 17, SSCC Security and Emergency Response coordinator Gary Heaton told the Highland County Press that the information had been reported to the FBI and the Department of Homeland Security, and that “The Attorney General advised [SSCC Vice President] Dr. Roades to take no action until the Feds had completed an investigation.”

It was only after Amber Athey, on July 6, 2016, reported Pearce’s call to murder for Campus Reform that Pearce lamely wrote on Facebook that “It was suppose [sic] to be a joke, folks” and issued an apology. Here’s a screenshot of his post:

Kris Cross, Director of Public Relations for SSCC, told Campus Reform that “it is the college’s policy not to comment on individual personnel matters,” but did offer some general observations of potential relevance to the case:

“In general, the college would alert local authorities about any threats that were made known to the college, especially any threats made to students, faculty or staff. We have a good working relationship with the police jurisdictions covering each of our four campuses, and trust they would follow their protocols for reporting to other agencies. As I understand it, a report does not necessarily mean an investigation.”

When asked if Pearce would continue to teach during the investigation, Cross stated, “Certainly any criminal prosecution and findings could be a consideration for employment decisions in any matter of criminal conduct.”

Pearce’s demotion is not surprising given the fact that although he teaches philosophy, he does not appear to grasp what “logic” means and what being logically consistent entails.