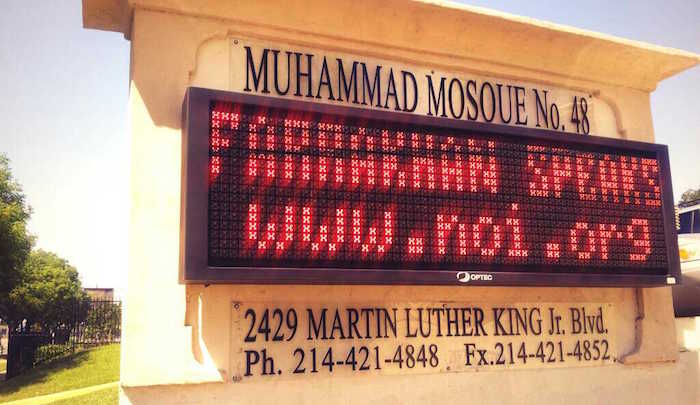 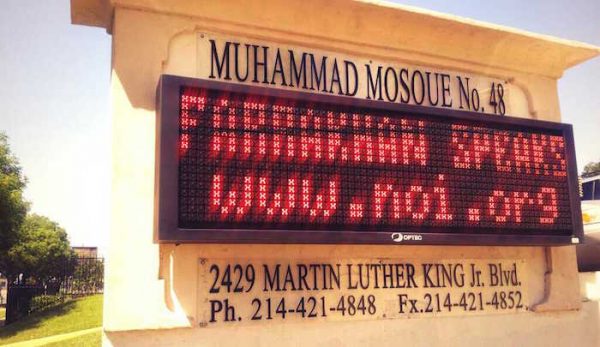 American terror-tied groups like Hamas-CAIR support and agitate for the Black Lives Matter movement. A Black Lives Matter activist distributed flyers on “proper riot gear” in both English and Arabic (but not Spanish, French, Russian, etc).

It’s ironic, of course, because  blacks (abeed in Arabic, meaning slave) are held as slaves in Muslim countries (i.e. 20% of the population of Mauritania are blacks enslaved by Muslims.)

Read through these series of links.

The Hamas-linked Council on American-Islamic Relations (CAIR) and other Islamic supremacist groups have assiduously courted Black Lives Matter, and linked their propaganda efforts against “Islamophobia” to the Black Lives Matter stand against perceived racism. In Dallas last night, we see where this is tending: as Kyle Shideler notes in the March article below, “At the event, MAS leader Khalilah Sabra openly discussed the importance of Muslim support for Black Lives Matter, and urged ‘revolution.’ Comparing the situation in the United States to the Muslim Brotherhood-led Arab Spring revolutions, she asked, ‘We are the community that staged a revolution across the world; if we can do that, why can’t we have that revolution in America?’” And with the mass murder of police in Dallas last night, we’re getting there.

The Nation of Islam is not an orthodox Muslim group, and subscribes to a great deal of racial mythology that is nowhere in Islamic tradition. It is, however, also true that many black Americans first enter the Nation, and then become orthodox Sunni Muslims. And given the increased racial tensions of the Obama era, many people in both the NOI and among mainstream Sunnis have a taste for the “revolution” that is brought about by means of jihad.

Heavily armed snipers killed five police and transit officers in downtown Dallas and wounded seven more, in a ­premeditated and triangulated “ambush-style” assault during a rally protesting against the killing of black men after two shootings this week….

As the FBI and local authorities launched an investigation, their focus was expected to probe militant black rights groups set up in Dallas. Anti-police groups include the New Black Panther Party and Huey P. Newton Gun Club, named after the founder of the 1960s activist Black Panther Party.

The Huey P. Newton Gun Club includes a coalition of BARC (Blacks Against Racist Cops) and other African-American groups, who agitate against police ­brutality. The group ­attended the Nation of Islam’s Muhammad mosque in Dallas in April to monitor protests by an anti-­Islamic group, the ­Bureau of American ­Islamic Relations. Both sides were armed, and moved on by police….

It’s useful to recall this: “Black Lives Matter and a History of Islamist Outreach to African Americans,” by Kyle Shideler, Townhall, March 17, 2016:

Once the dust settled, last week’s protest of a Donald Trump rally in Chicago demonstrated a growing nexus between Islamist groups in the United States and the radical leftist “Black Lives Matter” movement.

This rhetoric of unity between these movements was clearly on display at the 2015 joint conference of the 2015 Muslim American Society (MAS) and the Islamic Circle of North America (ICNA). MAS was described by federal prosecutors as the “overt arm” of the U.S. Muslim Brotherhood, and ICNA is recognized as the front for the Pakistani Islamist group Jamaat-e-Islami (JeI) founded by one of the foremost thinkers on modern Jihad, Syed Abul A’la Maududi.

At the event, MAS leader Khalilah Sabra openly discussed the importance of Muslim support for Black Lives Matter, and urged “revolution.” Comparing the situation in the United States to the Muslim Brotherhood-led Arab Spring revolutions, she asked, “We are the community that staged a revolution across the world; if we can do that, why can’t we have that revolution in America?”

Reporting on this merging “revolutionary” alliance goes back as far as the first outbreak of disorder in Ferguson. Few may recall the attendance at Michael Brown’s funeral of CAIR executive director Nihad Awad. Awad was identified in federal court as a member of the Palestine Committee, a covert group of Muslim Brothers dedicated to supporting Hamas in the United States.

CAIR joined other groups named by federal law enforcement as Muslim Brotherhood organizations and lined up behind the Ferguson protests.

In November of 2014, Fox News reported on an effort by CAIR Michigan Director Dawud Walid to link the death of Michael Brown at the hands of police and the death of Luqman Abdullah, a Detroit imam shot during an FBI raid.

Abdullah was described by the FBI as a leader of a nationwide Islamic organization known as “The Ummah,” run by convicted cop-killer Jamil Abdullah Amin. Abdullah’s group engaged in criminal activity in order to raise funds in order for an effort to establish Sharia law in opposition to the U.S. government.

Amin and CAIR have a long association together, with CAIR providing funding for Amin’s legal defense, and issuing numerous press releases in support of the Georgia radical imam and former Black Panther.

While this linkage of Islamist front groups to radical racial politics may seem a relatively new development, the reality is it has been the result of a nearly four decade long effort by Islamist groups. A major thinker on this effort was a Pakistani immigrant and ICNA leader named Shamim A. Siddiqui, who knew JeI founder Maududi personally. Siddiqui wrote his work, Methodology of Dawah Il Allah in American Perspective in 1989.

“an organized, a determined and a continuous effort to call the people of the land to the fold of their Creator and Sustainer, Allah (SWT), as priority Number One [of the Da’ee], towards accepting Islam as a way of life and convincing them to the need and urgency of establishing the Deen of Allah in the body politics of the country, with the sole objective to get the pleasure of Allah.” [Emphasis added]

In other words, Siddiqui focused not solely on religious proselytizing, but on the promotion of Islam as a political system. Siddiqui spends much of Methodology of Dawah discussing the efforts being made at recruiting and indoctrinating African Americans, and complained that the “revolutionary” aspect of Islam (his words) was being ignored by those working to convert the African American community.

“This again, will not be possible without bringing both the immigrant and Afro-American Muslim communities of America on to one platform. The resources of one and the political awakening of the other, when combined together with the Islamic Movement of America, will be able to play miracles…There will be no dearth of resources, both of men and material, at that time. Only the Islamic Movement of America can get this job accomplished.”…

Stand-off: The officer (right) sneaks up on the shooter (left, next to car) then leans out to engage him and to shoot from behind a pillar

Armored: But the killer shrugs off the attack and then sprints towards the cop’s position. A witness said the maniac had so many ammunition magazines ‘they were falling out of his pockets’

Closing in: The officer turns to his right, thinking that the killer will approach from behind a pillar

Shot: The killer then rounds the corner and fires, knocking the officer to the floor with a shot to the back

South Dallas mosque. Members of the mosque were subject to an anti-Muslim protest on April 3, 2016.

On July 7, 2016, five police officers were killed by sniper fire in Dallas, Texas. Six other officers and two civilians were wounded. The shooting occurred at a protest against police killings in the aftermath of the shooting deaths of Alton Sterling and Philando Castile. This is all generally known.

Among the five suspects now in Dallas Police custody are self described “Islamic Americans” who attended a Nation of Islam mosque in the South Dallas area. It should be noted that the Nation of Islam itself is splintered into several groups. Louis Farrakhan, who took over the organization in 1981, subscribes to Dianetics and appears to have left Islam altogether. It’s ideology is barely recognizable as Islamic.

Update, 7/8: Dallas Mayor Mike Rawlings today identified a suspect as Micah X. Johnson, a resident of Mesquite. Micah X. appears to have been named after Malcolm X., one of the founding members of the Nation of Islam. “While in prison, Malcolm X became a member of the Nation of Islam, and after his parole in 1952, quickly rose to become one of the organization’s most influential leaders.”

No American Islamic leader publicly promotes violence, and the Nation of Islam is no exception to that rule. However, members of this particular Mosque might reasonably have believed that they themselves were under attack.

A tense, armed protest in front of a South Dallas mosque required Dallas police intervention one Saturday afternoon in April. It happened in front of the Nation of Islam mosque on April 3, 2016, according to CBS Dallas.

Anti-Moslem demonstrators, dressed in fatigues and masks and most of them armed, were easily outnumbered approximately 10 to 1 by the mosque supporters, some of whom were also armed, reported CBS Dallas. http://www.cbsnews.com/news/anti-muslim-protest-in-dallas-features-fatigues-masks-lots-of-guns/

Dozens of police officers stood in between the two groups and also on rooftops to ensure nothing more than words were exchanged.

In a statement released before the April protest, the Dallas Police Department said, “The department is committed to protecting the Constitutional rights of all citizens and will make every effort to keep this protest peaceful.”

The was no violence and no arrests. But the seeds of anger and dissent were sown.

Militant Islam Reaches America is a book written by historian Daniel Pipes, published in 2002. It focuses on Islamic fundamentalism and Islamism, reflecting Pipes’ view that, as he said in 1995, “Unnoticed by most Westerners, war has been unilaterally declared on Europe and the United States.” The latest shooting in Dallas appears to have been a part of that war.

Anti moslem protest in front of the Mosque on April 3.

The protest was organized by the Next Generation Action Network after the killings of two black men, Alton Sterling and Philando Castile, by police in Louisiana and Minnesota, respectively. It was one of several protests held across the U.S. on the night of July 7. Several hundred protesters were involved in the Dallas protest, and before the shooting occurred, no other incidents were reported and the event was peaceful.

Belo Garden Park, the location where the protest began and near where the shooting occurred, was a popular gathering place for Black Lives Matter demonstrations, such as one held after the death of Sandra Bland at a Waller County, Texas, jail in 2015.

The people firing on the Dallas police used another group’s protest event, to settle what they saw as an offense against their race and their religion.