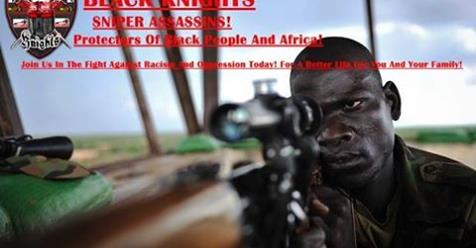 A link to one of the last cached snapshots of the now-removed Facebook page of the first group to take credit for the Dallas PD officer assassinations shares common ideologies with other Muslim terrorist groups.

“We Are A Powerful Political Group Of Patriotic, Pro Black, Pan African”

“Black Power” are also part of Black Panthers (who are mostly Muslim), and they promised that “More Will Be Assassinated In The Coming Days! Do You Like The Work Of Our Assassins? Get Your Own Sniper”

Micah Johnson, who is seen on video killing a cop, joined Facebook groups that referenced the Black Panther Party, the LA Times reported, including one called the Huey P. Newton Gun Club, named after one of the Black Panthers’ founders. Johnson liked pages relating to Elijah Mohammed, the Nation of Islam’s deceased founder. This is a militant black Muslim group. Johnson also liked the Black Riders Liberation Party, which describes itself as a “new generation” of Black Panthers. This is the face of the future inbred terrorists in America.

Here he is killing a cop ‘execution style’:

His young sister spoke out on Wednesday, before the ambush, claiming on social media that cops needed “to get a taste of the life we now fear.”

“(I’m) tired of y’all tryin to be on these cops side making it okay based off irrelevant info when our own get killed over unjust s—,” Nicole Johnson said on Wednesday.

And if the Palestinian excuse for killing Jews is “the occupation,” these have the same principles: “it’s the cops.” The Black Power Political Organization wants their rhetoric to be heard:

The only true way us black people can liberate ourselves from white supremacy, and other race control! Is by using the same methods they use to control us, against them! That’s the same technique Zionist Jews use to liberate their people! By targeting the head, the people with the power and authority to make the changes we want! White Leaders and leaders of other race are the ones with the power and authority to make the changes us black people want! All it takes is to get influence and control over them like the Jews did. Then we will be able to force them to do what we want! All of that is easy to accomplish! You either use economic influence to control them. Or you use an independent assassin group to target these leaders and their families until they do what we want! Zionist Jews use both techniques! So don’t worry yourselves, a better tomorrow is coming for us black people. (From Black Power Political Organization – BPPO)

There is little difference from ISIS.

Our Mission Is To Free Africa And All Black Based Countries From Non Black Control! And Give Black People The Opportunity They Need To Develop Themselves And Reach Their Full Potential!

Free Africa from what? Other African dictators? Have at it, then, and move to Africa. They say they want to rule Africa:

We Are A Powerful Political Group Of Patriotic, Pro Black, Pan African Leaders! Who’s Job Is To Rule And Control Africa, And All Black Based Countries! So To Avoid Corruption, Bribery, Exploitation, Non Black Control And Every Form Of Ailments Preventing Black People And Africa From Reaching It’s Full Potential!

And how will they accomplish this goal?

To Accomplish Our Goal! We Will Be Working With (Black People Protection Agency AKA “BLACK KNIGHTS”)! A Powerful Group Of Well Trained Professional Sniper Assassins, With Tens Of Thousands Of Assassins Located All Over The World, In Every Country! Who’s Job Is To Hold Government Leaders And Other Powerful People All Over The World Responsible When They Fail To Give Black People Equal Rights And Justice In Their Countries.

And they want to kill us by taxing us:

Our Organization Will Be Finance Through Taxation And Other Means! (Like I always say! To free yourself from the white man. You will have to become like the white man.

These give themselves special privileges which they do not allow others. What difference are they from the way they paint their enemies?

And who allowed such groups to flourish?

In fact, such radical groups work within the U.S. government. Take lets say The Institute for Muslim Minority Affairs (IMMA), Taha Jaber al-Alwani, whom Hillary’s aid, Huma Abedin, and her family support while also harboring similar ardent anti-Semitic views. Al-Alwani runs the United States Department of Defense program (out of all places) for training Muslim military chaplains in the U.S. military. We translated some of his quotes on the issue of The Muslim Minority Affairs:

“… it [MMA] is a Jurisprudence for a group confned to its special circumstances which is allowed what others are not.”

In other words, these groups are entitled to certain privileges others should not have. These are groups bred to have a ‘superiority complex’.

Alwani, a man commissioned by our government, even calls for a soon-to-be military conquest and provides an official fatwa in preparation for the use of force:

“Commitment to the Quranic concept of Geography: The land belongs to Allah, his religion is Islam, and every country is already in the House of Islam—now in the present time—since they will be in the House of Islam by force in the near future. The whole of humanity is a Muslim Nation: it is either ‘the religion of the nation’ which has embraced this religion [Islam], or a ‘proselyte nation’ we are obliged to conquer.” (Alwani, The Jurisprudence of Muslim Minority Affairs. No. 7)

Alwani speaks of a future, literal war from within. This is why we see people like Nidal Malik Hassan attacking military personnel. Such infiltration is on all levels: military and civil. In America, even the Director of the Islamic Center of Lubbock Texas, Mohammed bin Mukhtar Shanqeeti, agrees:

“The Muslim Minority Jurisprudence is not a heresy or a novel, it’s an ancient doctrine flled with the provisions for Muslims living in Dar al-Kufr (House of the Heathen) or Dar Al-Harb (House of War).”

Even the Abedins’ Journal for Muslim Minority Affairs (JMMA ) confirms that their program stems from these same extremist sources:

“The theory of the Jurisprudence of Muslim Minorities is most easily clarifed by shedding light on its founders” which the notes state are none other than Muslim Brotherhood “Yusuf al-Qaradawi” and “Taha Jabir al-Alwani.”

No matter how one slices and dices these groups, from Black Power Political Organization (BPPO), BlackPower, BlackKnights, Muslim Minority Affairs, Black Islam … these are all affiliates of Nation of Islam which is supported by Muslim groups such as The Council on American Islamic Relations (CAIR).

The intent is to foment revolution in America. While CAIR is truly an external force, using African Americans has been the call of every Islamist since I can remember . My father, who taught Islamic studies since I was six years, spoke of this tactic and of how the blacks are enslaved by whites. President Obama is reviving an old mummy and Islam has manipulated blacks from the dawn of time.

SO WHAT CAUSED THE DALLAS MASSACRE?

“We’ve seen the sickening videos of black Americans killed in traffic stops. Lives ended by those sworn to protect them.”

For a while, we have reported that Americans fear Muslim external forces like Al Qaeda, ISIS, and the Taliban, which they should. But for the last several years, Americans have been taught to fear the cops instead. What we are facing here is the degrading of a society from the evils within. This is no longer an external problem. The left-leaning U.S. government is allowing evil to fester. The labels matter little, since all of them share a common leftist ideology. And yes, Islam, like Black Lives Matter, is also leftist. These consider the United States to be imperialist oppressors that must be destroyed in order to give minorities “freedom.”

There is no difference in the goals of Black Lives Matter, Black Nights, or the Muslim Minority Affairs. These are all using their ‘minority status’ to create havoc within a society until they see it destroyed from within.

From Hillary to Obama to the Department of Justice, they are not taking any action against the real hate-filled groups, but instead, they are labeling anyone who hates evil as ‘haters’. This is why such groups have gone unchecked. Social media and government target what they label as ‘Islamophobes’ and ‘homophobes,’ all while targeting whites and police officers becomes legitimate – and what is blamed in the end is the gun.

Shoebat.com reported last night that the organizer of the Dallas Black Lives Matter rally is a sodomite pro-Muslim agent by the name of Jeff Hood. In 2015, after American Christians protested an Islamic event in Dallas, this reprobate Jeff Hood said:

“I think that Texas Muslims are the real Christians.”

Disguising himself as a Baptist minister to cover his Islamic sentiments, in one statement, Hood espouses the Muslim perspective about Jesus. In his website, he posts a picture of Jesus dressed as a Muslim. In Hood’s book The Courage to be Queer, he blasphemously wrote: “In fully living into the Queer within, Jesus became different and made all the difference.” He also stated: “Jesus was the most queer person on Earth.”

Obama, like Hitler in his final days, insisted on keeping the trains rolling with Jews to Auschwitz. Evil must go on, but it is on full throttle before the devil departs. Obama is now acting quickly, since the devil knows his time is short.