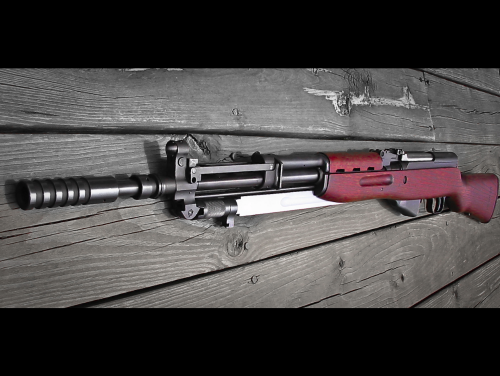 Though there have been several conflicting claims floating around on the internet, most mainstream news sources are currently suggesting that Micah Xavier Johnson used an old SKS rifle to kill 5 police officers in Dallas on Thursday. If true, it would certainly throw a wrench in the typical mass shooter narrative that gun control advocates hold so dearly.

That’s because the SKS is no assault rifle. It’s a popular military surplus arm developed and mass-produced in the 1940’s and 1950’s in several communist nations. Most variants of the rifle are heavy, fire from a fixed 10 round magazine, are loaded with 10 round stripper clips, and use the same intermediate cartridge as the AK-47. It’s so tame that it can be sold in states like California without any modifications.

Even with some of the aftermarket modifications that are available, the SKS is not an ideal weapon for going toe to toe with dozens of armed police officers (and yet Micah still managed to kill and injure all of those cops with it). There are extended fixed magazines that hold 20 or 30 rounds, but they still require troublesome stripper clips to reload, and are nearly impossible to reload before completely emptying the magazine. There are aftermarket detachable magazines available, but they are notorious for having reliability issues. It’s possible that he used a Chinese SKS that can accept AK magazines reliably, but they are fairly hard to find these days, and often cost just as much as an AK-47. If that were the case, why wouldn’t he have just bought an AK-47 instead?

If he really did use an ordinary SKS, it was probably a weapon that is a far cry from the “assault rifles” that the Left is always screaming about after every mass shooting. However, that hasn’t stopped countless mainstream media outlets from calling the weapon he used, an “SKS assault rifle.”