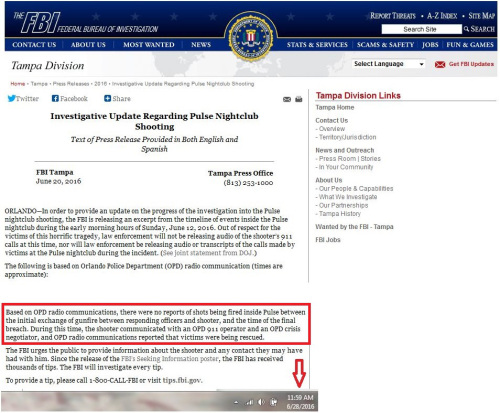 In the early morning hours of June 12, 2016, a lone gunman named Omar Mateen killed 49 and wounded another 53 inside Pulse night club, a self-described gay dance club in Orlando, Florida, making it the worst mass shooting in the history of the United States.

That’s the official narrative told to us by government and media. To quote an official summary of the shooting released by the Orlando Police Department “throughout the day on Sunday, June 12” which is still on the department’s website [bold and colored emphasis supplied]:

On June 12, 2016, just after 2 a.m., an Orlando Police Officer working extra duty at the Pulse Nightclub, located at 1912 S. Orange Ave., responded to shots fired. Our officer engaged in a gun battle with that suspect and the suspect went deeper into the club where more shots were fired. The incident then turned into a hostage situation.

At 5 a.m., the decision was made to breach the club and rescue the hostages, OPD Chief John Mina said. Officers were able to rescue 30 hostages and lead them to safety. Our SWAT Officers exchanged gunfire with the suspect, killing him. The gunman, an American citizen living in Florida, legally purchased the firearms within the last week [….]

A total of 50 people [including the suspect] were killed in the shooting; an additional 53 were injured.

The above narrative is what the American people were told by the media, that:

But what the media didn’t and continue not to inform the public is that the above version of the shooting is simply not true because the FBI-Tampa has a report that says something quite different.

Before we turn to the FBI report, let’s define the words “hoax” and “false flag”:

For the U.S. media, however, the preferred term is “conspiracy theory,” which the media wield to ridicule anyone who so much as suggests an event may be a hoax or a false flag, never mind the fact that there are real conspiracies and false flags. Some notable examples of U.S. government conspiracies are the Nixon Administration’s Watergate conspiracy, the CIA’s MK-ULTRA mind-control project of the 1950s to ’70s, the Tuskegee syphilis study (1932-1972), and the stunning Operation Northwoods of the Kennedy Administration. By the way, number 5 of satanist Saul Alinsky‘s 13 Rules for Radicals is precisely mockery:

5. Ricidule is man’s most potent weapon.

On June 20, 2016, the FBI Tampa Division issued a report on the Orlando shooting, “Investigative Update Regarding Pulse Nightclub Shooting,” with a timeline of the shooting, based on Orlando Police Department (OPD) radio communication. The report says:

Based on OPD radio communications, there were no reports of shots being fired inside Pulse between the initial exchange of gunfire between responding officers and shooter, and the time of the final breach.

Below is a screenshot I took of the above paragraph. (I cropped out the timeline, highlighted the paragraph with a red bracket, and painted the red arrow pointing to the time and date when I took the screenshot.)

In other words, according to the FBI, between 2:02 a.m. (when Mateen exchanged fire with the off-duty police officer at the front door of the nighclub) and 5:02 a.m. when police breached and entered Pulse, NO SHOTS WERE FIRED INSIDE. That, in turn, means that no one was killed or wounded inside Pulse until after 5:02 a.m.

Needless to say, the FBI report contradicts the Orlando PD’s official statement that “the suspect went deeper into the club where more shots were fired.”

Curiously, the Orlando Police Department (OPD) gave a link to the FBI report, but neither acknowledges that the report contradicts the OPD’s version of events, nor retracts its official statement on the shooting.

So how and when were the 102 people inside Pulse killed or wounded? Who actually shot them?

Note that neither the OPD nor the FBI say when Mateen was killed. Why is that? Was he killed soon after law enforcement had breached the club’s walls at 5:02 a.m.? If so, then Mateen could not have shot 102 people.

Amazingly, as reported by the Daily Mail on June 13, 2016, Orlando Police Chief John Mina admitted that “some of the victims may have been hit by officers’ gun fire”.

Why is this stunning admission not widely reported? And shouldn’t the families of the 49 who were killed, as well as the 53 who were wounded in Pulse that morning, demand to know who exactly had shot them?

A rule-of-thumb about any narrative is that when there is clear evidence of fakery, the truthfulness of the entire narrative becomes suspect.

It is now a month after the Orlando shooting, and the Alternative Media have unearthed many oddities and anomalies, including eyewitness accounts of multiple suspects, Mateen and several club patrons having had professional acting experience, and pre-dated tweets and news reports.

Among the anomalies is one particular oddity that is a “smoking gun” of Orlando fakery — a CNN news video showing survivors of the shooting massacre carrying wounded victims toward, instead of away from the crime scene of Pulse nightclub, which makes no sense whatsoever, unless the entire spectacle had been staged for the news media. One of those carrying the wounded is a man in a hat and an American-flag t-shirt named Christopher Hansen, who gave harrowing accounts of how he had survived the massacre to many media outlets.

As soon as the trio had passed in front of the camera, the two carriers immediately dropped the “wounded” man. One of the carriers, dressed all in black, even did a little dance.

Below are nighttime and daytime (Google Map) views of Dunkin’ Donuts and Pulse nightclub on So. Orange Ave., which show the crisis actors indeed were carrying the “wounded” toward Pulse:

Given #1 (FBI report) and #2 (crisis actors), there is no reason for us to believe the official narrative of the Orlando gay-club shooting.

All of which would explain the “duping delight” (glee at getting away with a great deception) of the laughing policeman with grey hair and moustache standing behind the speaker in the first video below, followed by a video of the members of the Orange County Sheriff’s Office doing their #KeepDancingOrlando gig (h/t Barry Soetoro Esq.).

Who knew the worst shooting in U.S. history could be such fun?

For all the posts FOTM has published on the Orlando shooting, go here.