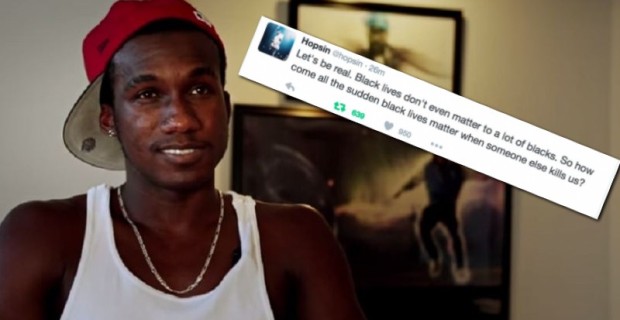 But is forced to delete tweets after backlash from BLM supporters

Prominent rapper and record producer Hopsin told the truth about ‘Black Lives Matter’ in a barrage of tweets that he was subsequently forced to delete, remarking that BLM activists can’t claim to care about black lives until they address the elephant in the room – black people killing each other in huge numbers.

Hopsin – real name Marcus Jamal Hopson – posted the tweets in the aftermath of the deaths of Alton Sterling, Philando Castile and the five Dallas police officers who were murdered by a Black Lives Matter-inspired extremist.

Remarking that he loved all races, Hopsin said the “black lives argument” was “contradicting” because many more black people kill other black people every week than officer-involved shootings of black people.

“Black people, we can’t expect ANYONE to respect us unless we respect ourselves first. Life doesn’t work like that,” tweeted Hopsin, who has over half a million Twitter followers.

“Let’s be real. Black lives don’t even matter to a lot of blacks. So how come all the sudden black lives matter when someone else kills us?” he added.

Although the tweets were archived, they subsequently disappeared from Hopsin’s page, suggesting that he was almost certainly pressured into deleting them after a backlash from BLM mobs on Twitter.

One Twitter user labeled Hopsin “ignorant” while another remarked, “If you can’t see why #BlackLivesMatter, then you’re no better than them.”

However, Hopsin’s comments are completely backed up by the facts.

Around 93% of all black murders are committed by other blacks according to the U.S. Bureau of Justice Statistics, despite the fact that blacks only make up around 13% of the population.

Hopsin’s refusal to swallow ‘Black Lives Matter’ race-grievance bait is not surprising given the lyrics to some of his songs like the one embedded below, which encourages young blacks to reject the ghetto-chic gangster culture that glorifies criminality.

Hopsin was not the only celebrity to face the wrath of ‘Black Lives Matter’ agitators on Twitter this week.

Despite the tweet only appearing for minutes, Lopez was hit by a barrage of invective from BLM supporters. According to ‘Black Lives Matter’ co-founder Marissa Jenae Johnson, using the term “#AllLivesMatter” is a “racial slur”.