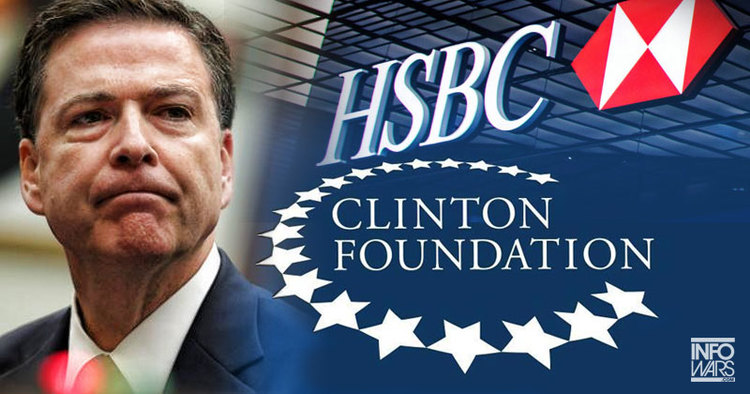 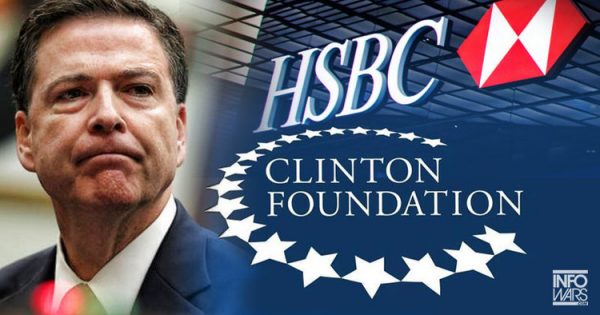 There have been many questions raised with regard to FBI Director James Comey‘s unwillingness to push for criminal charges against Hillary Clinton for her clear violation of law regarding her personal email server and compromising national security. One such concern now is Mr. Comey’s connection to HSBC Bank, which is intricately tied to the Clinton Foundation.

Comey was appointed as Director of HSBC Holdings plc in January of 2013, though he did not assume that role until March of that year. According to a post on the HSBC website, he was to be an “independent non-executive Director and a member of the Financial System Vulnerabilities Committee,” and was to serve for three years.

Of course, being a part of a bank does not then assume corruption. However, it is notable that The Guardian did report, “Clinton foundation received up to $81m from clients of controversial HSBC bank.”

Commentator Bill Still breaks down some of the ties that seem to abound concerning Comey, The Clinton Foundation and HSBC. Take a listen to his brief comments.

On Monday, they sent a letter demanding to know why he didn’t recommend federal charges against Hillary Clinton over her use of private email servers. Clinton “clearly placed our nation’s secrets in peril,” the letter states. “No one is above the law, and the American people deserve a more robust explanation for your decision to not recommend criminal charges.”

The letter sent by House Judiciary Committee Chairman Bob Goodlatte of Virginia, and committee member Rep. Trey Gowdy of South Carolina, also mentions emails deleted by Clinton and forensically recovered by the FBI. They want to know if the emails had anything to do with the Clinton Foundation.

Keep in mind that in March of this year, Judicial Watch documented the exuberant amounts of money taken in by The Clinton Foundation and reported, “Our lawsuit had previously forced the disclosure of documents that provided a road map for over 200 conflict-of-interest rulings that led to at least $48 million in speaking fees for the Clintons during Hillary Clinton’s tenure as secretary of state. Previously disclosed documents in this lawsuit, for example, raise questions about funds Clinton accepted from entities linked to Saudi Arabia, China and Iran, among others.

All of this and more led Kit Daniels to conclude, “Comey may be on the periphery of Clinton’s use of foreign policy to raise money for her foundation, but his position at HSBC may explain in part why she received kid glove treatment while others accused of similar crimes were prosecuted. His connection, however tenuous, should be reason enough to revisit the case and appoint a special prosecutor, as Rep. Matt Salmon of Arizona has demanded.”

“Ohio Republican Mike Turner accused the FBI of being ‘steeped in political bias’ and said there should be an ‘independent and impartial decision’ made about the legality of Clinton’s use of email,” he added.

Perhaps this is why Clinton had such confidence in mocking the FBI’s investigation when she said she would never be put in handcuffs. The corruption in DC is incredible. Frankly, I think we need to start thinking in terms of eliminating central government in the manner it is and return to sovereign states as their own countries.