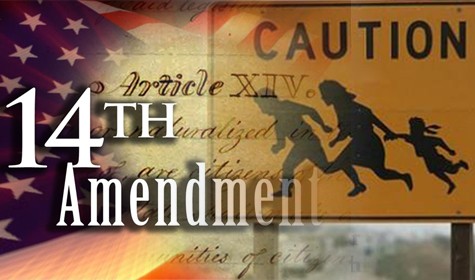 Liberals and anti-Constitution residents of the U.S. don’t understand the purpose of the 14th Amendment. However, the Amendment’s author was pretty clear about its purpose. The inconvenient truth is that the 14th Amendment does not and never has granted U.S. citizenship to foreigners born in the United States.

The 14th Amendment is one of the most misunderstood, and most cited amendment among all of the amendments in litigation in the United States. Its author, Senator Jacob Howard (R-MI), wrote quite clearly the purpose of the law’s scope when he introduced it:

Representatives shall be apportioned among the several States according to their respective numbers, counting the whole number of persons in each State, excluding Indians not taxed. But when the right to vote at any election for the choice of electors for President and Vice-President of the United States, Representatives in Congress, the Executive and Judicial officers of a State, or the members of the Legislature thereof, is denied to any of the male inhabitants of such State, being twenty-one years of age, and citizens of the United States, or in any way abridged, except for participation in rebellion, or other crime, the basis of representation therein shall be reduced in the proportion which the number of such male citizens shall bear to the whole number of male citizens twenty-one years of age in such State.

No person shall be a Senator or Representative in Congress, or elector of President and Vice-President, or hold any office, civil or military, under the United States, or under any State, who, having previously taken an oath, as a member of Congress, or as an officer of the United States, or as a member of any State legislature, or as an executive or judicial officer of any State, to support the Constitution of the United States, shall have engaged in insurrection or rebellion against the same, or given aid or comfort to the enemies thereof. But Congress may by a vote of two-thirds of each House, remove such disability.

The Congress shall have the power to enforce, by appropriate legislation, the provisions of this article.

When it was first introduced and debated, controversy surrounded the Amendment mentioning of the role of the states, which President Andrew Johnson opposed.
According to The Federalist Papers Project, Howard wrote, in part, “that every person born within the limits of the United States, and subject to their jurisdiction, is by virtue of natural law and national law a citizen of the United States.”

“will not, of course, include persons born in the United States who are foreigners, aliens, who belong to the families of ambassadors or foreign ministers accredited to the government of the United States, but will include every other class of persons.”

Clearly, the 14th Amendment was never intended to be misused as it has been by judges and politicians, who obviously did not understand American history or constitutional law. The 14th Amendment does not grant citizenship to anyone other than the freed slaves of the Civil War. It does not make a citizen of anyone born on U.S. soil. It matters not if the parents are in the U.S. legally or illegally. None are citizens, according to the 14th Amendment.

The concepts of “birthers” or “anchor babies” or “birthright citizenship” for illegal immigrants and their children born in the U.S., are all moot points. They are nonstarters as they have nothing to do with the U.S. Constitution or the 14th Amendment.

The 14th Amendment specifically states that U.S. citizenship does not apply to any foreigners born in the United States.