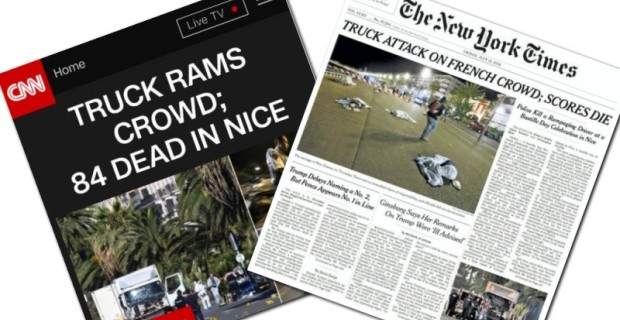 Leftist media outlets reacted to the devastating attack in Nice not by blaming Islam or even terrorists, but by suggesting that an inanimate object – the truck – was responsible for the carnage.

Instead of pointing the finger at Islamists, CNN, CBC and the New York Times all published headlines that served to hide the true nature of the attack.

CBC reported, “Children feared killed in Nice as truck attacks family event”. Presumably, the truck was somehow able to manifest artificial intelligence and plough itself through dozens of victims.

Not to be outdone, CNN reported “Truck rams crowd; 84 dead in Nice,” again providing a convenient way of avoiding any mention of the ideology that inspired the driver.

The New York Times went with “Truck attack on French crowd; Scores die,” again pinning the blame on the vehicle rather than the Islamist inside it.

Given that the truck alone, and not the ideology that radicalized the terrorist who used one as a weapon, is to blame for the massacre in Nice, the solution to stop further violence is simple; Ban deadly assault trucks.