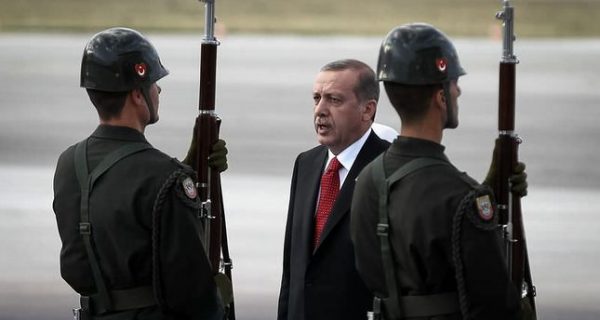 Obama recently stated that what must be supported is the “democratically elected government of Turkey”. Now there is footage of Turkish people going against tanks and the military. The mosques exhorted the people to go out to the streets and chant “Bismillah!” (“In the name of Allah), the very Mark of the Beast that we have been warning you about. What is going to happen? These are all the right ingredients for a populist roar on the part of Erdogan. Erdogan has already said:

“Go to the streets and give them their answer … I am coming to a square in Ankara. … This was done from outside the chain of command …Those who are responsible, we will give them the necessary punishment”

These are the words of Islamist populism, and its only the incipient stage for absolute Islamist despotism. Erdogan also stated:

“I urge the Turkish people to convene at public squares and airports. I never believed in a power higher than the power of the people.”

Again, this is the language of populism; the use of the masses for the glorification of one man in whom they perceive to be a salvation for the people.

Erdogan will come out and declare that it was “the people” who want him and who went against the coup. Erdogan will use the coup to establish full scale absolute tyranny and sharia law. The United States will allow Turkey to implement Islamism. If Donald Trump wins (and I believe he will), he will have an isolationist policy that will turn the other way (and will probably provide support in some indirect way) as Turkey controls the Muslim world. Mike Pence, Trump’s VP pick, is very pro-Turkey, so much so that he rejected — and encouraged other Republicans to do the same — a bill that would recognize the Armenian Genocide, in which millions of Christians were slaughtered by the Turkish Ottoman government. Genocide will be done by Turkey in the midst of Western silence; millions of Christians will be massacred. The horrors of the anti-Christian Genocide once done by Turkey will be conducted in the future.

What is happening in Turkey is a Reichstag Fire. I believe this was planned out by the Turkish government in order to enflame the zeal of the masses so that they can get behind Erdogan, and they will support his tyranny with embracing arms, as a madman feels justified in his madness.

Theodore Shoebat is the Communications Director for Rescue Christians, an organization that is on the ground in Muslim lands, rescuing Christians from persecution. He is the author of two books, For God or For Tyranny and In Satan’s Footsteps: The Source and Interconnections of all Evil , he also has a DVD series called “Christian Militancy,” which is on Christian warfare and our fight against evil and tyranny.