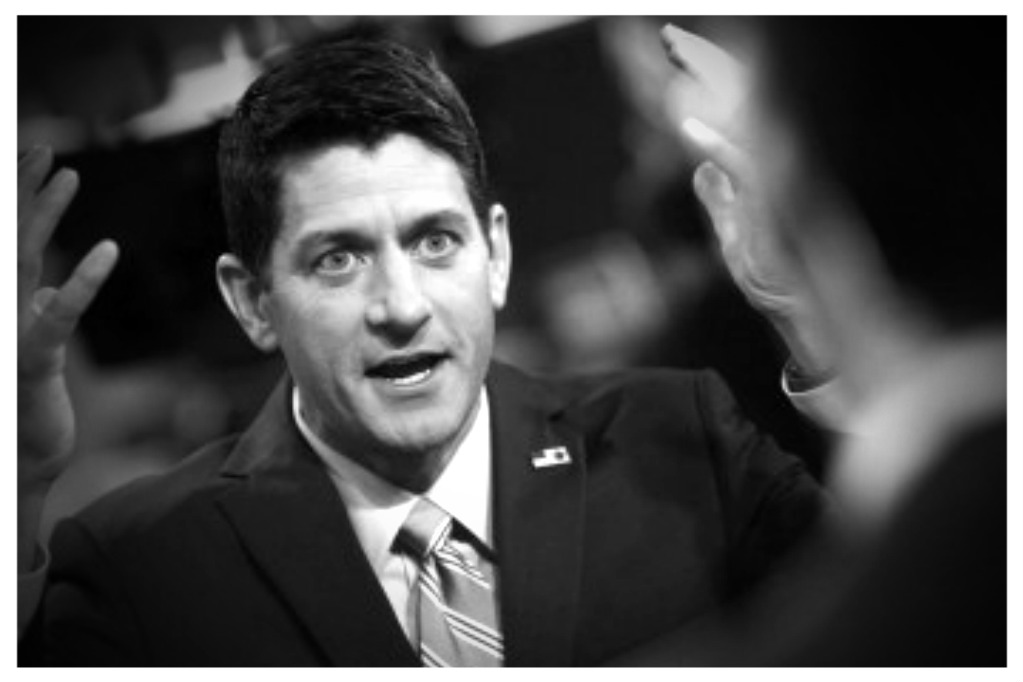 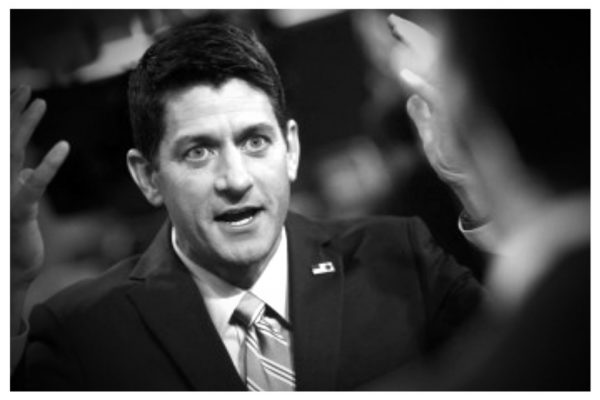 Every member of the House of Representatives is up for re-election in November. Taking their track record into account, one can expect to see plenty of “smoke and mirrors” campaign rhetoric, flyers and mailers. Out of the shoot for the upcoming elections is none other than House Speaker Paul Ryan, Republican from Wisconsin. Ryan has seen his support drop below 50% in his home district. In response, Ryan has developed and sent out new mailers to urge continuing support.

What is his re-election platform? Surprisingly, it is border security, strengthening the military and protecting freedoms. His slogan is “Putting America’s National Security First.” Feel free to drop your jaw in disbelief, laugh hysterically, or shake your head. One wonders if there are two Paul Ryans or maybe just one with two distinct personalities.

House Speaker Ryan is the same Ryan that championed a spending bill that funded all of Hussein Soetoro’s open border agenda – sanctuary cities, illegal unconstitutional executive amnesty, and release of illegal alien invader criminals. This is the same Ryan who plans to “bring up ‘criminal sentencing’ measures that could release thousands of illegal alien invader criminals from prisons onto the streets” one month after the primary election, according to a report referenced by Breitbart.

Last October, the President of the Immigration and Customs Enforcement (ICE) Union— which represents approximately 5,800 frontline ICE officers, agents and personnel who are responsible for enforcing America’s immigration laws— wrote a letter to the Senate Judiciary Committee expressing opposition to the so-called “criminal sentencing reform” measures.

The ICE Union warned that some of the discussed proposals could result in the “mass release of criminal aliens from federal prison.” ICE highlighted the proposal’s impact on public safety, and noted that it could “further hampe[r] immigration enforcement within the United States.”

“According to a recent article in the Washington Post, 1 in 3 of the 6,000 federal prisoners that the Department of Justice recently handpicked for early release is an alien,” wrote ICE Council President Chris Crane. “I understand that both houses of Congress are also exploring legislative measures that could lead to the release of additional criminal aliens. Notably, these releases will be in addition to the thousands of criminal aliens who are being released into communities from sanctuary jurisdictions across the country every month.”

“Countless preventable crimes against children, rapes, robberies and murders will most likely occur as a result of these proposed mass release,” Crane added.

Normally when a politician runs for re-election, said politician will highlight their achievements while in office that correspond with the platform upon which the individual is campaigning. Where are the achievements for Ryan to correspond to his platform? The achievements are not listed because there are none. His entire mailer is based in fantasy – what he claims to stand for is what he has repeatedly gone against.

According to a reference by Breitbart, Ryan has spent two decades (20 years) pushing for open border policies. This includes actions taken using his power as the Speaker of the House.

Along with voting to fund all of Hussein Soetoro’s open borders agenda, Ryan supported and voted for funding to expand Muslim “immigration” to the tune of 300,000 per year. One might as well say Muslim importation since the federal government has zero measures in place to even vet these individuals before dumping them on the doorstep of America. While Ryan and others may refer to this as “Muslim Migration,” it is not migration but immigration. There is a big difference. Despite the fact that seven out of ten GOP voters in Wisconsin support pausing Muslim immigration into the united States, Ryan barreled ahead with his support for this importation.

Ryan did not stop there. He supported and voted to fund Hussein Soetoro’s executive amnesty issued in 2012 for illegal alien invaders who supposedly entered this republic as children. “Ryan’s bill also rewarded sanctuary cities with federal grants. He also provided funding for the resettlement of illegal aliens within the United States, the release of criminal aliens, and tax credits for illegal aliens.”

Ryan has received plenty of help in his deception of the public. In 2013, an ad defending Ryan ran by an affiliate of Mark Zuckerberg’s pro-amnesty lobbying group claimed Ryan opposed amnesty.

Politico reported that “the spot from the FWD.us affiliate begins with a picture of Ryan and says, ‘Amnesty? Not a chance,’ and goes on to say the House budget chairman is looking at a ‘conservative solution’ to the issue of immigration.” Zuckerberg’s pro-amnesty group spent $350,000 on the ad-buy to convince conservative voters that Ryan does not support amnesty— even though Ryan supports giving citizenship to illegal immigrants.

“Open Borders is in his ideological DNA,” NumbersUSA President, Roy Beck, has explained. “Open borders seeps out of every pore of his being. This isn’t personal, it’s just who he is… Paul Ryan is the heart and soul of crony capitalism.”

A 2015 PBS documentary exposed Ryan’s extraordinary efforts to pass Hussein Soetoro’s “immigration,” more aptly put as invasion, agenda. The documentary highlighted Ryan’s partnership with notorious open borders advocate and “champion of the illegal alien” Democrat Luis Gutierrez to champion the Rubio/Soetoro amnesty agenda. Gutierrez became notorious for his support of illegal alien invaders when he said, “I have only one loyalty… and that’s to the immigrant community.” Clearly, Ryan has allied himself with a treasonous malfeasant in the past that rejects loyalty to the Constitution in favor of illegal alien invaders.

In fact, Ryan himself stated to a group of Hispanic voters, “This is the American Dream. This is the American idea. Look, put yourself in another person’s shoes, which if you’re in elected office, that’s what you kind of have to do that almost every single day. The job we have–and what we do is we take different people’s perspectives. The gentleman from India who’s waiting for his green card. The DREAMer who is waiting. We take all these different perspectives. We process it through our values and our morals and our principles. And then we come up with the answer to try and solve this problem. That’s basically what we do in our jobs.”

To get the full impact of the collusion between Ryan and Gutierrez, Breitbart continues:

At a joint event with Gutierrez in 2013, Ryan made the case for dissolving borders—declaring unabashedly that the United States “is more than [its] borders.”

Two years later, Gutierrez was one of Ryan’s earliest endorsements for House Speaker.

“Paul Ryan and I talk,” Gutierrez told the filmmakers in 2014. “What we do with Ryan,” Gutierrez explained, “is he puts together a bunch of bills, one of which is legalization, and that’s the one we join him on. The legalization is good enough that I can go and say we need to get in bed.” [emphasis mine]

Gutierrez told filmmakers that their collaboration had to be conducted in secret, so as not to tip off Republican voters. “You feel like you have to kind of sneak around to have dinner with these guys,” Gutierrez’s communications director, Douglas Rivlin, said, referring to his secret meetings with House Republicans to push amnesty. “Unlike some of you [expletive deleted], I don’t mess around with my wife, so–but let me tell you–right? I feel like I’m sneaking around right on my Party … when I have dinner with you guys,” he said. [emphasis mine]

What Ryan is now doing is nothing short of intentional lying to the people of Wisconsin and declaring his voter base as fools. With this outright false mailer, Ryan is telling the people, “don’t look at my past track record, vote for what is contained in this mailer since I think you all are too stupid to check what I’ve done.” According to Breitbart, Ryan is pulling an “Eric Cantor,” who in 2014 distributed “deceptive” mailers touting himself to be anti-amnesty when in fact, he was in bed with Gutierrez as well in the pro-amnesty camp. Cantor ended up being defeated because voters in Virginia were not fools nor were they stupid.

No lamestream enemedia is going to point out this blatant move by Ryan. In fact, the timing could not be worse for Ryan to engage in this type of campaign, unless it is by design. With Donald Trump storming strongly on the scene campaigning on securing the border, pausing Muslim immigration and importation, and stopping illegal unconstitutional executive amnesty by Hussein Soetoro, Ryan is either attempting to keep his position to thwart Trump, if Trump is elected, or actively working to get the voters of Wisconsin to reject him and the Republican Party in general to hand the election to Democrat Hillary Clinton.

Remember, Republicans in the House put Ryan in the Speaker position. What does this say about the Republican Party as a whole when its most prominent member, the Speaker of the House, mails out false propaganda to the voting base? Democrats already know their voter base will vote Democrat even if its most prominent member committed numerous crimes and lied about it. Democrats know they can count on its party’s low information voter support and those with 36-hour news memory to stand in their camp. Republican voters, on the other hand, will reject the Party and either vote third party or stay home, which could hand the election to Hillary Clinton.

Let’s face it, America, both political parties are rotten to the core and work to manipulate the voter base using whatever propaganda methods they think will work – even treating the voter base as stupid or as fools. Voting for a Democrat is surely to lead to more oppression, tyranny and eradication of unalienable God-given rights. Unfortunately, voting Republican is no guarantee of preserving those unalienable God-given rights since at every turn Republicans have capitulated to Democrats and Hussein Soetoro since their “one knee begging stunt” for the public to give them a majority in the Senate to stop the lawless Hussein Soetoro. How’s that working out for everyone?

The corruption in both parties and Washington, DC runs so deep it makes the Challenger Deep look like a ditch on the side of the road. Citizens should know it has become almost irreparable when the Republican Party works to sabotage its own primary election winning candidate. At this stage of the game, and it is a game to the politicians, there is no simple or effective solution for citizens of good conscious to take. Trump said it and it is abundantly true, “the system is rigged.” How does one get out of a system that is rigged? That’s the freedom awarding question isn’t it?

With regards to Ryan, his fate is in the hands of the voters in his district in Wisconsin. The Republican voters will have to decide to accept his propaganda or reject it in the August primary. Hopefully, Wisconsin Republican voters will despise being thought of as stupid or fools. Regardless of the intention of Ryan, his blatant willingness to peddle false propaganda deserves the proverbial boot from office.