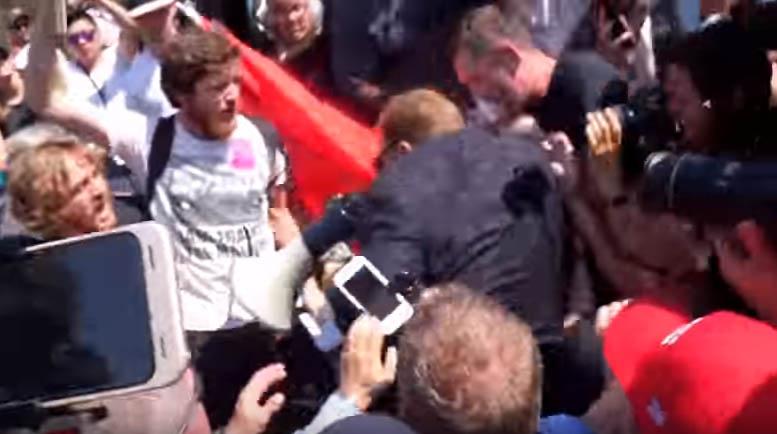 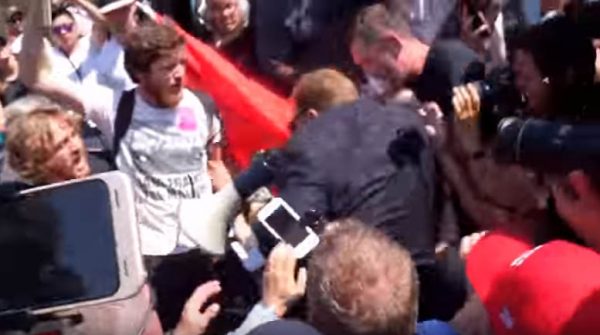 On Tuesday July 19, I attended the protests outside of the Republican National Convention in the Public Square in Cleveland, Ohio. The Square was filled with a large presence of protesters, police, and supporters of radio show host Alex Jones.

I began to make my way through the crowd in an attempt to question Jones on his support for Republican Presidential candidate Donald Trump. As Jones bullhorned his way through the mass of people Anti-Jones protesters could be heard screaming “Nazi Scum!”. From my perspective (shown in the video) Jones went directly to the counter-protesters as he attempted to make an exit from the growing audience. The video clearly shows the protester with the red flag bump Jones with his forearm. The protester did not throw a punch or shove Jones, but gave him a slight bump. Alex Jones responded by diving at the protester causing a melee of cops, protesters, and Jones supporters.

Immediately after this happened the police rolled in with their bikes and began smashing against anyone standing in their way, violently shoving me back.

Alex Jones was escorted to his car by the police, captured by the excellent Press For Truth video by Dan Dicks below.

After the fight, the authorities erected a mini-police state around the Public Square that continued for the rest of the day and night.

See the video below for an interview with the communist protester to hear his side.

I leave it to the viewer to decide what they see in the video and make their own judgements about Alex Jones and the protester.

Derrick Broze is an investigative journalist and liberty activist. He is the Lead Investigative Reporter for ActivistPost.com and the founder of the TheConsciousResistance.com. Follow him on Twitter. Derrick is the author of two books: The Conscious Resistance: Reflections on Anarchy and Spirituality and Finding Freedom in an Age of Confusion. Derrick is available for interviews. Please contact [email protected]