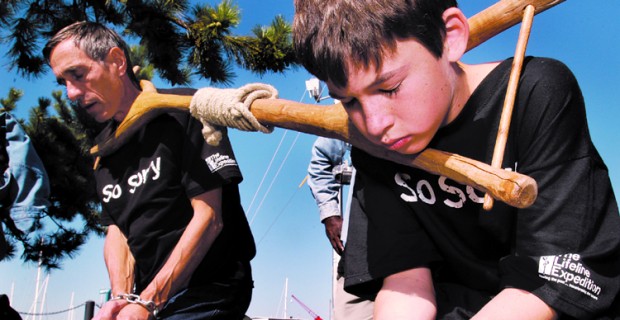 Self-loathing whites offer to clean for, massage & be shouted at by blacks to atone for slavery

A new “reparations” website asks white people to pay black people’s rent and give them money to relieve their white guilt.

The website, started by Seattle-based “conceptual artist” Natasha Marin, suggests a number of ways in which white people can atone for the fact that 1.4 per cent of white people owned black slaves in the United States over 150 years ago.

Examples on the site’s ‘about’ page include;

White Person 3: “I’ll get them for you. PM me and I’ll send an Amazon Fresh or Safeway delivery. You just pick out what you want. I have a $200 limit.”

POC 4: I’m too upset to make dinner. I live in Seattle.

White Person 4: “Come over to my house for dinner, bring a friend if you like. PM me and I’ll send you the address, or can I order delivery to you? What kind of food do you like?”

POC 6: I want to scream and cuss at someone.

White Person 6: “I volunteer as tribute. How do we set this up?”

POC 7: I want to escape this cruel world in a *Specific Videogame* but can’t afford it on Steam right now. This is not a crisis, I just don’t trust people easily and want to see if this works.

White Person 7: Thank you for giving me the chance to do something concrete and relatively easy. I was quietly hating myself for doing nothing.

Numerous white people beset with self-loathing have already offered a number of goods and services, including the free use of a car, house cleaning, massages, “catharsis,” and straight-up cold hard cash.

Black people have also posted messages on the site with requests for free laptops, a Kindle EBook Reader and recording studio access.

“I want my project fully funded or at least my phone paid for from here till December so I can stay in Boriken writing about Amerikkkan colonialism,” another man demands on the ‘Reparations’ Facebook page.

Someone else asks for recording studio time so they can record, “an album entitled “White Boys” to vent out my frustration on, well, white boys.”

Before you say it, no this is not a joke, despite the fact that it’s absolutely hilarious. Every offer or request on the website links to the individual’s personal Facebook profile.

Marin says the website is a way for white people to “extricate themselves from the guilt they are mired in” but that it is in “no way a pardon for years of systemic abuse” (presumably Marin is not talking about the kind of “systematic abuse” that leads to figures like white people being 27 times more likely to be violently attacked by black people than vice-versa).

Marin asserts that the fight for a widescale, government-sanctioned reparations program is “totally legitimate” and should continue outside the confines of her website.

There is no indication yet on whether the website will spawn a copycat catering for white people upset at the Barbary slave trade, a far longer and more brutal period of slavery under which both blacks and whites were brutally oppressed by Arabs.

The concept will no doubt be lauded by ‘Black Lives Matter’ organizer Ashleigh Shackelford (pictured above), who has written a series of articles demanding that white people give her money for being a “fat black bitch.”

After explaining how she was triggered by white people attending BLM rallies, Shackelford said that that they would be better served writing checks and giving up their car keys.

Reparations.me as well as Marin’s Facebook page gives white guilt-ridden leftists the chance to do precisely that.