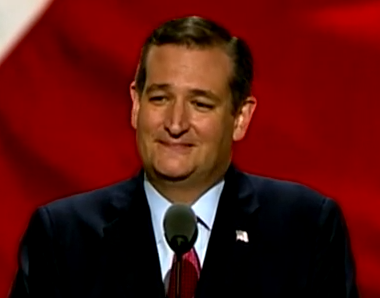 How exactly did Ted Ned Flanders Cruz really imagine that would work out anyway?

Flatly refusing to endorse Donald Trump throughout his entire speech, Sen. Ted Cruz got booed off the stage at the RNC after telling the crowd, “If you love our country and love your children as much as I know that you do, stand and speak and vote your conscience.”

Talking to reporters, Gov. Chris Christie described Cruz’s speech as “an awful, selfish speech by someone who tonight, through the words he said on that stage, showed everybody why he has richly earned the reputation that he has on Capitol Hill.”

What’s perhaps more amusing is that Cruz’s wife Heidi, a co-signer on the Council on Foreign Relation’s North American Union document and former employee at megabank Goldman Sachs had to be led off the RNC floor afterward to chants of “Goldman Sachs”.

Heidi Cruz had to be escorted through an angry RNC crowd yelling "Goldman Sachs" at her! The Republican Party belongs to Trump!#RNCinCLE

Goldman sachs um I mean heidi cruz escorted away from rnc convention. Think about that. What a profound irony.

Oh, and there’s also this. Heh.

Ted Cruz was turned away from entering Sheldon Adelson's suite in the arena after the speech, @danabashCNN reports