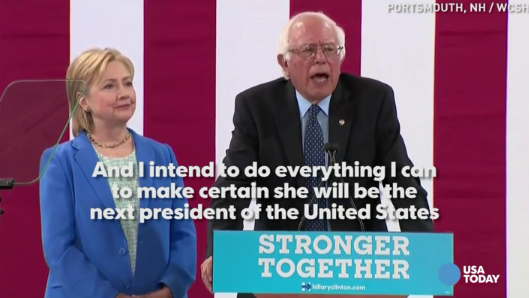 The system is working overtime to force Hillary Clinton down everyone’s throats. Bernie is obviously complicit in it, imploring all of his hardcore supporters to vote for Hillary too. Now that Wikileaks has published the fact that the Democratic National Committee rigged the primaries against Bernie in Hillary’s favor, the convention has been taken over by angry Bernie fans who have booed every time Hillary’s name is even mentioned at the podium.

so, how do you convert bernie supporters into rigged system supporters? DNC is fucked, all their deceptions are unraveling

Now they want everyone, including all of the delegates at the DNC, to truly believe they have no chance, no hope, no other option than the beast that is Hillary, especially if they want to defeat xenophobic, racist, awful scary expletive (insert more liberal propaganda here) Donald Trump.

Because hardly anyone can stand her, this tactic really is the only possible way the establishment has of securing a Hillary presidency (while still attempting to make it appear as if our elections aren’t 100% rigged top-to-bottom).

But, apparently Hillary isn’t the only option Dems have.

After Bernie was booed to oblivion Monday when he implored his supporters to vote Hillary to defeat Trump, his wife Jane was caught on a hot mic afterwards telling him, “They don’t know your name is being put in nomination. That’s the concern.”

Obviously whatever deal was made, he already made it a long time ago.