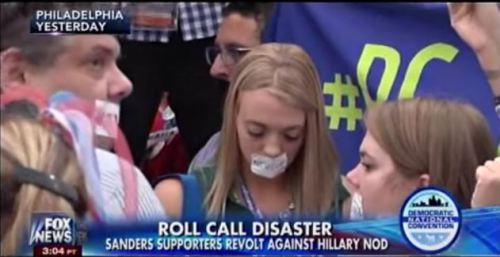 This is how undemocratic the Democratic Party is.

Tuesday night (July 26, 2016) at the Democratic National Convention, during the roll call vote to nominate Hillary Clinton as the party’s presidential candidate, some Bernie Sanders delegates undertook a peaceful protest in the convention hall with a sit-in, their mouths taped shut.

Beginning at the 3:05 mark of the video below, FoxNews reporter Dough McKelway says:

“As you well know, the theme of this convention is ‘United together’. But the reality is something quite different — this is ununited and not terribly together.

We saw further evidence of that last night inside the auditorium when, during the role call vote and Bernie Sanders moved to nominate Hillary Clinton by acclimation, that many of his delegates stormed out of the convention center and they made their way to the media center not far from where we are. They staged a sit-in there, mouths taped shut, amongst the reporters. (Can you imagine trying to write a story on a deadline under circumstances like that?)

Well, decision was made to bring in a SWAT team. The SWAT team made the decision to contain the situation by quite literally containing the delegates.

And while all that was going on, back inside the auditorium, there was a celebratory feel to the whole affair as Hillary Clinton spoke to the delegations combined via video hookup.”

This is just a preview of what America will be under a Hillary presidency.