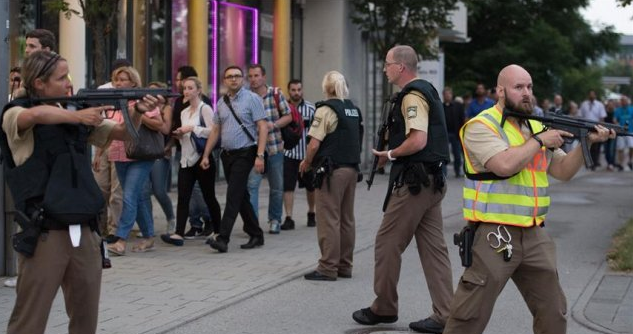 All that just since a vehicle plowed through hundreds of people on the streets in Nice, France. Is there any end to the madness?

No one came to the aid the European people as they cried out about the obscene way in which Middle East refugees were being allowed to storm into the country, as countless women were raped and culture clashes reached fever pitch and many areas became too dangerous to go to anymore.

Now, Muslim radicals, ISIS thugs and lone wolf sympathizers are striking out all across Europe. And it is happening so quickly that the media can’t even cover it all; people have little sense of how far the violence is spreading.

Mass murder and shocking acts of terrorism have become commonplace – and are happening on a daily basis now. The EU is facing an all-out war against foreign invaders who are picking off random targets and fueling chaos, and they are ready to institute a police state in desperate attempt to control it.

Terrorist savages have struck Europe again… Indeed, it is especially horrific – a Catholic priest had his throat cut in the middle of Mass.

.@skymarkwhite has the latest after reports that knifemen who'd taken hostages at a church in Normandy are shot dead https://t.co/VFJNyTgNXN

But attack after attack strains everybody’s ability to respond with the levels of emotion such atrocities demand.

Earlier today a doctor was shot dead by a patient in a German clinic, but attention was dragged elsewhere by events in Normandy almost immediately.

In the previous week in Germany alone there has been a fatal machete attack, an axe attack on a train, a suicide bombing and a shooting rampage in a shopping mall.

The latest reports are drowned out in a deluge of bloody violence – there are more deadly attacks than anyone can really keep track of, and no one feels secure in the idea that it won’t soon happen again. So intently has Europe been bombarded with attacks, that officials are literally warning citizens in France, Germany and other nations to expect attacks:

“The entire EU, with Germany its focal point, is the target of international terrorism. Therefore I’ve been saying for some time now that we’re in a serious situation and we have to expect attacks by small groups of radicalized lone operators in Germany,” de Maiziere said.

Germany, which voted last year for the authorization to do so, is preparing to use their internal army, as well as increased police forces, in the event of a large scale terror attack.

Things are getting quite serious.

During Tuesday’s press conference, Seehofer said Germany is facing “a new dimension of terror,” while Bavaria’s interior minister announced that the state’s police ranks would be increased. Hermann also suggested that Germany’s army (Bundeswehr) could be used to aid police in dealing with major terror threats. The debate over whether to deploy the Bundeswehr domestically should not wait “until the next attack happens,” he stressed, as quoted by General-Anzeiger. Lawmakers in Berlin are also discussing the possibility of establishing “troops of reservists” to aid police during internal crisis situations, German media outlet Bild reported, citing its own sources.

In July, Germany approved its new military roadmap, the White Paper, which allows for the use of the German army inside the country in cases of large-scale terror attacks.

Officials in Germany are now also pushing for greater controls and screenings for asylum seekers. “We need to know who is in our country,” Seehofer said on Tuesday, insisting that the authorities should now consider various ways dealing with refugees that commit crimes.

“You have to seriously consider how such people should be treated if they violate laws or pose a threat,” he told Suddeutsche Zeitung, adding that the country cannot retreat from terror out of a sense of “prudence.”

Officials in Germany are considering deploying the army inside the country in the wake of multiple attacks, while the governor of Bavaria says Islamic terror has already “arrived.”

Doing so will come at a cost, venturing into martial law territory. Every major public arena could be crawling with troops, even as government can do little to stop random terror attacks from individuals motivated by distorted ideologies.

Europe is about to be a much different place, and this contagion may well spread to the United States as well.