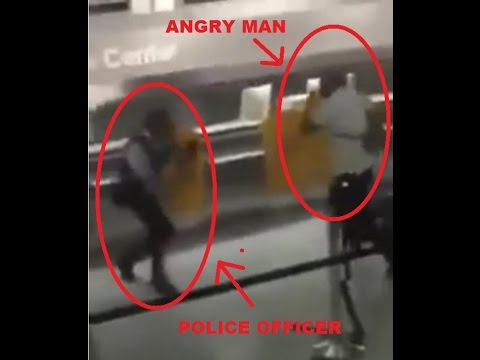 A Muslim man angry at his flight being delayed beat up two police officers at Frankfurt Airport in a video that has gone viral.

The clip shows the man kicking and punching two officers who are incapable of subduing him at a Lufthansa check-in desk.

Other travelers in the background boo and heckle but fail to intervene.

The confrontation ends when the man suddenly drops to the floor. It is unclear whether he was tasered or whether he was just play-acting in order to portray himself as the victim.

The rest of the man’s family, including two Muslim women wearing hijabs then crowd around the police.

Some people claimed that the man was upset because security tried to check his wife’s veil, although there is no confirmation of this.

Frankfurt Police quickly responded to the video after it went viral in a Facebook post, urging people not to spread “anxiety” and “terror”.

“Several thousand passengers were stranded at the airport” due to “bad weather,” states the police response.

The Muslim man and the police officers involved in the fight were “slightly injured,” according to police.

Tensions are high in Germany following a number of Islamist attacks over the last 10 days.