While The UK Sun is reporting that UFO spotters claim this is a giant alien city (*eye roll*), it makes a whole lot more sense, if it is anything, that it might be the outlines of a deep underground military base, or DUMB. 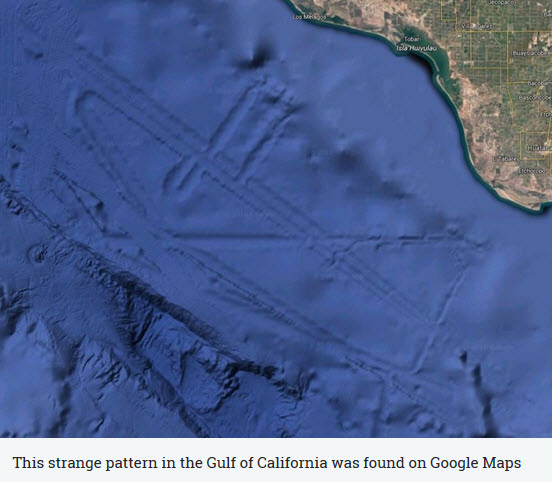 As reported just a few weeks ago, the military began discussing under-ocean military bases back in the 1960s:

For example, in 1968 the Stanford Research Institute discussed the construction of dozens of undersea bases. The study was titled “Feasibility of Manned In-Bottom Bases.” It’s important to show you the abstract here, because it clearly reveals what the military-industrial complex was considering, and what they could do within their technological reach at the time — more than four decades ago.

*I obtained this abstract from the source listed below, if you would like to see it yourself, you can find it HERE.

The construction of thirty manned in-bottom bases within the ocean floors is technically and economically feasible. However, it will be necessary to establish some successive types of experimental facilities before a full construction program can be started. This could take 15 years. The major technology for a land-linked station in-bottom is established now; only adaptations are needed. The remaining experimental phases will require further development of equipment and techniques applicable to remote sea access. There are useful assignments for a succession of three experimental stations other than advancing in-bottom construction techniques. Science and engineering concerned with the oceans and their resources will be furthered and military tests of undersea base functions complimenting deeper operations can be accomplished. The costs of the experimental phase, called here a demonstration program, can be surprisingly modest: approximately one half-billion dollars, spent over 15 years…

Considering that was published by the American Institute of Aeronautics and Astronautics nearly 50 years ago, there’s absolutely no reason to think they haven’t been able to accomplish this by now.

Whatever is on that Google Maps image, it definitely doesn’t look “natural”.

And, let’s face it, the military has been rolling out ye olde alien excuse to cover up anything it wants to do in secret since Roswell, 1947 (coincidentally the same year the National Security Act was passed, hm, fancy that).