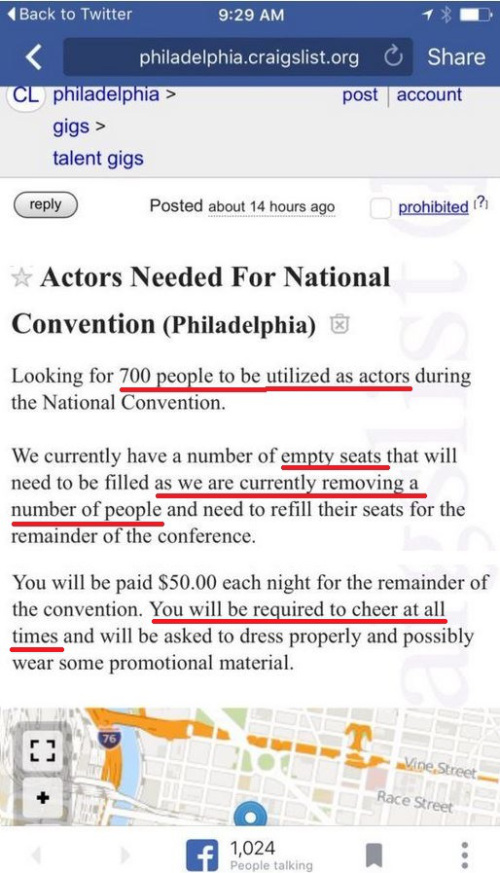 On the night of July 26, 2016, the second day of the Democratic National Convention (DNC) in Philadelphia, an ad was placed on Philadelphia Craig’s List asking for “700 actors” to fill empty seats in the DNC.

The reason for the empty seats?

In the words of the DNC ad, because “we are currently removing a number of people”, no doubt Bernie Sanders supporters.

Although the ad was since taken down, here’s a screenshot of the ad as proof (h/t Gateway Pundit). I added the red underlining for emphasis.

And here’s a screenshot from MSNBC’s live coverage of the convention, showing many empty seats on Day 3 of the Democratic National Convention:

As you saw for yourself, the ad explicitly said the people hired are to be “actors” who “will be required to cheer at all times”.

According to a July 27 tweet by Gateway Pundit‘s tipster, John Binder, the DNC also advertised for racial minorities to hold up Hillary signs at the convention:

Reporting from Philadelphia, independent investigative journalist Wayne Madsen observed yet another DNC fakery and hypocrisy — their indifference to the plight of disabled delegates:

“Many of Monday night’s speeches at the convention were aimed at showcasing the Democratic Party’s commitment to disabled Americans. This editor, however, passed a number of Democratic delegates who were making the long two-mile odyssey from Oregon Avenue to the convention arena. Some were in motorized wheelchairs and one man with a leg problem was on a scooter. One lady suffering from some sort of paralysis was struggling on crutches. Some Democratic commitment to the disabled!”

And as fake as these Democrats: