Near Philadelphia’s City Hall, an obese woman wearing a marijuana leaf bikini was telling a television reporter why she supported Bernie Sanders. City Hall, once the tallest building in the world, is a gloriously magnificent edifice whose pillars are held up by representatives of all the races of the world and whose clock tower is topped by a 37-foot statue of William Penn, was besieged by Sandernistas.

The Democratic convention was underway. Bernie Sanders had endorsed Hillary Clinton. But his followers still believed. If not in Bernie, then in the radical movement that had coalesced around him.

A cheerful woman wearing a “Bernie or Bust” t-shirt told me that even if Bernie won, she would be voting for Jill Stein and the Green Party. It was unclear how Bernie Sanders could possibly win. Let alone how Jill Stein could win. But Bernie and Jill were against drones, banks and GMOs while Hillary Clinton was for them. And the mood grew uglier as the temperature approached one hundred degrees.

The crazier elements had converged around the historic Arch Street United Methodist Church which was “training” activists to protest non-violently. There were illegal aliens in green t-shirts laughing uproariously and scowling elderly Trotsky fan club members wearing BDS buttons surrounded by posters denouncing America for its “ongoing war” in Iraq (against ISIS) not to mention Syria, Yemen, Somalia, Pakistan and most of the rest of the world. The Revolutionary Communist party marched angrily past.

There were also “Bernie Peacekeepers” wearing plastic placards proclaiming that they do not support violence of any kind. If anyone doubted their seriousness, the placards had a rainbow peace sign.

But the core Bernie elements had gathered around City Hall. They had marched the day before when there was no convention. And they were going to march today. A giant banner denounced the “racist drug war”. The ragged crowd carrying it had clearly found themselves on the wrong end of that war. Younger fans wore Bernie t-shirts. Entire families with dreadlocks held up handmade signs.

There was something millenarian and apocalyptic about the scene. Everyone knew that Bernie was going to announce that the revolution was over. And no one wanted to go home.

Officially the Democrats were here to coronate Hillary. MSNBC had set up a giant stage outside the Independence Visitor Center where tickets were being distributed to Independence Hall and its recreations of the rooms where the Declaration of Independence and the Constitution were signed. MSNBC personalities leered at viewers from giant video monitors and NBC staffers had swamped the Independence Hall bathrooms. But on the ground, it was all Bernie, Bernie and more Bernie.

There were no Hillary shirts in the streets. It was all Bernie. Silhouettes of Bernie’s glasses, Bernie and his bird, Bernie as a strapping young socialist and Bernie speaking to the masses. He was their Stalin or Saddam. His image was on shirts, signs and banners. Meanwhile elderly DNC delegates wearing blue lanyards nervously shuttled between bars eagerly catering to delegates. The painted donkeys in the squares, a tired gimmick, mostly went ignored. Even an “I’m With Her” button was a rarity.

In a hushed voice, a DNC delegate told me that it was important to elect someone in the middle. But the message in the streets was dramatically different. It wasn’t even about Bernie anymore. Bernie Sanders had tried to address his supporters asking them to behave and they had booed him. And that made the booing of Hillary’s name at the convention inevitable. Bernie the politician had sold out. But the radical left had already created Bernie the character who would go on fighting even when the politician wouldn’t. Bernie could start the revolution. But he couldn’t stop it. Because it was never
about him. 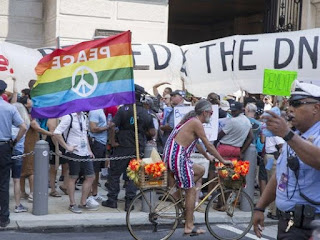 The most extreme Sandernistas had converged on Philly certain that they would win. And for all of Hillary’s elaborate organization, her networks of influential cronies, she couldn’t stop them from ruining her coronation. The DNC was on the run. Debbie Wasserman Schultz had resigned. And DNC delegates were outnumbered by angry radical leftists waving signs denouncing capitalism.

The radical left was trying to devour the Democratic Party ahead of schedule. And it wasn’t a pleasant sight. Sandernistas crowded the 30th Street Train Station holding forth on a rigged election. They had arrived on stuffy Amtrak trains clutching wadded up cardboard signs. There were angry grad students down from Yale upset about income inequality and anti-war activists from New York City toting models of drones and photos of crying children. Meanwhile the temperature kept on climbing.

Philly was an oven. The locals apologized for the weather as if they had somehow caused it. But the sullen unforgiving heat seemed to echo the mood of Sanders supporters. The hotter it got, the louder and crazier the chants became. At the heart of what was supposed to be a celebration of Hillary, a passionate portion of her party’s base was demanding that she be sent to jail. It was a secret wish that Bernie Sanders had been forced to swallow and abandon, but his supporters had not forgotten. And they would not forget.

Even before Bernie Sanders could sell out his followers at the DNC, the rising tension reached a crescendo and broke. The heat that had been growing all day could continue no more. Torrents of rain gushed down from the sky. Lightning flashed past skyscraper scaffolding and thunder boomed louder than the loudspeakers. Furious gusts of wind blew rain past a handful of umbrellas that had been used as parasols against the sun. The MSNBC stage was quickly deserted. And the Sandernistas, like drowned rats, raised up their cardboard signs as makeshift umbrellas against the rain.

Hours later, the final betrayal took hold. Bernie Sanders spoke at the DNC and sold out his loyalists. But they too had been preparing for the end.

More than one Sandernista spoke wistfully to me of Jill Stein and the Green Party. One leftist messiah had failed them. Bernie Sanders had put the Democratic Party ahead of the radical left’s agenda. But there were always uncompromising leftist radicals who would never be practical no matter what. 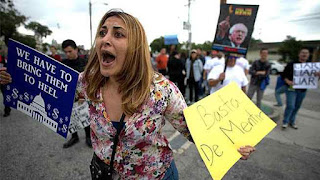 Sanders’ own supporters booed him. They booed any mention of Hillary. And they rode Amtrak home clutching wet signs calling for socialized medicine and an end to capitalism. Whether it is the Soviet Union or the Sanders Union, the left never recognizes that its revolutions have failed. It never learns anything from history except how to hate harder.

The Democratic Party had allowed the left to take over. And the left has no sensible stopping point. It is an endless cycle of revolutions, of mad political agendas and madder personalities that will not stop. Leftists like Hillary Clinton and Bernie Sanders unleash revolutions that they cannot control.

That is what always happens to the left. It is what happened at Berniegeddon in Philadelphia.

The Bernie dream is dead, but the dream of a totalitarian revolution of the left lives on. Next to the great historical monuments of America, the Liberty Bell and Independence Hall, Benjamin Franklin’s grave and the Tomb of the Unknown Revolutionary War Soldier, the left vented its hatred for this country and its desire to erase its existence and its freedoms from the earth.