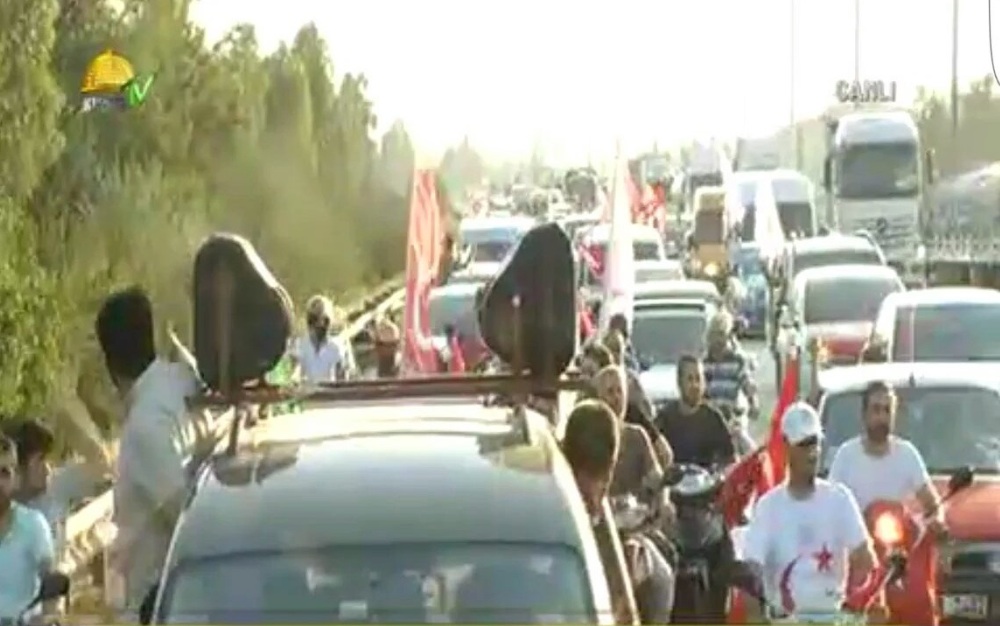 What you see on the news from Turkey are protesters shouting anti-American and anti-Israel slogans, but what most are not seeing are the miles of long convoys headed towards the Incirlik base, where U.S. Air Force is stationed, to stage a massive rally against the U.S.

Here is one photo:

The U.S., just shortly before the coup on July 15th, knew that trouble was brewing and sent home all families of servicemen on the base. The air base, which is used by NATO and stores US tactical nuclear weapons, was invaded by Erdogan’s militia two weeks ago when they entered the base in southern Turkey, claiming that an investigation is connected with the coup attempt were electric power supply to the base was cut off, forcing the US military to switch to its own internal power supply in order to resume its anti-terrorist campaign in the region.

In summary, anti American sentiments are growing in Turkey and the population is reflecting to its past Islamist attempts to change that nation. Now that its Muslim Brotherhood real coup was a success after July 15th failed coup, we are beginning to see the rise of the Muslim storm.

This storm, which many mocked saying it “was dead,” especially after the Muslim Brotherhood failed in Egypt.

Now the Muslim flood of this red dragon wants to stop the U.S. from attacking Turkey’s baby, ISIS, calling for the closure of the base shouting “shut down Incirlik.”

Sending convoys to where U.S. is stationed at Incirlik is becoming the style. Here is a young child with a toy truck going to face the U.S. at the base alongside the heavy convoy going there in accordance to the Quranic mandate for jihad “infiru khifafan wa-thiqala” (flood [for Jihad] light weight (young) and heavy weight”:

Blaming the U.S. has skyrocketed in Turkey under the Obama Administration. Is Obama giving the base as a farewell gift to Erdogan, along with hydrogen-bomb tactical nukes?

A pro-Erdogan Turkish scholar has said that many people in Turkey believe the United States is behind the July 15 coup attempt because the head of the parallel state, Fetullah Gulen, lives in the country, despite repeated requests for his extradition by Turkish authorities.

In an article published Wednesday in the Daily Sabah, an English-language newspaper based in Turkey, university lecturer and former EU minister Beril Dedeoglu said that in the history of coups in Turkey, the U.S. has always taken the side of the coup plotters.

In summary, Erdogan wants to be the tyrant Alp Arslan and Saladin who conquered Jerusalem and is why they burn Israeli flags. He wants to be all in all. He wants to “declare war on the strongest fortresses” (the US) to “advance his foreign God,” Allah, through warfare as Daniel predicted.

Years ago, it was unthinkable to believe that Turkey would turn on the U.S. What we see here is just the spark before the coming storm. We urge all Christians (especially Jews, Greeks, and Armenians) to leave Turkey before its too late.