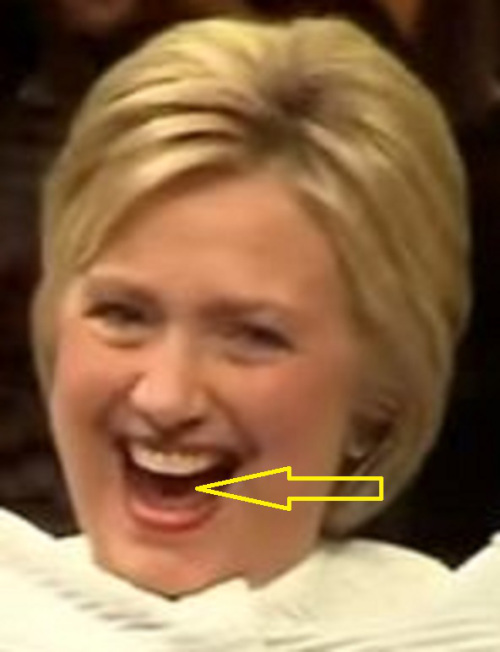 The latest indicator that all is not well with her health may be the most disturbing.

Below is a PBS news video of Hillary’s acceptance speech on Thursday night, July 28, 2016. Pay special attention to the beginning of the video when Hillary was drinking in the crowd’s adulation, smiling with her mouth wide open.

Notice any thing odd about her tongue?

Here are two enlarged images of her mouth from the two screenshots above. I painted the yellow arrows pointing to a dark spot on her tongue:

Soon after her acceptance speech, the Twitter-verse exploded with tweets of close-ups of Hillary’s mouth (see below), with the tag “Hillary’s tongue”.

Is the hole in Hillary’s tongue from removing a stud, or is it from cancer surgery? According to the blog Lame Cherry:

“the only way one has one of these is that a physician has cut out a huge growth on the tongue, and the only reason one cuts out this huge of a growth on a tongue, is it is cancer.

The characteristics of these two cancers are quite distinct, and reflect the differences in their origins. The difference in origins is also the reason that the treatment of these two forms of tongue cancer is quite different. Oral cancers are relatively rare, representing only about three percent of all cancers.

This is what the Mayo Clinic says about tongue cancer:

Tongue cancer can occur…[i]n the throat, at the base of the tongue, where tongue cancer may develop with few signs and symptoms (hypopharyngeal tongue cancer). Base of tongue cancer is usually diagnosed at an advanced stage, when the tumor is larger and the cancer has spread into the lymph nodes in the neck.

Increasingly, base of tongue cancers are associated with human papillomavirus (HPV), which has a profound effect on the prognosis and treatment of the cancer.

From the CDC (Centers for Disease Control and Prevention):

HPV is short for human papillomavirus.

HPV is a group of more than 150 related viruses. Each HPV virus in this large group is given a number which is called its HPV type. HPV is named for the warts (papillomas) some HPV types can cause. Some other HPV types can lead to cancer, especially cervical cancer….

HPV can cause cervical and other cancers cancers including cancer of the vulva, vagina, penis, or anus. It can also cause cancer in the back of the throat, including the base of the tongue and tonsils

Presidential candidates are required to disclose their medical history. But in Obama’s case, during the 2008 campaign, he released only summary medical information from his personal physician, who pronounced him to be in “excellent health”.

We should demand that Hillary releases a full and detailed medical report, but I don’t expect she will comply. Afterall, she has already demonstrated that rules and laws don’t apply to her.