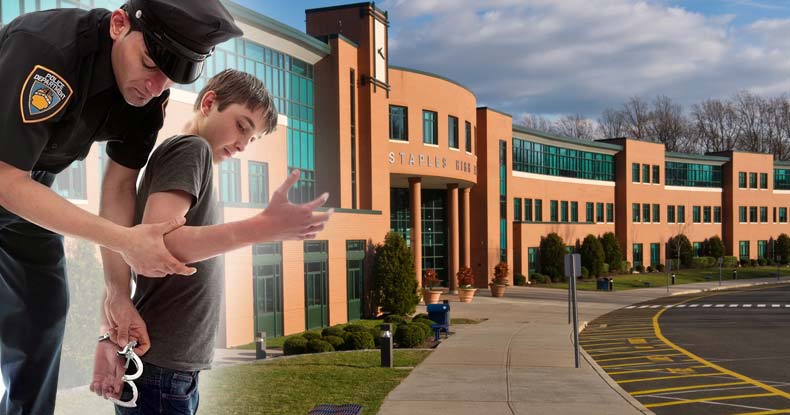 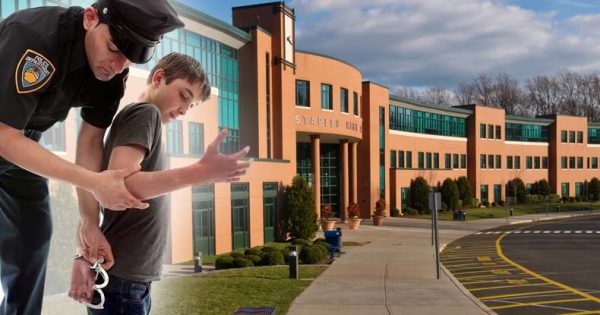 Albuquerque, NM — Albuquerque, New Mexico is home to some of the world’s most dangerous cops. After a recent federal appeals court ruling this week, the world now knows why they are likely never held accountable. In typical police state fashion, the court upheld the arrest and charges of a 13-year-old child — for burping in class.

In what sounds like a piece from the Onion, the 10th circuit court of appeals ruled that the cop who arrested the child and the school staff were entitled to ‘immunity’ from any lawsuit filed against them on behalf of the child. The law the court cited in their ruling prohibits anyone from interfering with the educational process.

The original incident happened in May of 2011 at Albuquerque’s Cleveland Middle School. After repeatedly burping in class, instead of simply disciplining the child, the school called the cops. The 13-year-old boy, who was in 7th grade at the time, was then searched, arrested, handcuffed, and brought to jail — for burping.

After being held in a juvenile detention center for over an hour, his mother was finally informed that her son had been arrested.

The boy’s mother filed a lawsuit rightfully arguing that her her son’s arrest was unlawful and resulted in excessive force. However, thanks to the insanity of the legal system, she has no recourse against the school officials or the cop who kidnapped her son for burping.

“At worst, [the boy] was being a class-clown and engaged in behavior that would have subjected generations of school boys to an after-school detention, writing lines, or a call to his parents,” a complaint filed by her attorneys said. However, instead of using these normal means of discipline, the school opted for the barrel of a gun.

According to the school, the boy was in physical education class when his teacher said he began making other students laugh with fake burps. The teacher sent him to the hallway, where he continued burping and leaning into the entranceway to the classroom so the students could hear.

That’s when officer Arthur Acosta, assigned to the middle school as its resource officer, was called to the hallway where the boy was seated, according to court documents.

The boy disputed the version of events provided to the officer by his teacher, Margaret Mines-Hornbeck, before the officer led him away from the classroom, and took him first to the school’s administrative office and then the juvenile detention center.

After being arrested, the child was then suspended for the remainder of the school year.

The court also ruled on a separate complaint brought against the school for their decision to search the boy the following November, after the arrest.

According to court documents, the assistant principal suspected the child was involved in a marijuana deal and made the boy remove his shoes and jeans, and flip the waistband of his shorts outward. The search was fruitless and revealed that the principal’s suspicions were false.

According to the Guardian, the mother argued the school official engaged in an unlawful strip search of the boy. But the court found the use of the term “strip search” was a stretch and did not violate the boy’s constitutional rights.

When a child is arrested for being the class clown and a court not only upholds the arrest but grants immunity to the ones who conducted it, something is seriously wrong.

Kidnapping and caging a child for burping shows that the mere act of being a child is now criminalized.

As the Free Thought Project previously reported, according to statistics released by the U.S. Department of Education and published by NBC News, in the 2011-2012 school year, teachers called the cops on students a total of 31,961 times in the state of California alone, leading to 6,341 arrests.

With 175 school days lasting eight hours each, that means that every 2.6 seconds a cop is called!

At one California school district, in particular, East Side Union High School District in San Jose, police were called on students 1,745 times during the 2011-2012 school year. This one school called the police on students more than ten times a day!

In May, we reported on the video showing a San Antonio Independent School District police officer body slam a 12-year-old girl. In February, the Free Thought Project brought you the story of the Baltimore School cop who was seen beating a student who had done nothing wrong.

In fact, recent videos have revealed a myriad of school cops attacking unarmed students. In December, Officer Rigo Valles was cleared of any wrongdoing after grabbing a student by the neck and slamming him to the floor. In October, Richland County Deputy Ben Fields was fired after students recorded him flipping over a girl’s desk and dragging her across the floor. Oklahoma City Master Sgt. Thomas Jaha was charged with assault and battery in October as well, after repeatedly punching a student in the face for not having a hall pass.

And these are the ones the public knows about. How many more incidents, just like this one, go unreported and unpunished?

Instead of attempting to solve a problem with logic and reason, schools are now taking the easy road and turning to the barrel of a gun to force compliance. This is not only dangerous and lazy, but entirely unnecessary.

A study of more than 185,000 private and public school users from 2010 to 2014 revealed that violence is largely a problem in the public school sector. Private schools, unlike public schools, have an incentive to create a safe and caring environment for their students, so they take a far more proactive approach to prevent bullying — and it works.

Without using police force, private schools are able to reduce bullying and violence to levels far below that of public schools. Imagine that.

If you truly want a glimpse into the horrid effects of the police state on all school children, take a scroll through our archives, at this link.

Until people wake up to the reality of relying on a system of violence to maintain “order,” we can expect this problem to get worse.