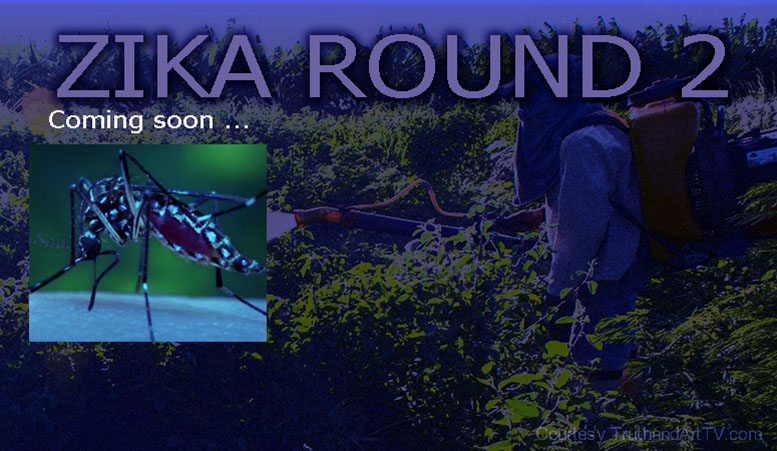 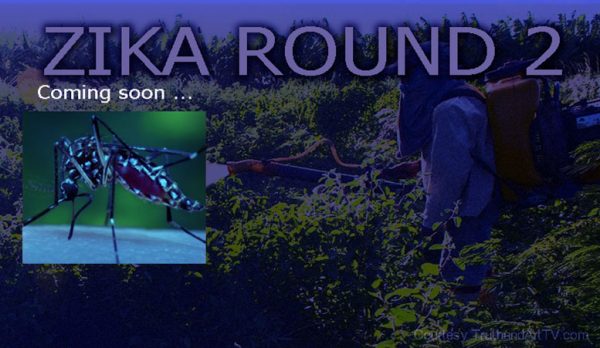 There are many tools that the Western cabal resorts to in order to deceive and enslave us as the year goes by. The list is endless and we all know many of these items. Terrorism, ISIS, global warming, scarcity, rumors of WW3, claims that China, Russia or North Korea is the bogeymonster or Iran is going to nuke the world. Another one is the medical disease psyop scare like Ebola and now Zika virus. Pushing their medical disease scare is a powerful tool for them to impose things like quarantines, lock-downs, round-ups, mandatory vaccinations, depopulation and much more.

Judging from a recent mainstream media article it appears they are slowly stirring up the pot for a possible upcoming Zika virus scare round 2. In this brewing second round of the coming Zika virus psyop scare they are now transporting the Zika virus (which is falsely being portrayed as teratogenic or a primary cause of birth defects) to the Florida region of the United States. I believe this could be the early stages of an upcoming psyop event likely to be staged later this summer or in the fall. Notice they always set up the story first.

Recall the early ISIS beheading videos set the stage for the ISIS entrance onto the global stage. Before you can roll out a major Zika virus vector-related psyop scare in the US (round 2), you have to transport the virus here to the US first and then show how it’s already spreading via mosquitoes. I believe introducing the vector-related narrative is one of the main purposes of this story as this provides the needed backdrop for a potential future claims of “rapid disease spreading” due to “local mosquitoes.”

Florida Gov. Rick Scott said Friday that four people infected with Zika in South Florida likely contracted the virus from local mosquitoes, marking the first time the disease has been transmitted by the bugs in the continental U.S.

More than 1,650 Zika infections have been reported in the U.S., but until now all were linked to travel to areas with outbreaks of the virus. Zika, which can cause devastating birth defects, is spreading rapidly in more than 30 countries and territories in the Caribbean and Latin America.

The four new cases in Florida were found in one woman and three men in Miami-Dade and Broward counties, Scott said at a news conference in Orlando. No mosquitoes in the state have tested positive for Zika, he added.

If you are not familiar with round 1 then familiarize yourself with the storyline from last year (2015) where Brazilian “medical authorities” suddenly claimed that some 4780 babies were born with microcephaly (small heads). Without any evidence whatsoever these cases were then said to be directly due to Zika virus which is an entirely improbable and unsubstantiated claim since Zika virus was first officially identified in 1952 (a search that started in 1947) and it is not associated with life-threatening or infectious (or pathogenic) disease in humans according to the medical literature. To date there are no known cases or any genuine scientific studies proving a direct link between Zika virus and any deformities including microcephaly. All we have is repeated unscientific and unproven claims by “authorities” with a clear agenda. As I’ve said many times before, viruses don’t suddenly start behaving radically different from how they have behaved in the past. In other words, barring highly unusual and unique changes in the environment or circumstances, the virus engages with its environment in a consistent manner. The idea that a virus would suddenly change its own characteristics almost overnight is more radical than most of us realize.

Although a causal link between Zika infection in pregnancy and microcephaly has not, and I must emphasize, has not been established, the circumstantial evidence is suggestive and extremely worrisome.

The “circumstantial evidence” Chan was speaking of was also later debunked when doctors in Brazil revealed that the actual number of cases of microcephaly was about 404; and in several documented reports it is concluded that a sizable percentage of these microcephaly cases have come from the northern section of Brazil, specifically Pernambuco, which has been notoriously known for their very intense spraying of dangerous pesticides.

As Dr Janette D. Sherman writes regarding the link between pesticides and birth defects.

Birth defects arise as a result of two mechanisms – damage to a gene, prior to fertilization, or damage to the growing cells of the fetus after life in the womb has begun. Differing from genetic damage, such as occurs in Down syndrome or Trisomy-21, the latter damage results from exposure of the developing fetus to agents called teratogens. For many years Mongolism was the name applied to children with growth delays, similar facial and hand features and intellectual deficits.

Chlorpyrifos is a unique pesticide. It is a combination of an organophosphate and a trichlorinatedpyridinol (TCP.) TCP is not only the feedstock used in the manufacture of chlorpyrifos, but also a contaminant in the product, and a metabolic breakdown product that is known to cause central nervous system abnormalities (hydrocephaly and dilated brain ventricles), and other abnormalities (cleft palate, skull and vertebral abnormalities) in fetuses as reported by Dow Chemical Co.

So pesticides and birth defects clearly go together and the teratogenic effects of pesticides (like glyphosate-based herbicides) can be seen here.

If there is one thing we should all be clear about by now, it’s that the Western cabal’s ruling elite who are attempting to form their global order don’t ever feel the need to make sense or make claims that stay withing the realm of reason and evidence-based science. The Zika virus lies and deceit is no different.

Not only are the ruling elite claiming a phony link between Zika virus and microcephaly as they attempt to reverse decades of literature showing that Zika virus is entirely benign, but they are now building on this psyop as I have discussed often in the past. They have been using the Zika virus psyop to push for birth control (think depopulation), a move even the Pope got involved in last year (2015), and they are also using this new psyop to push for a “global command medical center” where I’m sure they’ll be hoping to enforce mandatory “vaccination” against Zika virus if they could ever get the vaccine “approved.”

This is where we are headed. Unfortunately Zika virus (or Ebola or whatever psyop virus or disease “problem” they can come up with) is yet another card the ruling elite can play against humanity to further enslave us, and we should be expecting this card to play out at some point in the future. Remember, they didn’t role out Zika virus in 2015 for no reason.

What I like to do is to expose what I call the “preview” or a “setup” stories that the mainstream media rolls out often months before they go with a certain psyop. This is a classic example of a preview or setup story for the bigger one coming later. Let’s not be fooled when they roll out the main story. Instead let’s remain vigilant and educated about the topics beforehand.