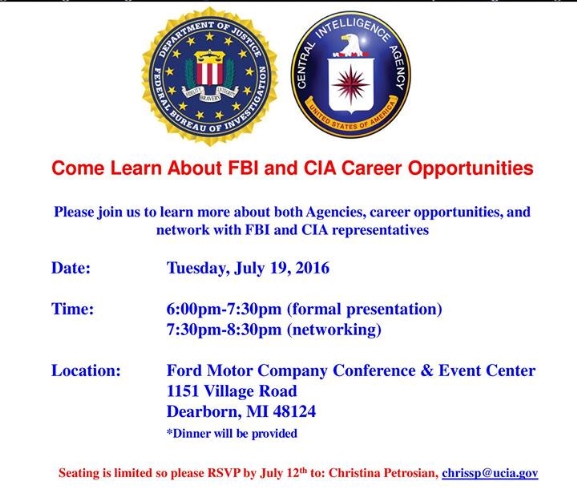 Do you recall when the Federal Bureau of Investigation scrubbed any and all references of Sharia, Islam and jihad from their counter terrorism training manuals? Well, now the FBI and the CIA, headed by a Muslim convert named John Brennan, are in the most Muslim city in America and they are seeking to recruit for their agencies.

A career fair was held on July 19 in Dearborn, Michigan by the FBI and the CIA, which promoted career opportunities.

The notice was posted on the Arab-American Chamber of Commerce Facebook page and also in local news publicans.

Among the publications advertising, The Press and Guide issued this public notice:

“Learn about working for two top government agencies during an informational session being held by The Central Intelligence Agency and Federal Bureau of Investigation.

“Attendees will learn about both agencies and have the chance to hear about career opportunities as well as network with CIA and FBI representatives.

“Both the FBI and CIA are seeking to increase diversity within the organizations and find specifically skilled applicants to fulfill critical roles within the agencies.

“Those at the event will hear about specific job positions and qualifications through a panel discussion as well as the agencies’ similarities, strategic differences and shared commitment to thwart threats to national security.

“Dinner will be provided, but seating is limited. RSVP by July 12 to Christina Petrosian at [email protected].”

It does make you wonder how the two agencies are supposed to properly vet Muslims for “increased diversity” when they are not allowed to speak about Islam, Sharia or jihad.

Also, consider that ‘Muslim Advocates’ president, who managed to get all references to jihad, Muslim, and Islam purged from the 9/11 Commission Report and FBI training manuals, because she considered them bigoted, was unable to give Ted Cruz an answer when it comes to Islamic terrorism in America.

Additionally, Homeland Security Secretary Jeh Johnson, who claimed it is his job to give voice to the plight of the Muslims, also refused to give answer to the people of the united States when asked about training manuals being purged of Islam specific material.

Instead of calling things what they are, namely “Islamic terrorism,” the Obama administration has sought to redefine it generically to “violent extremism.” Of course, at the top of their list are people who are Evangelical Christians.

Yet, keep in mind that this is the same FBI and CIA that know there are at least 22 Islamic terror training camps operating in the united States. Does anyone actually think these agencies are capable of recruiting and vetting applicants from Dearborn? Perhaps the better question might be, what are they actually recruiting them for? The next patsy, so that more tyranny and infringement of the rights of the people can be put forward? That would be my guess.