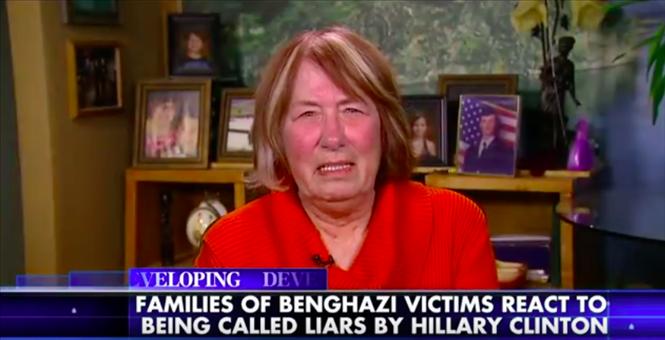 “I don’t hold any ill feeling” towards family members who “may not fully recall everything that was or wasn’t said,” Clinton told Chris Wallace in an interview a few days ago.

So now Hillary is alluding that Pat just has a bad memory of Hillary placing the blame for Benghazi on a YouTube video… And since we know Queen Hillary doesn’t do interviews without pre-screening all the questions, the only reason one can surmise as to why this question was asked was to give Hillary a chance to show her supposed “human side” by pretending to know what sympathy and empathy are… All of which entirely failed because A) she’s a terrible actress and comes off as completely fake, spewing words which do not have any emotion behind them and B) it just looks like she’s trying to weasel out of blaming Benghazi on a video, something which she did with a straight face multiple times and something which was long ago debunked as a total falsehood.

Well, that’s okay Hillary, because we have a video of you standing on the tarmac next to a coffin with Pat Smith’s son’s dead body in it while blaming his death on a video right here… How could anyone forget?