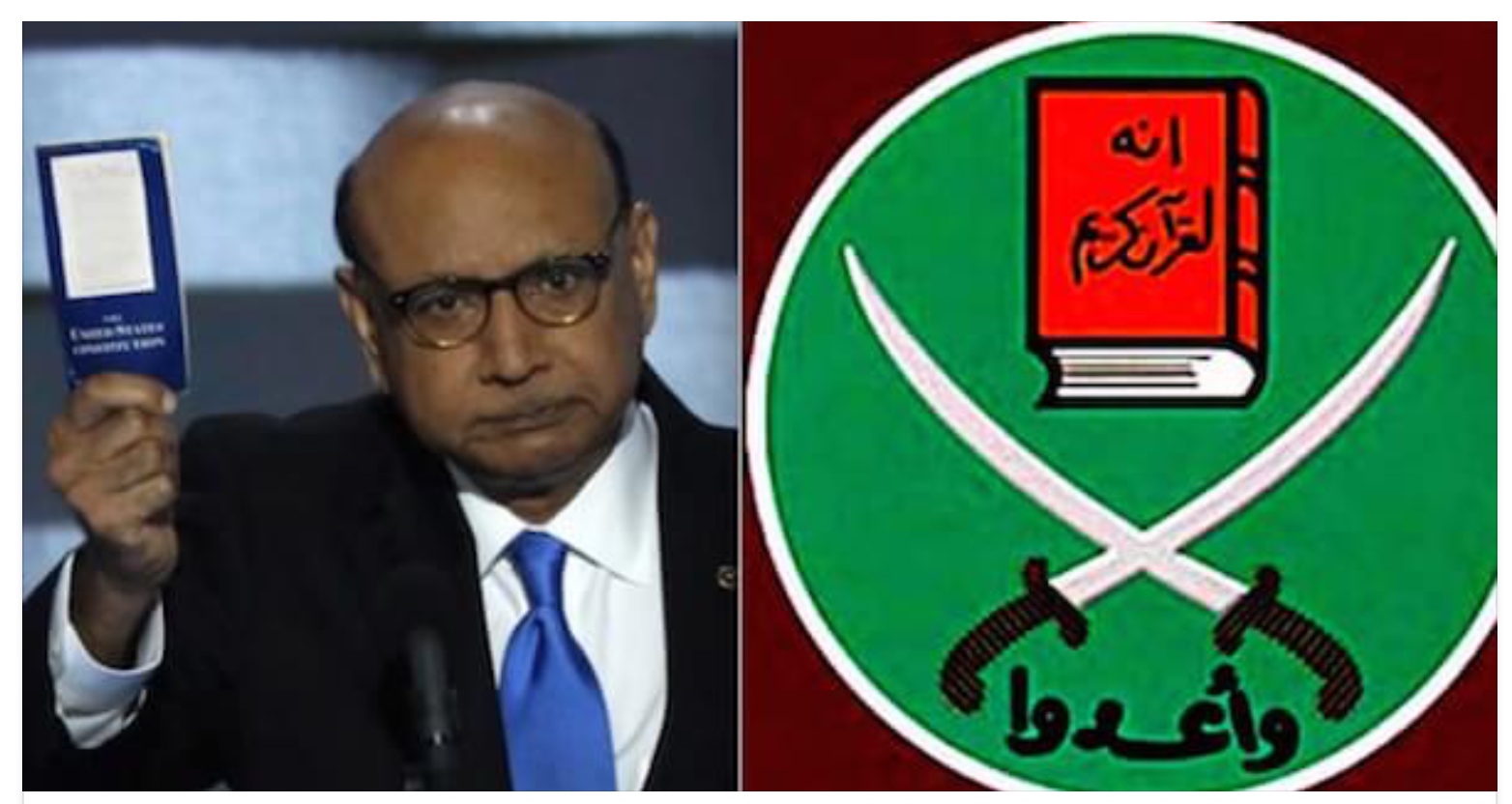 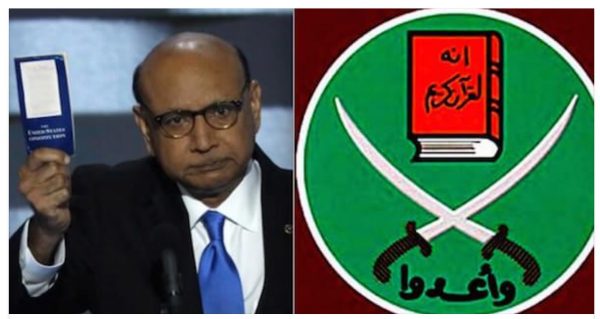 The Muslim who attacked Donald Trump, Khizr Muazzam Khan, is a Muslim Brotherhood agent, working to bring Muslims into the United States. After reading what we discovered so far, it becomes obvious that Khan wanted to ‘trump’ Trump’s Muslim immigration policy of limiting Muslim immigration into the U.S.

But not so fast. Trump we have your back.

But more than this, Khan is a promoter of Islamic Sharia Law in the U.S. He was a co-founder of the Journal of Contemporary Issues in Muslim Law (Islamic Sharia). Khan’s fascination with Islamic Sharia stems from his life in Saudi Arabia. During the eighties Khan wrote a paper titled Juristic Classification of Islamic [Sharia] Law. In it he elucidated on the system of Sharia law expressing his reverence for “The Sunnah [the works of Muhammad] — authentic tradition of the Prophet Muhammad (Peace be upon him).” A snapshot of his essay can be seen here:

But Khan’s fascination with Islam isn’t the only issue. What is more worrisome is that at the bottom of the intro, Khan shows his appreciation and the source of his work and gives credit to an icon of the Muslim Brotherhood:

“The contribution to this article of S. Ramadan’s writing is greatly acknowledged.”

This alone speaks volumes. Khan used the works of S. Ramadan to lay his foundation for his inspiration regarding the promotion of Sharia. S. Ramadan is Said Ramadan, head of the Islamic Center in Geneva and a major icon of the Muslim Brotherhood, the grandson of Hassan Al-Banna the founder and hero of the Muslim Brotherhood which spread terrorism throughout the world.

While we did not read Khan’s book (they charge and we do not want to support this evil agenda) it becomes crucial to mention more on Khan’s icon and who Said Ramadan was.

Ramadan was a writer who wrote material for the Muslim Youth Movement of Malaysia, an organization that has been promoting Islamic revivalism and indoctrination to recruit young people in Malaysia to jihadism. It is actually a Malaysian branch of the Egyptian Muslim Brotherhood. Khan’s fascination for Muslim Brotherhood icon and Islamic Sharia stems from Ramadan’s book Islamic Law: Its Scope and Equity, which Khan gleaned from to do his work giving credit to Ramadan. A version of it was published for the Malaysian Muslim Youth Movement (a branch of WAMY):

WAMY is the World Association of Muslim Youth which was created through the collaboration of the Wahhabist and Muslim Brotherhood led by Said Ramadan who was, again, the son-in-law of Hassan al-Banna, the founder of the Muslim Brotherhood including Ahmad Bahefzallah, the boss of Huma Abedin (Hillary Clinton’s aid) and her parents Sayed Z. Abedin (father) and Saleha Mahmoud Abedin (mother). It was also financed by the wealthy Abdullah Omar Naseef, another boss of the Abedin family who was an Al-Qaeda financier.

Again, Khan wrote his Sharia Law supporting work in the eighties while he was in Saudi Arabia, the motherland of Wahhabism. This would never be possible unless Khan clearly had the support of the Saudi Wahhabist religious institution. We took a snapshot of the text:

While there is so much to glean from his work, time is of the essence, but Khan’s travel according to a recent report, he moved from Pakistan to the United Arab Emirates, a hotbed for the Muslim Brotherhood. Currently he runs a law firm in New York City calledKM Khan Law Office. According to the website, the the law firm specializes in “immigration services” to bring Muslims into the U.S., which presents a clash with Trump’s suggested policy to limit Muslim immigration into the U.S.

To understand the inception of Muslim immigration one must study the Muslim Minority Affairs, a paradigm and an Islamic jurisprudence created by Saudi Arabia which sparked during the times Khan lived in Saudi Arabia while collaborating with the Saudi kingdom.

Khan needs further study and analysis to see how his connect with Hillary Clinton’s campaign since he serves the interest of Muslim oil companies as well as Muslim immigration into the U.S. Intelius reveals Khizr M. Khan used to work for Hogan & Hartson and Lovells, which has ties to the Clinton Foundation:

“Hogan Lovells LLP, another U.S. firm hired by the Saudis, is registered to work for the Royal Embassy of Saudi Arabia through 2016, disclosures show. Robert Kyle, a lobbyist from the firm, has bundled $50,850 for Clinton’s campaign”

“Many lawyers at Hogan Lovells remember the week in 2004 when U.S. Army Capt. Humayun Khan lost his life to a suicide bomber. Then-Hogan & Hartson attorneys mourned the death because the soldier’s father, Khizr Khan, a Muslim American immigrant, was among their beloved colleagues”

Saudi interests with using Khan to advance Muslim immigration and advance Muslim Sharia is a lengthy subject which has ties to Hillary Clinton’s aid Huma Abedin as well. It will take hours of reading just to cover this topic on how it was The House of Saud’s “Muslim Minority Affairs” and the Abedins (Huma Abedin and family) that played a central role in using Muslim immigration to infiltrate the west with Wahhbi agenda. The House of Saud had used Huma’s father Sayed Zaynul Abedin’s work regarding the Muslim Minority Affairs in the West, published in 1998 as part of 29 works to construct a plan to conquer the U.S. with Islam. It is obvious that Khan is upset, that a Trump victory will eliminate and destroy decades of hard work to bring in Islamic immigration into the United States which was spearheaded by agents in Saudi Arabia like Khan and Huma Abedin and family (Sayed Z. Abedin) which we translated excerpts from his work.

You can study this here which includes links, evidences, photocopies, history … everything

In regards to his son and his sacrifice, on the other side of the coin, many were the ‘Muslim martyrs’ who joined the US military. Ali Abdul Saoud Mohamed, for example, enlisted in the Special Forces of the US Army; he was a double agent for Al-Qaeda. How about Hasan K. Akbar, a Muslim American soldier who murdered and injured fifteen soldiers. There was Bowe Bergdahl, an American Muslim soldier who deserted his men to join the Taliban, a desertion which led to six American being ambushed and killed while they were on the search looking for him. And of course the example of Nidal Malik Hassan, who murdered fourteen Americans in cold blood in Fort Hood. What about infiltration into the U.S. military like Taha Jaber Al-Alwani, a major Muslim thinker for theMuslim Minority Affairs, an icon of the Abedin family (Hillary’s aid Human) who, while he served in U.S. military, called on arming Muslims to fight the U.S? Al-Alwani is an IMMA (Institute of Muslims Minority Affairs) favorite, Taha Jaber al-Alwani, whom the Abedins say is the source for their doctrine (see Abedins-Mein-Kampf) is an ardent anti-Semitewho by the way, runs the United States Department of Defense program (out of all places) for training Muslim military chaplains in the U.S. military.

We translated some of his quotes on the issue of The Muslim Minority Affairs:

“… it [MMA, Muslim Minority Affairs] is a Jurisprudence for a group confned to its special circumstances which is allowed what others are not. Its exercise needs an understanding of social sciences, especially sociology, economics, political science and international relations… for the fundamentals of success for the Muslim Minority Jurisprudence it must adhere to the collective earth concept.” [link from Arabic here]

Alwani, a man commissioned by our government, even calls for a soon-to-be military conquest and provides an offcial fatwa in preparation for the use of force:

“Commitment to the Quranic concept of Geography: The land belongs to Allah, his religion is Islam, and every country is already in the House of Islam—now in the present time—since they will be in the House of Islam by force in the near future. The whole of humanity is a Muslim Nation: it is either ‘the religion of the nation’ which has embraced this religion [Islam], or a ‘proselyte nation’ we are obliged to conquer.” (Alwani, The Jurisprudence of Muslim Minority Affairs. No. 7, translated from Arabic by Shoebat.com)

What part of “they will be in the House of Islam by force in the near future” don’t these democrats understand? More dead Americans?

Even the Abedins’ Journal for Muslim Minority Affairs (JMMA ) confrms that their program stems from these same extremist sources:

“The theory of the Jurisprudence of Muslim Minorities is most easily clarifed by shedding light on its founders” which the notes state are none other than Muslim Brotherhood “Yusuf al-Qaradawi” and “Taha Jabir al-Alwani”.

In a nutshell, The Muslim Minority Affairs program is part of a grand plan to destroy America from within, exactly as what the Muslim Brotherhood planned, which was exposed in the HLF trial.

I can go on and on. These Muslim soldiers were “heroes” of course, until the snow melted later on. Is it likely that Khan’s son was killed before the snow melted? Only another type of investigation will determine that. Do they ever mention how many soldiers have died because of Muslim traitors? Do they ever bring up how many Christians in the US military were killed? Yet the modernists and homosexuals continue to attack Christians. But soon everything we need to know will be uncovered as a Middle Eastern proverb says: the snow always melts and the sh*t under it will soon be revealed.