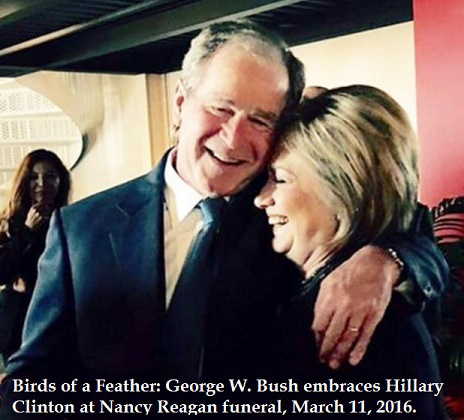 Whatever happens on November 8, Donald Trump can claim this achievement: His candidacy exposed the fact that the two-party system of Democrats and Republicans is an illusion.

What we have in the U.S. instead is a corrupt polity where Democrat and Republican élites form a single ruling party, as Professor Emeritus Angelo M. Codevilla stunningly asserted in 2010. (See “America’s Bipartisan Ruling Class vs. the People“)

The following list of Republican bigwigs who, by publicly declaring their support for Hillary Clinton — the pathological liar who had accomplished nothing as secretary of state, but violated U.S. laws and jeopardized national security with her unsecured private email server; lied about and left four Americans to die in Benghazi; and supports the absolute “right” of women to kill their unborn — instead of Republican Party presidential nominee Donald Trump, have peeled away their masks, revealing their true faces.

Here’s a list of the Republican élites who have declared they’ll vote for Hillary:

Add to the above list Glenn Beck, the billionaire Koch brothers, Bill Kristol (National Review), Mitt Romney, Karl Rove, and Ben Shapiro (National Review), who, although not declaring they’ll vote for Hillary, are reported to be adamantly opposed to Trump.

Here are the Republicans who will vote for the Libertarian Party’s Johnson-Weld ticket and so effectively assure a Hillary win:

As The Daily Bell observes:

There is only one party: pro-war and pro-technocratic (corporatist).

The fundamental mythology of US politics is that the Democrats are socialist-oriented and Republicans believe in freedom and individual human rights.

But Hillary is corporatist, not socialist….

Strangely, Hillary’s actions and statements provide evidence of the very authoritarianism and brutality that Trump is being accused of.

When she and her husband entered the White House, one of the very first things Hillary did was fire the staff of the travel office in order to put her own people in place.

She didn’t just fire the staff however, she also tried to get the head of the office, Director Billy Dale, put in jail for embezzlement. He was subsequently found not guilty and Hillary herself was investigated for initiating the firings and making false accusations.

Her intimidation and blackmailing of her husband’s lovers is well known by this point- and thus her campaign’s emphasis on “women’s rights” is ironic to say the least.

Her voting record and statements reveal an individual who is most comfortable with US serial wars abroad, no matter the reason (or lack of reasons).

Additional accusations against Hillary and her husband include violence and even murder of individuals whose interests diverged from theirs.

Most notably, Hillary has been accused of orchestrating the death of Deputy White House Counsel Vince Foster.

None of this seems to register with Republicans who are “crossing over”….

Conclusion: Whatever else takes place during this federal election, the disintegration of the credibility of the two-party system is perhaps the most important development of all.