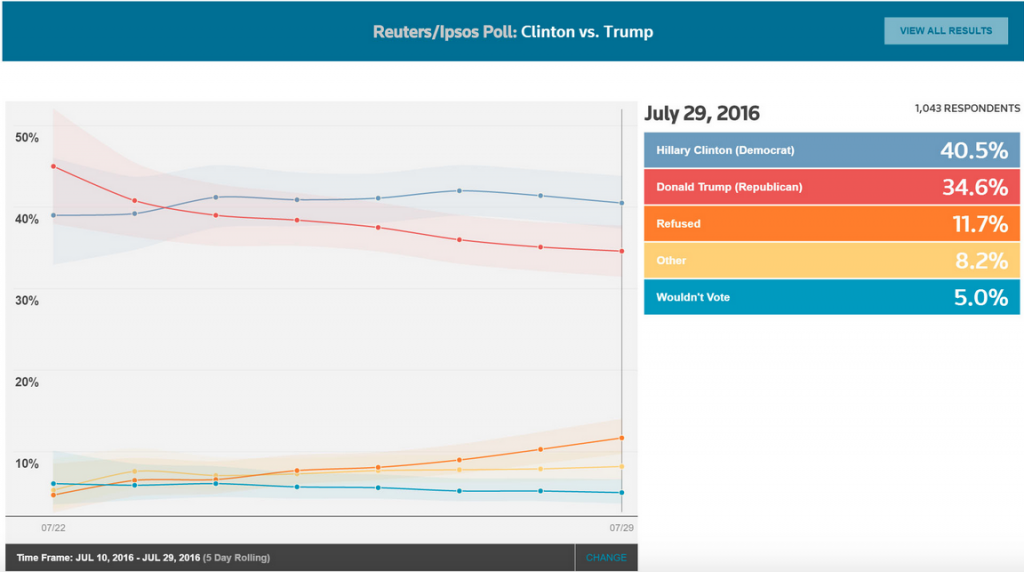 Washington, D.C. – With Trump’s poll numbers climbing dramatically after the RNC, and with Hillary gaining only a moderate bump after DNC, the establishment decided to take action to stem that growth. To emphasize this point, the Reuters/IPSOS poll, for the first time, had Trump taking a 1% lead following the Republican National convention. Trump taking the lead and becoming the frontrunner for the presidency was an unfathomable thought to the political elite establishment as it would destroy the narrative the mainstream media had worked diligently to create.

Obviously, something had to be done – so Reuters “tweaked” its polling methodology – and miraculously Hillary was back in the lead!

Reuters explained their “tweaking” of their polling methodology by stating:

“…in a presidential campaign notable for its negativity, the option of ‘Neither’ candidate appears to be an appealing alternative, at least to participants in the Reuters/Ipsos opinion poll. Many voters on both sides have been ambivalent in their support for Democratic nominee Hillary Clinton and Republican nominee Donald Trump, complicating the task of the pollsters trying to track the race. That sentiment may help explain an apparent skew that recently emerged in the Reuters/Ipsos poll results. Given the choice, a relatively large group of voters opted for “Neither/Other” candidate compared with other major polls, leading to an underreporting of several percentage points for one or other of the two major contenders at times in the race.”

Thus, Reuters/Ipsos amended their choice of wording by eliminating the word “neither,” claiming that it brings their poll in line with other polls.

Don’t be fooled by the media rhetoric, as the real reason for the methodology change is much less benign. According to Reuters, “the inclusion of the word ‘Neither’ is capturing Soft Trump supporters who, if given such an option, prefer not to make a choice. It is important to note that the soft supporter phenomenon also affects Clinton, but to a much lesser degree.”

The resulting effect from the change can be see in the fact that the Reuters/Ipsos poll – pre “tweaking” – had Trump at 40.2%, and Clinton at 38.5%. However, after eliminating “Neither” from the “Neither/Other” option, it dramatically skewed the results, and produced a poll that showed Clinton ahead, 40% to 36%.

Essentially what has happened is that the poll’s phrasing methodology was intentionally “tweaked” to give Hillary an advantage – thus allowing her to maintain the “frontrunner” narrative her presidential campaign and the media attempt to use to her advantage.

Trump has equally done himself no favors, as his attacks on the family of the late Captain Humayun Khan over the past week have proven disastrous to the presidential hopefuls poll numbers. But even prior to the highly unpopular attacks on the Khan family, the new polling methods had already caused a dramatic rebound in Hillary’s numbers.

Just as intended, the results of the “revised” poll propelled Clinton back into the lead.

“Democratic presidential candidate Hillary Clinton held a 6- percentage-point lead over Republican rival Donald Trump, according to a Reuters/Ipsos poll with new wording that was released on Friday, the day after she formally accepted her party’s nomination for the Nov. 8 election.

Nearly 41 percent of likely voters favor Clinton, 35 percent favor Trump, and 25 percent picked “Other,” according to the new July 25-29 online poll of 1,043 likely voters, which overlapped with the Democratic National Convention in Philadelphia. The poll has a credibility interval of 4 percentage points.

The presidential tracking poll reflects a slight change of wording from previous surveys, replacing the “Neither/Other” option given to respondents with just “Other.” An internal review had found the word “Neither” has, at times, siphoned support away from one or the other candidate.”

If Reuters wanted to be honest about what had transpired, they could inform people that the term had “siphoned” away support from Clinton and over to Trump, which was noticed during an “internal review” and was quickly altered in an effort to bolster Clinton’s presidential campaign.

The “slightly revised” Reuters/Ipsos poll goes back only one week, and all prior data appears to have been eliminated from query – making the move appear all the more suspicious.

After the realization that the Democratic nomination was stolen through collusion by the Democratic National Committee and the Clinton presidential campaign, as evidenced by the implosion of the DNC since the WikiLeaks revelations, the “tweaking” of one of the most watched polls in the world must be seen for what it is – just another way the oligarchy is working to put their representative in office regardless of the will of the public.

If you ever wondered how Trump went from having a 1% lead over Clinton to being at 6-point disadvantage in just three days — you now have your answer – simply make an “adjustment” to the poll!

Please share this story to help wake people up to the reality of our rigged election system!