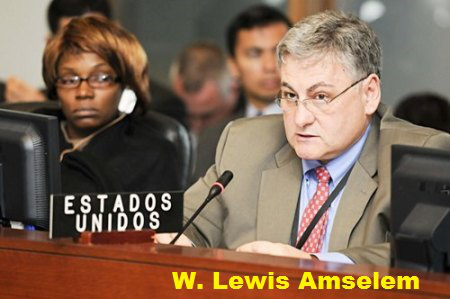 Julian Assange’s WikiLeaks‘ streaming release of the hacked Hillary Clinton emails is a gift that keeps on giving.

The latest is a very strange email from one of Hillary’s State Department Foreign Service officers named W. Lewis Amselem, in which he, jokingly or not, made mention of “sacrificing a chicken in the backyard to Moloch” — a demon to whom child sacrifices are offered. (Amselem is a Sephardic Jewish surname.)

Note: In the Old Testament, Gehenna was a valley by Jerusalem, where apostate Israelites and followers of various pagan gods sacrificed their children by fire (2 Chr. 28:3, 33:6; Jer. 7:31, 19:2–6). One of those gods was Moloch (aka Molech, Molekh, Molok, Molek, Molock, Moloc, Melech, Milcom or Molcom), an ancient Ammonite god who demanded a particular kind of propitiatory child sacrifice from parents.

W. Lewis Amselem is now a retired senior U.S. Foreign Service officer. In 2009 when he wrote that email, Amselem was the head of the U.S. delegation to the Organization of American States (OAS). It is said that Amselem had concealed the identities of individuals, one of whom was a U.S. national, who in 1989 kidnapped, tortured and raped Diana Ortiz, an American nun in Guatemala.

Below is a screenshot I took of the WikiLeaks email (you can see the email for yourself here). The email from Amselem with the reference to animal sacrifice to Moloch is at the end of a series of forwarded email exchanges. (I painted a red bracket around the animal sacrifice phrase.)