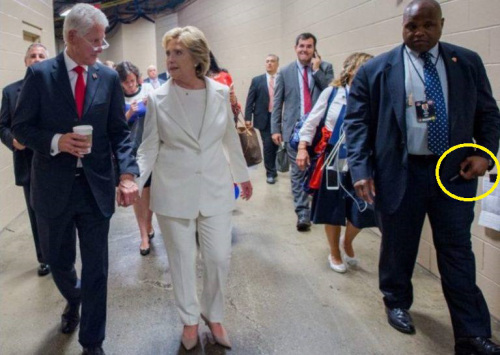 For some time now, no thanks to the establishment MSM, the Alternative Media have been reporting on the many indicators that Hillary Clinton is plagued with a host of health problems. (See “There is something very wrong with Hillary“)

Remember this news video taken on June 17, 2016, showing Hillary having a brain seizure?

The evidence is now overwhelming that Hillary is medically unfit for the highly stressful and demanding position of President of the United States of America.

The evidence is in the form of a photograph showing a burly black man carrying a Diazepam auto-injector pen in his left hand, who accompanied Hillary on her big night accepting her party’s nomination at the Democratic National Convention.

Here’s a close-up of the man and the Diazepam pen he’s carrying:

According to Gateway Pundit, the same man was seen helping Hillary in a recent campaign stop in a Union Hall when she suddenly froze in front of a group of liberal protesters, looking dazed and lost. Seeing this, a group of men rushed to assist Hillary on the stage, one of whom is Burly Black Man. He gently patted Hillary on her back and said to her, “Keep Talking.”

Kyle Olson reports for The American Mirror, Aug. 7, 2016, that the latest evidence of the questionable health condition of Hillary Clinton “comes in the form of Clinton being helped up a set of stairs by multiple individuals outside what appears to be a home. The photos, published by Reuters and Getty, show the 68-year-old candidate with aides holding her arms as she ascends the stairs.”

The Drudge Report gave these other links on Hillary falling in the past:

Presidential candidates are required by law to release their medical reports. Given her “rules and laws are only for the little people” nature, Hillary likely will refuse to. Demand and insist that she does!