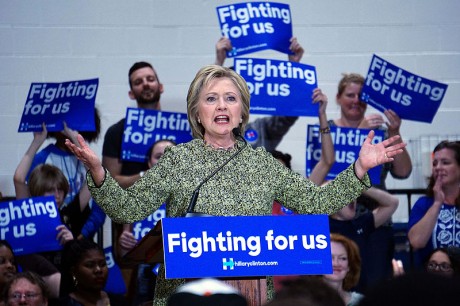 Hillary Clinton’s health is starting to become a major political issue, and there are many that believe that her health problems may force her to drop out before we even get to election day. On Sunday evening, the Drudge Report ran a photo of Hillary struggling to get up a set of stairs along with this headline: “2016: Hillary conquers the stairs”. Well, it turns out that particular photo was about six months old, but it sparked a much deeper debate about Hillary Clinton’s health. As you will see below, Clinton has been having seizures even while in public, she has been regularly having horrible coughing fits, she has a very large hole in her tongue that has not been explained, and she has been falling down way too often for a woman her age. No matter whether you are for her or against her, it should be apparent to everyone that this is a woman that has some very serious health issues.

Let’s start with Clinton’s very curious behavior during a recent campaign stop. When she suddenly froze up, she was rapidly approached by a large African-American man that appeared at first glance to be a Secret Service agent. The following comes from Gateway Pundit…

In a recent campaign stop in a Union Hall in front of a sparse crowd, at about the time when some liberal protesters began to protest, Hillary Clinton suddenly froze. She looked dazed and lost. Seeing this, a group of men rushed to assist the candidate on the stage. One man however gently pats the candidate’s back and then says, “Keep Talking.”

Since that time, it has been reported that the very large African-American gentleman that was initially reported to be a Secret Service agent is actually a doctor instead, and as you can see here it appears that he is carrying with him the kind of auto-injector that is commonly used to inject someone with Diazepam…

If you are not familiar with Diazepam, it was originally called Valium. Here is more on this particular drug from Wikipedia…

Diazepam, first marketed as Valium, is a medication of the benzodiazepine family that typically produces a calming effect. It is commonly used to treat a range of conditions including anxiety, alcohol withdrawal syndrome, benzodiazepine withdrawal syndrome, muscle spasms, seizures, trouble sleeping, and restless legs syndrome.[3] It may also be used to cause memory loss during certain medical procedures.[4][5] It can be taken by mouth, inserted into the rectum, injected into muscle, or injected into a vein.[5]When given into a vein, effects begin in one to five minutes and last up to an hour.[5] By mouth, effects may take 40 minutes to begin.[6]

It is quite noteworthy that this drug is often used to treat “seizures”, because Clinton seems to be having them with frightening regularity these days. In this video, you can watch Clinton go into a seizure in public with a bunch of reporters around…

So why won’t she just be honest about this? Well, because Trump would immediately pounce on the issue and that is the last thing she wants. She doesn’t want voters questioning whether she has the physical capability to fulfill her duties as president. Wikipedia also says that those that are elderly “are more prone to adverse effects of diazepam, such as confusion, amnesia, ataxia, and hangover effects, as well as falls.” As Susan Duclos has noted, Hillary Clinton has fallen and seriously hurt herself numerous times in recent years…

While the most recent image of Hillary Clinton unable to climb a short set of stairs without the help of two Secret Service agents has set the Internet abuzz after the Drudge Report headlined with the image while blaring “Hillary Conquers The Stairs,” we note multiple examples over the years, which include but are not limited to Hillary falling in 2009 on her way to a White House meeting and fracturing her elbow,falling while entering a plane in 2011, Hillary falling asleep while attending an Obama speech in Myanmar in November 2012, just one month later she fell in her home which led to a concussion in December 2012 andsubsequent blood clot on the brain, her coughing fits which go back years…… all pointing to a rapid physical decline.

At the top of this article I also mentioned the strange hole that has now appeared on her tongue. You can see a photo of it for yourself right here…

There is much speculation about what may or may not have caused it, and hopefully Clinton will come forward and tell us the truth soon so that all of the speculation can be laid to rest.

Meanwhile, Hillary’s coughing fits have also been making headlines. If you don’t know what I am talking about, Here is just one example…

Of course Hillary Clinton could never possibly match Donald Trump’s energy level and immense workload, but at this point she has really cut back her schedule. As I write this article, she appears to only have one scheduled public rally between now and October 19th.

That seems quite odd for a candidate for president of the United States.

Could her health be a factor?

Of course many in the mainstream media are absolutely determined to try to destroy these “rumors”. For example, the Washington Post just published a story entitled “Armed with junk science and old photos, critics question #HillarysHealth“.

But these “rumors” are not going away. Every time Hillary Clinton has another coughing fit, another seizure or another disturbing fall, the alternative media is going to jump on it right away.

If Donald Trump was having these kinds of health issues, you can rest assured that the mainstream media would be all over it. As it is, they are running anti-Trump headlines 24 hours a day and we are still about three months away from the election. These are just a few of the anti-Trump headlines that I came across today…

-“Reagan Republican: Trump is the emperor with no clothes”

-“50 GOP officials: Trump would be ‘most reckless President in American history’”

If you’re a working journalist and you believe that Donald J. Trump is a demagogue playing to the nation’s worst racist and nationalistic tendencies, that he cozies up to anti-American dictators and that he would be dangerous with control of the United States nuclear codes, how the heck are you supposed to cover him?

According to Real Clear Politics, Hillary Clinton is leading in all of the recent major polls, and the mainstream media is going to continue to try to destroy Donald Trump.

But what happens if Hillary Clinton’s health completely fails and she is ultimately unable to make it to election day?

What would the Democrats do?

I don’t know what would happen in such a scenario, but we might soon find out…