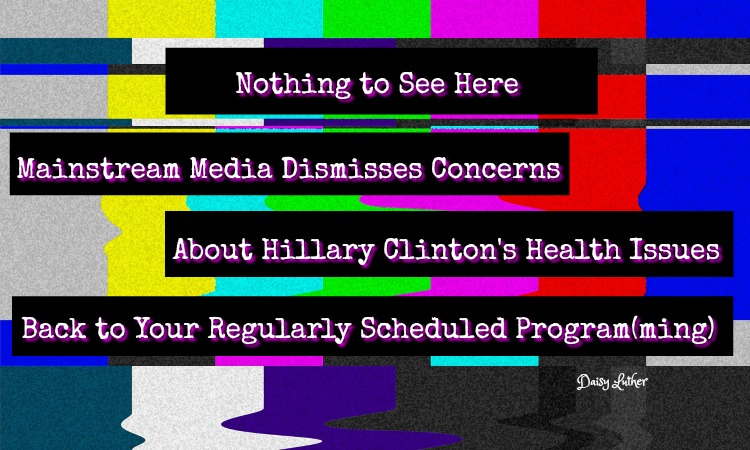 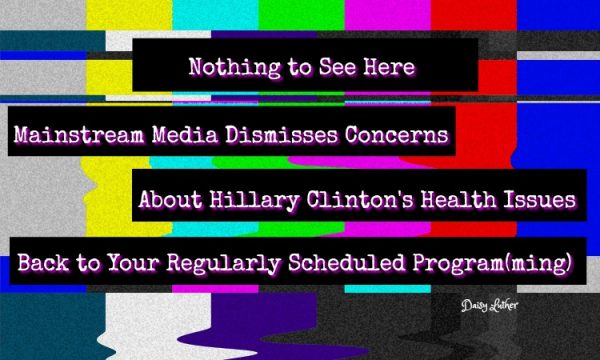 In their usual fingers-in-ears-la-la-la fashion, the mainstream media and Hillary Clinton supporters are all in denial that there is an issue with the Democratic nominee’s health, despite mounting evidence that something is seriously wrong. In fact, they’re trying to manipulate the issue to make those who are concerned look like they are the ones with problems because only crazy right-wing conspiracy theorists would say otherwise.

This weekend, a photo began to go viral of HRC being helped up the stairs and looking pretty darned frail. But, if you notice, she isn’t dressed for summer in these photos. While the photos are making the rounds like the event just happened, it was actually snapped about six months ago, when she slipped going up some stairs in South Carolina last February. The mainstream delightedly jumped on the date of the photo as proof that everything is rosy in Clintonland.

This, of course, doesn’t negate the fact that “slipping” has been a recurrent theme for Hillary Clinton, and actually just supports the argument that she’s dealing with some type of neurological issue.

Now, I’m not exactly as graceful as a ballerina myself, and HRC’s apparent klutziness is not really the issue. Here are some more interesting facts about her health that the mainstream media ignores:

If Hillary Clinton does indeed have neurological issues, it could explain the angry outbursts that had her husband walking around with a black eye, calling handicapped children visiting the White House “f***ing retards,” and compelled a former Secret Service agent, Gary Byrne, to write an entire book about her rage issues. Byrne is not the first agent to write about her bad behavior. A previous book was written by  Ronald Kessler, in which he recounts a story of saying “good morning” to the then-First Lady, and getting the response, “F*** off.”

The mainstream media is covering for her

Okay – we all have sympathy for health issues, but we are talking about a mystery issue that causes bouts of unreasonable rage, seizures during stressful situations, and makes a person overwhelmed and disoriented when there is a lot going on…..does the mainstream somehow think that once HRC is in office, the stress will disappear? How will one of those bouts of rage go over if the next time shethrows a Bible at someone, she whacks Vladimir Putin upside the head?

And yet, from the mainstream, we get this condescending piece which was posted on CNN:

In conspiratorial corners of the conservative media, doubts about Clinton’s health and stamina have persisted ever since she had a health scare in 2012. Some armchair commentators even predicted Clinton wouldn’t be able to run for president in 2016.

They were clearly wrong, and the health concerns are largely considered a fringe issue. Her personal physician said one year ago that she was physically fit to serve as president.

But given all the past chatter about her physical condition, the message from the pro-Trump accounts was clear: Clinton can barely walk.

A right-wing blog called The American Mirror picked up on the tweets and published a short story on Sunday. “SHOCK PHOTO: Multiple staffers help unstable Hillary up stairs,” the headline said.

The story asked, “At what point is the mainstream media going to question Clinton’s health status?”

Notice that the article doesn’t address, the coughing, the seizing, the double vision, the anger, or the confusion.  All we have to go on are the words of HRC’s “personal physician.”

The Washington Post goes even further, casting insults and offering their opinions on the issues mentioned by conservative outlets. The post makes it seem like the doubts about Clinton are purely the domain of crazy, right wing conspiracy theorists. Here are a few choice quotes from the article titled, “Armed with junk science and old photos, critics question #HillarysHealth”:

Regardless of the coverup, we do have the right to know the truth about Hillary Clinton’s health, but truth and HRC never seem to be close companions. Not only is the campaign itself covering for her, but the mainstream media is as well. Aside from a few influential media outlets like Drudge Report, Zero Hedge, andBreitbart, you are only hearing this from bloggers who are screaming it from the rafters.

So what can we do about this?

There is power in refusing to be silent. We can ask these questions and share this information. We can voice our doubts and make sure that people can’t ignore these photos and videos of what are most certainly serious symptoms. We can uncover the coverup.

There’s only so much that the mainstream can do to hide this. We must demand answers.

Frankly, I’m not even sure Hillary Clinton is healthy enough to make it through the election, more less, run the country.