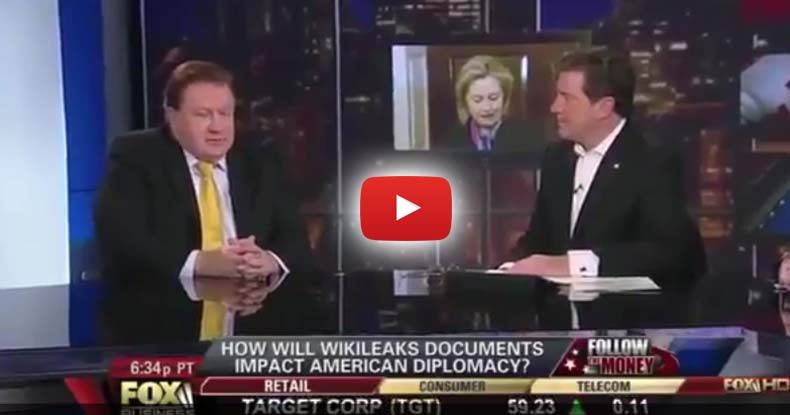 Hillary Clinton strategist Bob Beckel appeared on on Fox calling for the assassination of Julian Assange — a blatant urge for violence against the Wikileaks founder in direct contradiction of every possible natural and government law.

Wikileaks, of course, has published several damning caches of documents showing Clinton in none-too-favorable light — including emails from her controversially-employed private server as well as communications from the DNC which proved her campaign colluded with mainstream media.

That’s right: A Democratic National Committee strategist — knowing Clinton’s reputation has been profoundly damaged by revelations brought to light by Wikileaks — feels Assange’s defiance of the law is so egregious, someone should take it up a notch by “illegally” assassinating the organization’s founder.

Apparently getting caught red-handed as the DNC now clearly has been, requires an altogether insane response of death outside the provisions of law.

“I can’t wait to write a defense of the drone strike that takes out Julian Assange,” Grunwald arrogantly asserted.

Politico, it must be noted, appeared prominently in the DNC leak for working in tandem with Clinton campaign staff to ensure articles would display Hillary in the best light possible — one journalist even shared an article with Hillary’s campaign staff prior to submitting it to editors.

Prior to these explosive calls to hunt down and kill Assange, the Wikileaks head appeared on Dutch outlet Niewsurr, where he seemed to suggest murdered DNC staffer Seth Rich had been a source of the leaks so infuriating Beckel and Grunwald.

“I’m suggesting that our sources take risks and they are — they become concerned to see things occurring like that,” Assange said of Rich, who was murdered early in the morning in what authorities have thus far insisted was a robbery — though there were no witnesses to his killing to back up or refute that claim.

“We have to understand how high the stakes are in the United States,” Assange continued when pressed by the host if he was implying foul play in Rich’s untimely death. “Our sources are — you know, our sources face serious risks. That’s why they come to us. So we can protect their anonymity.”

Assange has repeatedly refused to reveal Wikileaks’ sources, as a rule — a policy the organization prides itself on — and in keeping with that, refused to reveal with certainty whether or not Rich had indeed been the source of any leaks.

Rumors about Rich have certainly run the gamut on social media, but several suspicious circumstances must be considered. As Underground Reporter noted, Rich had reportedly been slated to testify in one investigation of Clinton. And according to the Washington Post, Rich had been investigating possible instances of fraud and voter suppression perpetrated by the DNC.

Assange, as The Free Thought Project noted, has additionally offered a reward of $20,000 for information leading to the conviction of Rich’s murderer.

Perhaps the call for Assange’s assassination by a Clinton lackey shouldn’t come as much of a surprise given the aforementioned extenuating circumstances — but it certainly lends yet more credence to growing sentiment that Hillary Clinton and her cadre of establishment supporters will quite literally stop at nothing to ensure she reaches the White House.