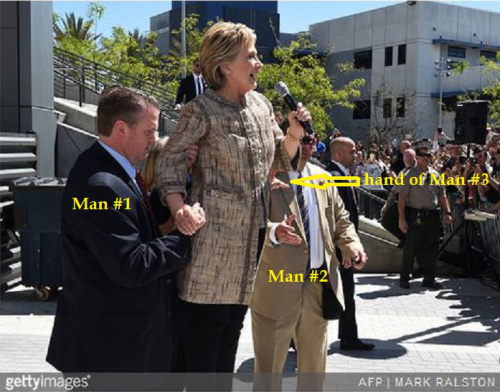 You saw this recent pic of Hillary being helped up the stairs by two men:

Now, Kristinn Taylor of Gateway Pundit has discovered another photo of Hillary being held by a man to keep her from falling.

The photo was taken in April during a campaign stop in Los Angeles, by Mark Ralston of AFP/Getty Images. (FOTM is publishing the photo as “fair use” in accordance with section 107 of the US Copyright Law.)

The photo above shows Hillary Clinton being firmly held up by a man on her right side (Man #1) to keep her from falling over as she leans slightly forward speaking to the crowd with a microphone in her left hand. Man #1’s right hand is clasping Hillary’s right hand, while his left hand grasps her upper arm.

Another man on Hillary’s left (Man #2) has his right hand and arm extended, ready to assist her. Behind Hillary is an obscured third person (Man #3) whose extended hand can be seen reaching out under Hillary’s left elbow.

“insiders on the campaign trail are whispering that Hillary’s bizarre new fashion choices [of long tunics or jackets over pants] are also really cover for her medical woes. ‘People are mocking her outfits that look like they come from a ‘Star Trek’ movie,’ said one journalist following her campaign, ‘but there’s speculation that they also cover up that she uses adult diapers for incontinence.’

In the early days of her presidential campaign, Hillary’s energy level originally seemed ‘good so far,’ confided a close source — who added, ‘but behind the scenes, she appears exhausted, dazed and confused at times.’ Insiders said that her most trusted aide, Huma Abedin, even sleeps in her hotel room to keep an eye on her ‘in case there’s a medical emergency.’”

Born October 26, 1947, Hillary Clinton is 68 years old and should not require help going up a few steps or standing up to speak. But these photos clearly show that she does need help. That’s because she has a history of blackouts, falls, memory loss, blinding headaches, vision problems and collapses — which dates back at least a decade. They include:

An unsteady gait, clumsiness or frequent falls, are symptomatic of subcortical vascular dementia (see “Bombshell: Hillary Clinton has dementia according to leaked medical records“). Dizziness, blurred or double vision, clumsiness, loss of balance, and weakness in an arm or leg are early symptoms of multiple sclerosis (see “Hillary Clinton said to have multiple sclerosis; a stroke risk”).

Whether due to subcortical vascular dementia or multiple sclerosis, Hillary’s frequent falls and double vision are symptomatic of a neurological problem that will only get progressively worse.